Please Share this article is useful !
John Napier, ahir at Merchiston Castle, near Edinburgh, Scotland. Son of Sir Archibald Napier of his first wife, Janet Bothwell. When the age of 14 years, Napier was sent to the university St. Andrews to study theology.

After wandering abroad, Napier returned to my hometown in 1571 and married Elizabeth Stirling and has two children. In 1579, his wife died and married Agnes Chisholm. This second marriage gave her ten children. The second child of the second wife, Robert, later became his father's translator works. Sir Archibald died in 1608 and John Napier replace, Merchiston Castle lived in all his life.

Napier is not a professional mathematician.  Scotland, he was a Baron who lives in Murchiston and has a lot of ground, but also have a hobby of writing a variety of topics that interest her. He was only interested in examining one aspect of mathematics, particularly relating to the calculation and trigonometry. The term "framework Napier" (Napier frame) refers to the multiplication tables and the "Analogy Napier" and "Law sections Napier circle" is a tool to remember in relation to the trigonometric circle. 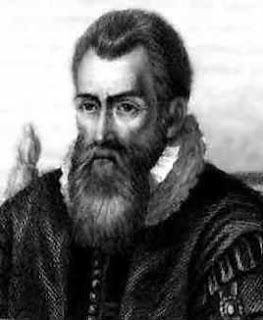 Napier said that the research and discovery of logarithms happened twelve years ago before being published. This statement points out that the basic idea occurred in 1594. Although discovered by Napier but there is a role predecessor. Stifel wrote Arithmetica integra on 50 years ago with the works of Archimedes guidelines. Numbers with power of two is essentially, though not to be used for calculation purposes because the difference is too big and no interpolation method gives accurate results.

Effect of thought Dr. John Craig can not be ruled out, affecting John Napier. Meeting this accident happened, happened when the group Craig on his way to Denmark by boat, there was a huge storm that makes this group a stop not far from the observatory of Tycho Brahe, not far from where Napier. While waiting for the storm to pass, they discussed ways of calculation used in the observatory. This discussion makes Napier so much more motivated in 1614 published the book description of the rules in logarithmic (A Description of the Marvelous Rule of Logaritms).

Early discovery of Napier is actually very simple. Using a geometric progression and integral simultaneously. Take a certain number close to 1. Napier uses 1-107 (or .9999999) as numbers. Now, the term progression of ever-increasing power until the end result is close - very little difference. In order to achieve "balance" and avoid going on (number) decimal multiplied by 107.

Keep in mind that Napier did not have the concept of logarithms as a basis, as we know it today. Napier operating principles will be more clearly by using the concept of geometry below.

Eccentricity
Although Napier made great contributions in the field of mathematics, but the greatest interest in religion precisely Napier. He's a strong Protestants who wrote his views in his description of the discovery of the revival of St. John (A Plaine Discovery of the Whole Revelation of Saint John (1593), who bitterly attacked the Catholic Church and insulting the King of the Scots, James VI (later James I, king of Britain) by calling an atheist.

Another area that interests Napier, a landlord, was managing the farm. To improve soil fertility, Napier tried to fertilizer salts. In 1579, Napier invented the hydraulic pump to raise the water from the well. In the military field, Napier plans to create a giant mirror to protect Britain from invasion naval King Philip II of Spain. Both Napier discovery is no different with the discovery of Archimedes.

There are anecdotal, that as a landlord, Napier is often at odds with the tenants (land) and its neighbors. An event, Napier was disturbed by the neighbors pigeons which he felt was too much. The threat that the pigeons would not respond tetaangganya arrested, because they believe that Napier is not possible to arrest all the pigeons. The next day, all the neighbors were surprised to find a pigeon flapping - not dead - slumped in front of the house. Apparently Napier had fed the corn is first soaked with wine.

Once the first book was published, mathematician enthusiasm spread so much of their visit to Edinburgh. One of the guests was Henry Briggs (1516 - 1631), during which Briggs informed the meeting about the modifications made to Napier. Changing the logarithm base to 1, not 107, the result is zero and using base 10 (decimal). Finally found a log 10 = 1 = 10 º.

Napier died in his castle on the 3rd of April 1617, and was buried in the church of St.. Cuthbert, Edinburgh. Two years later, in 1619, published a book of beauty logarithm Construction (Construction of the wonderful logarithms), compiled by Robert, son.

Finding the logarithms basic concepts, before being developed by other mathematicians - especially Henry Briggs - so as to provide benefits. This discovery brought a major change in mathematics. Johannes Kepler helped, because the logarithms, can improve the ability count for the astronomer. "Miracle" came to be called by the algorithm [Florian] Cajori as one of the three important discoveries for the mathematics (the other two are notation-based Arabic numerals and ten fractions / decimals).