✖
Home Biography Biography of Jose Mourinho - The Special One

Biography of Jose Mourinho - The Special One


Please Share this article is useful !
José Mário dos Santos Félix Mourinho or Jose Mourinho, born in Setubal, Portugal, January 26, 1963, Mourinho studied at universities in Lisbon and earned his degree in exercise science with a thesis on the methodology soccer. He quickly switched professions from teaching, coaching junior teams and a translator for Bobby Robson at Sporting Lisbon, then became an assistant coach when he followed Robson moved to FC Porto and Barcelona. In Barcelona, ​​he became assistant to Louis van Gaal, and then in 2000 he returned to Lisbon and Benfica coach.

In 1989, he married Matilde, who has known since childhood. They had two children: Matilde and José Jr.. Mourinho tied to advertising agreements in Europe with Samsung, American Express and other companies. Official biography to be 'best-seller' in Portugal. He was instrumental in many of the world's social activities, such as youth projects for the children of Israel and Palestine as well as similar programs in the country. On 16 May 2007, Mourinho was arrested on charges against police officers as police officers will quarantine the dog.

On March 23, 2009 Mourinho eraih degree of Doctor Honoris Causa of the Technical University of Lisbon, Portugal. Had rumored divorce with his wife, Matiilde "Tami" Mourinho has given him two children, Matilde and Jose Jr. of the ark that has didayuh household for 20 years. Some media proclaim that if the former Chelsea coach often shop in Milan alone. But in the end their households remain fine. Mourinho named best coach of the world by FIFA on January 10, 2011 at Ballon d'Or Gala in Zurich, Switzerland 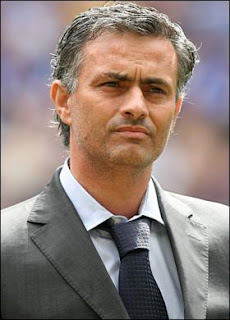 Former Benfica coach is known by his comments were very sharp and controversial. On arriving at Chelsea in 2004, he referred to himself as the "special" (The Special One). Coupled with a stylish appearance "movie star", he often targeted on the main page news and gossip. Profile become one occupant wax statue at Madame Tussaud's in London. He was known as a coach with a strong personality and was able to instill a winning mentality in every team at hand. Although the strategy is often criticized for playing negative football, he is a valid guarantee achievement. Not infrequently Mourinho called "trophy specialist trainer" with its success won four domestic trophies in four different countries.

Mourinho took over coaching Porto in January 2002 from the hands of Octavio Machado. For two and a half years at the club, he took home six trophies and had won the Treble Winners in 2003. He left Os Dragoes (called Porto) on May 31, 2004 to then anchored to Chelsea.

Son of Jose Felix Mourinho was introduced as coach of Chelsea on June 2, 2004. His first year as manager (2004-2005), succeeded in making Chelsea the Premier League champions after a waiting period of 50 years. In the next period, 2005-2006, he again led Chelsea to win Premier League without difficulty. In the third year, 2006-2007, Chelsea suffered many trials because of a serious injury of the main players, including goalkeeper Petr Cech, second goalkeeper Carlo Cudicini, captain John Terry and Joe Cole, all of which require a long break. However, during the period 2006-2007 on this, Mourinho still managed to deliver double as Chelsea won the Carling Cup and FA Cup.

On 20 September 2007, Mourinho suddenly decided to leave his post as coach of Chelsea by "mutual consent" after meeting with club officials. With the departure of Jose from Chelsea, the Premier League lost "the special one" (the nickname for Jose Mourinho) are famous for their comments are always in the spotlight of the press and other coaches.

After nine months of not training, on 2 June 2008, Mourinho was appointed the official Inter Milan coach Roberto Mancini replaces sacked on May 29, 2008 or 72 hours before the appointment. By Massimo Moratti he targeted the 2009 Champions League final will be held at the Stadio Olimpico, Rome, Italy May 27, 2009.

On 24 August 2008, Mourinho won his first trophy for Inter in the Italian Super Cup after beating AS Roma 6-5 on penalties after a 2-2 balanced normal game for 120 minutes plus extra time. But expectations will Moratti Champions League away when Inter lost 0-2 on aggregate in the last 16 of Manchester United on March 11, 2009. Mourinho through his first season with Inter Milan in Italy in the 2008-09 season with success when Inter won the Italian League Serie-17-A. Inter Milan won the title after a 1-2 defeat of Udinese. The success of this, his contract was extended until 2012.

Arguably the 2009-10 season Inter under Mourinho's golden era. Moreover, 28 April 2010, his team successfully put holders FC Barcelona in the Champions League semi-final with a 3-2 aggregate. Automatic results were brought Inter advanced to the finals and will challenge Bayern Munich on May 22, 2010 at the Santiago Bernabéu Stadium. This is the first final La Beneamata since last 38 years. Achievement is made Mourinho's name increasingly flying and became an interest of Europe's elite teams such as AC Milan and Real Madrid to make himself as coach next season. In addition to the Champions League, Inter won the Coppa Italia chance and Serie A. Coppa Italia trophy was the first achievement of three of the coveted trophy in the 2009-10 season, Mourinho and his men successfully defeating AS Roma on May 6, 2010 at the Stadio Olimpico.

On May 16, 2010, he again led Inter to the Italian league championship ladder at the same time noting that the Inter Scudetto-18 and in five consecutive seasons after smothering Siena 1-0 at the Artemio Franchi. At the Santiago Bernabeu stadium on May 23, 2010, Inter with Mourinho recently made history after beating Bayern 2-0 with Milito gold feet on the Champions League Final match. Inter became the first Italian team in history to win the Treble Winners.

Success with Inter Milan made Mourinho wanted to go and look for another challenge, precisely in Spain. After Real Madrid president Florentino Perez sacked Manuel Pellegrini on May 27, 2010, Jose Mourinho was appointed as coach of Real Madrid. On 31 May 2010, Mourinho was presented to the media. On 21 April 2011, Mourinho gave Copa del Rey trophy to Real after defeating Barcelona 1-0 in the final. It is the 18th trophy for the club after 18 years (last won in 1993). The cup is also Mourinho's first title in Spain. Upon success, Mourinho has now become the first coach to be able to reach the domestic cup in four different countries (Portugal, England, Italy, and Spain).