Please Share this article is useful !
Joseph Priestley was born in an area near Leeds, England on March 13, 1733, Priestley never actually studied science formally. However, Priestley is a person who is always determined to learn something. His attitude of tolerance and liberal became one of the capital success. Capital that includes ways of thinking, curious and never satisfied for a work. This is evident from the years of life that is never devoid of achievements, including some papers resulting from the branch of science that is different.

At the age of 28 years, Priestley, who was interested in the language, resulting article titled The Rudiments of English Grammar (Fundamentals of English Grammar). The article is an explanation of Priestley about English grammar, as it is studied today.
Interested Start Science

His interest in science came from his acquaintance with Benjamin Franklin a year after Priestley was awarded a doctorate in law because his article titled Chart of Biography in 1765. Benjamin Franklin, who was indeed a scientist who studied electricity, has raised interest in science Priestley. Priestley's dynamic personality proved again. A year friendship with Franklin already running and it was a friendship that was not in vain because Priestley re-generate paper. This time he published The History of Electricity. In addition to producing the work, Priestley was found that carbon is a good conductor of electricity. 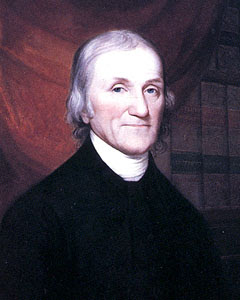 On June 23, 1762, Priestley married Mary Wilkinson of Wrexham. Only 5 years the couple lived in Wrexham. In September 1767 they had to go back to Leeds because of the financial condition and the condition of her health. In Leeds, Priestley fecundity in writing continues to flow. He published two books of political, Essay on the First Principles of Government in 1768 and the Present State of Liberty in Great Britain and her Colonies in 1769. In the same year, Dr. Priestley also wrote books. Blackstone's Commentaries, the book containing his defense of the constitutional rights of the defectors against William Blackstone, the ruler of the time.

Do you know who invented the drink soda? Not many know that the inventor Joseph Priestleylah soda. Starting from the brewery which is located across from his home, Priestley was intrigued by the air on the surface of fermented grain that feels different. He also studied the properties of air to extinguish the flames from the combustion of the wood pieces. Priestley called the gas with the name 'gas bound' (fixed gas). Encouraged great curiosity, Priestley produces its own 'definitely gas' is in the house, they dissolve in water to obtain water that tastes sharp. That carbonated water, which is now very popular as soft drinks! He enthusiastically offered water as the experimental results refreshment to his friends.

Finding Gas Ketawa
Laughing gas is the discovery of another Priestley. Arguably, laughing gas is one of Priestley's discovery made by accident. His interest in science are increasingly being encouraged to design a device that contains mercury. The tool is heated with the help of sunlight that is passed on the magnifying glass to produce a focused beam of high-energy that can produce heat. Warming produces various gases, including gas dinitrogen monoxide or laughing gas. It did not take long until people recognize these findings, given the gas is inhaled will cause anyone laugh out loud.

Expelled Because of the French Revolution
Priestley seems destined to become king of the inventor of the gas. As if not satisfied with the invention of carbonated gas and laughing gas, he discovered oxygen in 1774. He did not realize that this discovery has actually been discovered by Carl Wilhelm Scheele before the year 1773. Priestley's discovery, later published in 1775 in his book Experiments and Observations on Different Kinds of Air. The Scheele published his book entitled Chemical Treatise on Air and Fire in 1777. Both of them do not realize that oxygen is a chemical element. Priestley named the gas discovery as 'de-phlogisticated water' according to the instructions of the phlogiston theory which was then believed. In these experiments, Priestley was able to identify eight gas as well as deny the opinion at the time stating that there is only one kind of air.

In 1780 he went to Birmingham and was appointed junior preacher. Name the famous Priestley as a member of the Lunar Society. However, his admiration for the French Revolution ousted him out of town.

To commemorate his services, the community set up a pillar Priestley, of which the monument named Moonstones and a more traditional memorial in Chamberlain Square in the center of town. Most recent monument is an obelisk made of marble, originally created by A. W. Williamson in 1874. Then, in 1951 the entire marble coated with bronze.

Three sons migrated to the United States in 1793. Priestley followed three sons seeking freedom of religion and politics. Although never change his nationality, he settled in Pennsylvania until his death.