Please Share this article is useful !
Henry Ford was born on July 30, 1863. He entered the school at age 5 by her mother. When will depart he must jogged to school within approximately 2 ½ miles away. And the distance of the same back home in the dark had fallen, got home.

By doing so he had to bring lunch from home to eat lunch at school. Three years later he was transferred to another school by his parents but still within the same distance. Ever since I was little Henry has been paying great attention to the various machines. It is very worrisome father.

His father, William Ford wanted his son would become a farmer or a large and successful trader because he himself was a descendant of a farmer. However, Hendry is not interested in the farm. Her passion for the machines is often difficult for him sometimes, because he had to fight against his will. 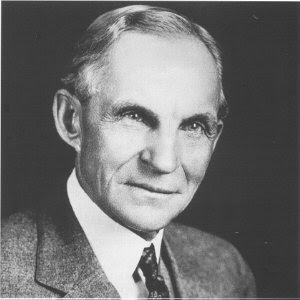 One day a farmer came to school Henry angrily. He complained to the teacher at the school, and told about the behavior of some school students. They were led by Henry to stem a small river running through farm fields have farmers earlier. The dam resulted in the flow of the river to a standstill and resulted in flooding of the ungodly.

The teacher immediately turned and said to Henry, "What kind of work is, Henry?", The teacher asked angrily. "Why, ee" Hendry said without dismissively, "We did not do anything and flooded fields, we just built a dam to block the water to the water wheel experiment for grinding coffee. Dad can see how powerful a tool it works ". Henry evasive. Immediately teacher was angry and mengukum Henry. Then he said to the other disciples, "You must learn to respect the community, and help him. Do not I always told that every time you go home? (Annoyance is pronounced the teacher to entertain the farmers angry before. But he was impressed with the work that has been done by his students).

After the experiment above is considered quite successful, Hendry became more diligently learn the ways of the machine work. At school one day, during a lesson, in progress, he proudly told her friends about the machines he knows. His friends became interested and crowding around him resulted in impaired learning. Suddenly the teacher came into the middle of the crowd. "Henry," the teacher snapped furiously and looked his disciples, "Do not you ever try to learn how good? What's the point of you coming to this school. Ha? Now you have to stay with Henry after class lesson later ".

His teacher gave them a machine that has been destroyed first. "You have to fix this machine!" Snarled his teacher. "If you can not fix it, you will get punished again." However, Henry deftly working on the machine in just less than 10 minutes immediately finished. His teacher so amazed at the talent these students. Skills in the field of machinery that makes it become a popular guy. He often repairing machines neighbors. Many people are amazed at Henry's talent, but his father hates the job. William Ford wanted his son to be a good farmer. But it can not be averted respect Henry has a great willingness in this field.

Having grown up, and was able to live independently. Henry asked for the blessing of their parents to try to live migrate. He walked to the city of Detroit. In this city he found work in a factory. He earns $ 2.50 a week. But he had to pay 3.50 dollars to the cost of living in the same time. So to cover the shortfall, he adds an extra job as a waitress at a jewelry store. From this store he receives 2.00 dollars. Nine months he worked in the factory, while a waitress at a jewelry store when I got home from work at the factory. One day, he suddenly got the news about his father's illness. His father asks Henry to come home soon. Henry can not do anything but fulfill his father's request. He had to go back to the fields!

While working as a farmer, Henry had the idea to create a kind machine that can work as a plow in the fields. He did not approve of animals employed in the fields and orchards. They are a lot of eating. During the winter they do not work, but kept eating. Henry created a machine that can work in the fields to replace the animals without having to constantly feed him. Findings, it is a very significant contribution to the creation of agricultural machines later. Many people are attracted to the idea. In addition, he is also helping many of the neighbors have gradually put the machine in their fields. Henry is people are so proficient in the field of engineering, that he was known as an engineer only one in the area that lasted for several years.

Because they can not leave the farm for his father's illness. Then he noticed a lot of problems and deficiencies suffered by the farmers. He concluded that farmers do not need to pay that much to 24 days in a year to work producing food. Henry said to his neighbor, "If time plowing, tilling the land and reap better, farmers have to use machines or mechanization. Besides the work done faster, it can also provide a decent wage. Fields are processed by way of mechanization can and will reduce the cost of operations, in addition to the work can be completed properly, farmers can also enjoy the farm with a decent income. "

Henry Ford invented the first farm when he was 20 years old. The first trial of the strange-looking machine. It is only able to move 40 feet then suddenly stop. "I hope the whole machine is capable of plowing fields in a short time," said Henry, "But this discovery does not have any meaningful power." The first tractor was still await discovery in the country, the use of fuel.

Meanwhile, Henry Ford enjoys a cute girl in another city. But it is not like a sweet girl. Henry thought of a way to solve that problem. He bought a set of legerdemain and borrowed a horse belonging to his father's sweet. Then he made a cloak of satin. Furthermore, establishing a group home magic near Clara Bryant, who lured her daughter was. By doing a sweet vest dress, and lots of pockets, as well as a clock of its own and two handkerchiefs, Henry shows his skill in playing magic. Henry held two performances are always interesting at the time. It is at once achieved what he wanted, conquered the hearts of Clara Bryant, who originally did not like him.

"Mother," said Clara Bryant told his mother one morning, "I think the man named Ford who entered the show with his friend beside the house, I'm sure he'll be famous in the world." Henry did not waste that opportunity. A few weeks later he went to his father and said, "Dad, in case I decide to marry, what to give to my father?" William Ford thought for a moment and then said, "You will get eighty acre (1 acre equal to 4072 m2) of land , all pekayuan you wish you could cut yourself on a home.

"Well", cheers Henry. Then he began to cut down trees on land given by his father. Partly to be prepared to build a house for a family someday. Ultimately what he wants to marry Clara reached. Henry and Clara married in Apil 1888. They live by working on the farm for three years in his father's administration. One night Henry said to his wife: "Clara, I am sure we will be more successful, if we could move to Detroit. I will keep a carriage there. Here I was too busy! "Henry later explained to his wife about his ideas for making vehicles powered by engines.

In Detroit he got a job at the company lights "Edison" at night, while during the day he made his chariot to run. For two years he had been able to train his horse to run. He has spent a lot of time in the shop made from simple bricks, while around its neighbors to see acted, thought Henry was crazy.

"A horse-drawn carriage!?" They said, "If you will go if Henry did not push it." But Henry Ford remains at its founding. Henry did not stop working in his shop. He poured all his attention to the concentration of the idea. "What goods are those fools doing?" Said the people who saw Henry's behavior. Then they douse it with water. Henry Ford was not able to do anything about it, he was in a very poor state.

One morning in 1893 a horse-drawn carriage, ready to be tested. With strong determination and a steely deft Henry Ford start operating the train, which is very stun and smoke steaming in the air. The train rolled out of the factory to the highway. But not much running. Just a few feet from the garage to move suddenly dies, and can not because they do not have the winding wheel. However, the train engine back to life so now Henry has to prove to the people around him who had been considered funny, dumb, and stupid, it's not the case. That night, Henry the train's designers feel very satisfied and happy with the findings. The work was celebrated with a glass of hot milk, then slammed his shirt soaked with sweat it into the fire, then jumped into bed. To enjoy a beautiful dream for the first time after leaving the farm.

When the train creations tested for the second time, his wife took part, namely as a passenger. Their creativity that caused a sensation? Some horses suddenly startled, then run like crazy is not necessarily the direction, when the train was passing nearby Henry. Sounds kereka raises cries that sensitizing the ear, Lantara hard. Suddenly the train was stopped because the engine died. People see the absurdity of it rushed, surrounding objects they had never seen before. Immediately they cheered, partly amazed, but most showed anxiety.

A large number of them complained about the sound generated by the strange train causing noise and disturbance. Since it was very dirty and looked and looked dangerous. They say that it will inevitably lead to disaster, with respect to it can not be controlled. He can only run straight up the hill and jump over cliffs. They advised Henry Ford's order dismissed the job alone. But the "inventor" it said, "This train should run and run", but it has to be repaired, they said. Ford replied spontaneously "Nowadays I do not have the funds and do not have connections that can help me. All I think about now is how to create an "automobile". For years Henry thought, how it can enhance the results of his work. That is until he was able to demonstrate to the world that he has improved a great and strong capital, the result of the ideas originally considered crazy. When Henry Ford died in 1947, he reached the age of 83 years. Few people can understand it, but millions of people know that the chariot has been around the world.