Paper entitled Infinite Triangle and Hexagonal Lattice Networks of identical resisto. formula even counter barrier between two point series resistors were his own discovery of the "George Saa Formula". Achievement of 19-year-old boy was amazing. The formula discovery won First Step to Nobel Prize in Physic that it outperformed hundreds of papers from 73 countries were entered into the judges' table. The jury consists of 30 winners of the physics of the 25 countries it only takes three days to decide 17-year-old was carried off the gold Jayapura. 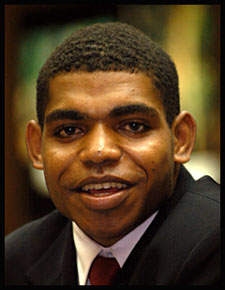 Oge was born from a simple family. His father, Silas Saa, is the Head of Forestry Teminabuhan, Sorong. Oge farmers prefer to call him rather than employees. Therefore, to meet the needs of daily life, Silas, assisted by his wife, Nelce Wofam, and their five children, must cultivate the fields, plant the tubers. Fifth son Silas inherited keenceran brain. Silas is a graduate of Upper Secondary School of Forestry in 1969, a high level of education for Papuans at the time.

Apulena Saa, eldest daughter of Silas, following in the footsteps of his father. He is a graduate of Bachelor of Forestry university. Saa Frankie Albert, the second son, is currently taking Master of Management Program at university. Yopi Saa, the third son, is a medical student Christian University of Indonesia, Jakarta. Saa Augustine, the fourth son, Faculty of Forestry, State University of Papua, Manokwari. While the Youngest, Oge, won gold on the international stage. "All children are not spoiled mama with money, because we have no money," said mama Nelce after accompanying his son received an award from the Department of Forestry, Tuesday (06/22/2004), in the Ministry of Forestry, Jakarta.

He recalled, due to lack of family economy, Oge frequently absent when the elementary to junior high school. Distance from home to school about 10 miles. Oge had to take a "taxi" (public transportation) at a cost of Rp 1,500 each way. That means Rp 3,000 round-trip. "I can not snack. To ride "taxi" just mommy often do not have the money. If you want to eat Oge had to go home, "he said.

For Oge achievement is not necessarily because of the money. The young man known as the playmaker on the basketball court this is a thirst for learning. There is always a way for people who are hungry like Oge. His achievements in the field of physics not only because he is fond of science, to some young people this complex.

"I was interested in physics since junior high. Nothing specifically why I like physics because basically I like to learn only. Forget it says physics, I like to learn everything, "he said. "All subjects in school I liked except PPKN (Pancasilan Education and Citizenship). The lesson was boring and too many notes. I like the chemistry, history, geography, mathematics, especially the Indonesian language. I have always been good value Indonesian, "he added.

Septinus George Saa
After elementary and junior high school truant often colored, Oge received at SMU 3 Buper Jayapura. It is a government-owned flagship schools that ensure all students' needs, ranging from uniforms, pocket money, up to the hostel. Intellectual thirst like finding an oasis here. He began to internet. From this virtual universe he gets all kinds of theories, findings, and results of research experts world physics.

Brain brilliance of black pearls from eastern Indonesia is starting to shine when he won the race in 2001 Chemistry Olympiad regional level. Because of his achievements, he was awarded a scholarship to the Jakarta Provincial Government of Papua. However, his mother forbids her youngest son went to the capital city. Achievement seems to need a bit of mischief and desperation. Assisted by his brother, Frangky, Oge depart quietly. He had told his intention to mommy dearest shortly before boarding the plane. His mother cried for two weeks to realize his son to leave the land of Papua.

Oge later proved that his departure is not something that is hopeless. Mama sad tears turned into tears emotion when November 2003 she was ranked eighth out of 60 participants quantum math contest in India. His achievements culminated this year with a gold clasp physics research. His mother had never cried again. "I want to be a scientist. Actually science to make life easier. Science and technology that make human life comfortable. I hope that I am a scientist, I can make human life more comfortable, "he said.

In Jakarta, he trained specially by Mr. Physics Indonesia, Professor John Surya. Early November 2006 he presented the results of his research at the physical scientists in Poland. He must prove that his research on net count resistor that is an original idea. After that, he will get the opportunity to learn research at the Polish Academy of Science in Poland for a month under the guidance of physicists topnotch. After receiving the award, George was given a lot of facilities. Then education minister, Malik Fajar, asks George to choose any college in Indonesia without a test. College campus where he was also required to provide learning facilities. George was confused to choose the campus before envoys Executive Director of Freedom Institute Rizal Mallarangeng visit him. '' I asked to see Mr. Bakrie,'' said the man was born 22 September 1986.

Freedom Institute offered George studied abroad. Selecting any country would be granted. Want in the Americas, Europe, Africa and even once, it's up to George. Scholarships are not only tuition, but also the cost of living allowance as well. Men's basketball was confused hobbyist select countries. Rizal Mallarangeng suggested that he chose USA. Therefore, the leadership of Barack Obama is good for learning and research. George then sign up to the aerospace engineering department at the Florida Institute of Technology. Campus on the east coast of America in Brevard County. The campus is adjacent to the Kennedy Space Center and the shuttle launch NASA (National Aeronautics and Space Administration).

Majoring in aerospace engineering aerospace engineering alias, George learned all about the plane, the plane flying in the sky or space. He also studied the supersulit in aerospace universe, namely rocket science. '' Because of the difficulty, the Americans used to say, you do not need rocket science to figure it out,'' he said, then chuckled. Among the 200-student's contemporaries, only 40 passed. George learn all about airplanes. Starting aircraft structures, aerodynamics, power lifting, weight efficiency of the technology to manufacture iron bird.

George Saa
Any particular reason he likes airplanes. In addition to admiring the third president of Indonesia is BJ Habibie, who devoted the plane, the stocky man originally wanted to be a pilot. However, because both eyes minus 3.25, he must shift his dream. '' If you can not fly a plane, I should be able to make the plane. At least, understand the technology aircraft,'' he said. The first year in the United States is very difficult for George. Because, he is not fluent in English. Once, he held an hour at the immigration. '' I just sit and be quiet for an hour because not speak English,'' he said.

Therefore, the first year, George indirect lecture. She studied English language school English Language Service in Cleveland, the state of Ohio, USA. For a year he was speeding to learn the language. From 08.00 until 17.00 hours, he ate English language materials. '' I learned more grammar and vocabulary,'' explained the youngest partner Silas Saa and Nelly Wafom it. George graduated at the end of 2009. Now, he works in an international company engaged in oil and gas while help out in the organization that gave him a scholarship, Freedom Institute. '' Three weeks I've been in Jakarta. Later into the sea again,'' he said.