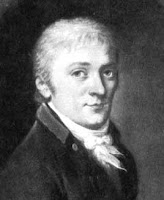 Johann Carl Friedrich Gauss (also spelled Gauss) (born in Braunschweig, 30 April 1777 - died in Göttingen, February 23, 1855 at the age of 77 years) is a mathematician, astronomer, and a German physicist who provide diverse contributions, and he is seen as one of the greatest mathematicians all-time in addition to Archimedes and Isaac Newton. Born in Braunschweig, Germany, when he was barely 3 years old, he has been able to correct payroll errors bricklayer father.

According to a story, at age 10, he made his teacher was amazed by giving the formula for calculating the amount of a series of arithmetic calculations such as the series 1 +2 +3 + ... +100. Although the story is almost entirely true, given problem teachers are actually more difficult than that. As one of the greatest mathematicians of all time, in addition to Archimedes and Isaac Newton, Gauss did her research at an astronomical observatory in Göttingen, a small town in the heart of Germany. Which immediately created a mathematical tradition which makes Gottingen and the university at the center of the world of mathematics.

Gauss gave a varied diverse contributions to the field of mathematics. Areas of analysis and geometry contains many thoughts Gauss donations, non-Euclidean geometry idea he was working on in 1797. In 1799 donated his doctoral thesis on the Fundamental Theorem of Algebra. In 1800 successfully created the least squares method. And in 1801 managed to answer the question with a 2000 year-old made 17 sided polygon using a ruler and compass. In this year also published Disquisitiones Arithmeticae, a classic work on number theory the most influential of all time. Gauss spent most of his life in Gottingen and died there as well.

Gauss is that scientists in different fields: mathematics, physics, and astronomy. Areas of analysis and geometry contributes a lot of thought donations Gauss in mathematics. Calculus (including limit) is one of the areas of analysis that also caught his attention.