Please Share this article is useful !
Chairul born in Jakarta, June 16, 1962, born in Jakarta in the family is enough. His father A.G. Tanjung is old order era journalist who publishes a small circulation newspapers. Chairul are in a family with six other siblings. When arriving in the New Order era, his father's business was forced to close due to politically opposed to the rulers at that time. The situation is forcing parents to sell the house and move to stay in the room inn which sempi

He is is a businessman from Indonesia. His name is widely known as a successful businessman with the company he leads, the Group, Chairul has started doing business when she attended from the Department of Dentistry, University of Indonesia. Had ups and downs, he eventually built a successful business. His conglomerate, the Group becomes a business enterprise in charge of some other companies such as Trans TV and Mega Bank 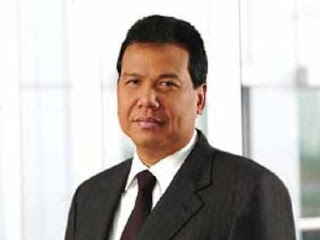 After finishing school in high school Boedi Oetomo in 1981, entered Chairul Department of Dentistry, University of Indonesia (graduated 1987). When this college he entered the business world began. And in college, he was honored as National Model Student 1984-1985. In order to meet the needs of college, he starts a business from scratch that is selling textbooks stencils, shirts, and others on campus. He also opened a photocopy on campus. Chairul also founded a medical supply store and laboratory numbers Senen Raya, Central Jakarta, but it broke.

After college, Chairul been established PT Pariarti Shindutama with three colleagues in 1987. Capitalized initial USD 150 million from Exim Bank, they produce children's shoes for export. Luck sided with him, because the company immediately received orders of 160 thousand pairs of shoes from Italy. However, due to differences in vision of expansion, Chairul choose separation and establish their own business.

His skills as an entrepreneur to build a network and make business grow. Directing business to a conglomerate, Chairul reposition itself into three core businesses: financial, property, and multimedia. In the financial sector, he took over what is now Bank Karman Bank Mega. He named the company with the Group. The company has a core conglomeration Holdindo as father holding company, which is in charge of several sub-holding, namely the Global Investindo (business finance), The Core Investindo (media and investment) and the Core Propertindo (property).

Under the group, Chairul has a number of companies in the financial sector include General Insurance Mega Life Insurance Mega Life, The Multi Finance, Bank Mega, Mega Capital Indonesia, Bank Syariah Mega and Mega Finance. While in

property and investments, the company in charge of the London Propertindo Propertindo the Bali, Batam Indah Investindo, Mega Indah Propertindo. And in the field of broadcasting and multimedia, The Group has a Trans TV, Trans 7, Mahagagaya Prime, Trans Fashion, Lifestyle Trans and Trans Studio. Specialized in property business, the Group has Bandung Supermall. 3 acres Mal spent over 99 billion dollars. The Group launched Bandung Supermall as the Central Business District in 1999. While in the field of investment, In early 2010, the Group through its subsidiary, Trans Corp. bought a majority stake in Carrefour, which is some 40 percent. Regarding the purchase of Carrefour, the MoU (memorandum of understanding) purchase of Carrefour's shares was signed on March 12, 2010 in France.

Chairul said that in building a business, develop a network (network) is important. Having a partner (partner) is well needed. Building a relationship was not only to companies that are reputable, but also on an unknown though. For Chairul, a good friend will help evolve business processes undertaken. When business conditions are not good (read: quiet subscribers), the network can rely on. For Chairul, even friends with any official letter carriers is important. In terms of investment, Chairul own idealism that local companies can be a company that can synergize with multinational companies. He does not shut himself to working with multinationals from abroad. For him, this is not an attempt to sell the country. However, this effort is a national company Indonesia can stand alone, and so the host country itself.

According to Chairul, capital is important in building and growing a business. For him, the willingness and hard work should be owned by someone who wants to succeed in business. But getting a reliable partner is everything. For him, as well as build trust by building integrity. This is where the importance of networking (networking) in running the business.

In business, Chairul said that the younger generation businesses should be patient, and willing to venture up the stairs one at a time. According to him, building a business is not like turning the palm of the hand. It takes a patience, and never give up. Do not let the many who take the instantaneous (instant), because in the business world patience is one key to steal the heart of the market. Build integrity is important for Chairul. It is human as he tried, someone wanted to get the result. Not all results can be received directly.