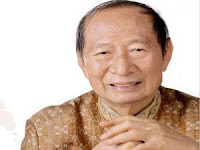 With the full name of Dr. Ir. Ciputra was born in the small town of Parigi, Central Sulawesi on August 24, 1931 with the name Tjie Tjin Hoan, he was the third child of the couple Tjie Poe and Lie Sim Eng Nio is also a simple family background. When he was 12 he lost his father, who died in custody due to the Japanese occupation forces considered false accusations Dutch spy. Bitterness childhood has led to the determination and the important decisions that have aspirations to school in Java for a better future, free from poverty and destitution.

Finally Dr. Ir. Ciputra little back to school even though late. He was late because we are still in a state of war with the Dutch and the Japanese army. He entered grade 3 elementary school in the village Bumbulan though he was already 12 years old and almost 4 years late. When he was 16 years old graduated from junior high school and then went on in Gorontalo and high school level in Manado after it entered the ITB in Bandung majoring in architecture. Late but not that hampered not ..?

Dr adolescence education overall. Ir. Ciputra is a combination of academic education as well as non-academic, in the classroom and outside the classroom. This is what can be called the school of life that makes a person grow into an independent and intact. It is therefore not surprising that today he believes that a good education is the education of the whole person and build some character is to build morale, encourage creativity and independent characters educating her students.

Ciputra pioneered a business trip since I was a student of architecture Bandung Institute of Technology. Together with Ismail Sofyan and Budi Brasali, a fellow student, founded around 1957 PT Ciputra Power Notices. Architect firm owned by three students, has been awarded a contract for the work was tolerable, compared to other similar companies. Projects that they handle include a bank buildings in Banda Aceh. Ciputra of 1960 graduated from ITB. Jakarta ... We need to Jakarta, for there is a lot of work, he told Islamil Sofyan and Budi Brasali. The decision is a milestone that determines the way of life Ciputra and his colleagues. With the flag of PT Perentjaja Djaja IPD, which shot Ciputra prestigious project is the construction of shopping centers in the region senen. In many ways, Ciputra is trying to meet with the Governor of Jakarta at the time, Dr. R. Soemarno, to offer his proposal. Tit for tat. Meeting with Soemarno then followed up by establishing PT Jaya Development, having first convened by President Soekarno.

After the shopping center Monday, Ciputra monumental project is next to Jaya Ancol Dreamland and Bintaro Jay. Through a company 40% owned by the government of Jakarta is Ciputra showed his class as a reliable and professional entrepreuneur in mobilizing existing resources into the power of big business. Jaya Group which was established in 1961 with capital of Rp. 10 million, now has total assets of approximately Rp. 5 trillion. With the support of lobbying capabilities, Ciputra gradually also developed a network of companies outside the Jaya, the Metropolitan Group, Pondok Indah Group, Group Bumi Serpong Damai, and the last is the Ciputra Group. The total number of subsidiaries of the group's fifth course above a hundred, as a subsidiary of the Group Jaya only 47 and a subsidiary of the Metropolitan Group reached 54. In this regard, Ciputra jokingly said: If your child of ten, we can still remember the name of each. But if more than that, even numbers were difficult to remember anymore.

Facility is the third element of the 10 factors that determine customer satisfaction. Consumers should be satisfied with the provision of public facilities and social amenities more. But the facility should not be built at the same early stage of development. If the facility is built more immediate, direct selling price will be high. It will not provide benefits to the first buyer, as well as a major risk for the developer. Ciputra has shares in the five business groups (Group Jaya, Metropolitan Group, Group Pondoh Beautiful, Group Bumi Serpong Damai, and Ciputra Group). Of five business groups, the Ciputra not cover that in fact he was the first to put his loyalty to Jaya. First, because it is almost identical to Jaya. This is where business networking begins properties. Since the company was formed in 1961, Ciputra sits in the ranks of directors for 35 years: the first 3 years as director and 32 years as president, until he resigned in 1996 and became commissioner last active. Second, is the fact that after the government of Jakarta, Ciputra is the largest shareholder in Jaya.

Since a few years ago, stating Fifth Ciputra group effort - especially for its property projects - into a marketing alliance. The alliance was originally given the name of the Pioneers, but has now been changed to the Developer. "The name of the Pioneers seem arrogant and oriented to their own interests," said Ciputra about the name change.