Please Share this article is useful !
Fashion Designer Giorgio Armani was born on July 11, 1934, in Piacenza, about 50 miles south of Milan, in the region of Emilia-Romagna, Italy. He attended medical school for two years, dabbled in photography, fulfilled his military obligations in 1957, then worked in a prestigious department store, La Rinascente, as a window dresser. He joined Nino Cerruti as a designer from 1961 to 1970.

Armani began free-lance design business in 1970 with the encouragement of his friend Sergio Galeotti, and established its own menswear label in 1974. He gradually adapted his designs for women and added women's wear line in 1975, in partnership with the Galeotti (who died in 1985). Sister Rosanna Armani teamed up with Armani as head of corporate communications activities. 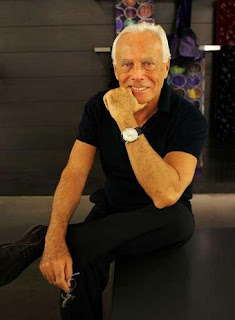 Armani, whose relaxed designs for women are inspired by men's wear, also uses men's wear fabrics in his sophisticated, unstructured jackets and suits for women. With this approach, Armani has set a new standard of understated elegance: easy-fit garments for women, precisely cut and beautifully tailored.

He is known as a workaholic, which sometimes can be rude and arrogant. Dislike of fellow Italian designer Gianni Versace and Valentino recently had pressed for the benefit of the international press. In May, 1996, Armani was convicted of corruption in Italy, among fellow designers like Ferre. Armani has a house in Broni, Forte dei Marmi, and Pantelleria (Italy), and in St Tropez (French Riviera).

Distribution
Armani largest export market for the United States, where the Armani label sold at 12,000 retail outlets. In 1995, Armani has brought 36 exclusive outlets Giorgio Armani and Borgonuovo-21 line. Emporio Armani outlets numbered 119 in 1995, to 54 in Italy and 22 in Japan. This figure rose to 121 stores in 1997 and is planned to be increased by 8 in the near future. A / X Armani Exchange had only sold in the United States. In 1994, A / X stores were taken over by Club 21 USA, Inc., but continuesly struggled to compete with its competitors to lower prices as Banana Republic. Today, Armani intends to open more A / X-outlet, as well as introducing them to customers in Asia for the first time.

Production / Licenses
The main Armani lines produced by the biggest Italian designer clothing, Gruppo GFT. Armani clothing account for around 30% of sales and hence GFT GFT most important license. In 1994, Armani GFT try to take over with the help of American investors, presumably to help Armani's sports affiliation, Simint, who have gotten into financial trouble at the time. Now Simint recovered, after cutting its staff, changing the structure of the distribution, and concentrate production in Italy. Economic cycles can be achieved, resulting in the 1995/1996 sales of 255 billion Lira ($ 160 million) and turn loses 24 billion Lira ($ 16 million) in the previous year with a net profit of 5.4 billion Lira ($ 3.5 million). Sales for fiscal year 1996/1997 is expected to be 180 billion Lira ($ 117 million). Armani is said to be interested in expanding their own production capabilities. To that end, both Armani expected shift production to the main lines from GFT Simint or Antinea or she will take over the shares of GFT, which is expected to make such an offer to keep their most profitable clients.

In late 1996, Armani announced that from now on clothing under the label Armani Jeans-going attention to strict environmental standards, introducing a range of clothing items that will be made of Hamp. Between Armani accessories, eye-wear collection constantly appear to enjoy success. Armani sunglasses manufactured since 1988 by Italian designer eye-wear specialist Luxottica and exclusively sold in specialty shops and boutiques wear Armani.

Distribution
Armani wants to expand its number of stores significantly. Most obviously, he opened two huge flagship stores in New York City on Madision Avenue, one for the top line and one for Emporio Armani. Armani seems to pursue the creation of a lifestyle brand "Armani". This movement refelcted in efforts to offer a wide range of products under the Armani-label. As in 1996 introduced a winter sports line Neve Armani, Armani Golf sportswear line (both produced earlier by Skinea and now by Simint), and the introduction of custom-made wedding dress, as part of Borgonuovo-21 line. Also, Classico, a new luxurious and expensive line for men and women will be introduced. Here, Armani wants to offer a modern interpretation of classic design. In addition, Armani sells a wide range of home accessories under the label Emporio Armani. In 1997, the first Armani Jeans store in Rome, Italy also included an Armani bookstore, selling publications on various subjects of art, such as fashion and photography.

The company licensed the name for perfume, watches, and accessories, but apparel still accounts for more than half the revenue. Armani's retail empire includes more than 35 countries and includes nearly 280 stores. Armani has Simint, Italy Armani jeans license holders, and move the production lines in the house. Armani has plans to develop a series of luxury hotels and resorts. Despite persistent flotation flirtations, the designer retain ownership of the company.