Please Share this article is useful !
Mendel was born in 1822 in the town of Heinzendorf in the sovereign kingdom of Austria who now enters the territory Cekosiowakia. In 1843 he entered the Augustinian monastery in the town of Brunn, Austria (now called Brno, Czech). He became a priest in 1847.

In 1850 he obtained a diploma teachers to take the exam, but failed and the worst figures in biology! Even so, the priest at the monastery sent Mendel to the University of Vienna, from the years 1851-1853 he studied mathematics and other sciences. Mendel never bagged diploma formal teacher, but from the years 1854-1868 he was a science teacher at the school reserves the modern city of Brunn.

Meanwhile, in 1856 he began to exhibit a famous experiences in the field of plant breeding. By the year 1865 he had discovered the law of the famous offspring and present his paper at the front of the bevy of natural history enthusiasts Brunn city. 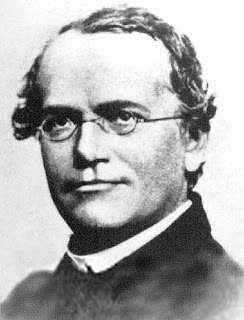 In 1866 the results of his investigations were published by a magazine owned by the society Transactions under the heading "Experiments with Plant Hybrids." Paper work both published by the magazine as well three years later. Although the magazine was not a great magazine, but it is widely available in various large library. In addition Mendel sent a copy to Karl Nageli, a respected figure in the field of genetics. Nageli read a copy of it and send a reply to the Mendel but he does not understand what is very important in a copy of Mendel's paper. After Mendel's paper work was generally ignored and almost forgotten for almost thirty years.

Mendel was promoted in 1866 was appointed the head priest at the monastery. Busyness routine administration made it out due to continue his investigations in the field of plants. When he died in 1884 at the age of sixty-one, almost forgotten brilliance investigation and he did not get any recognition for the investigation.

Toil newly rediscovered Mendel in 1900 by three scientists from three different nations: Hugo de Vries from the Netherlands, Carl Correns of Germany and Erich von Tschermak of Austria. They work independently when find articles Mendel. Each of them has had its own experience in the field of botany. Each individually discover Mendel's laws. And each (before publishing) carefully studied the work of Mendel and each also explained that the investigation confirms what Mendel. A strange coincidence triangle! More than that, in that year, William Bateson, a British scientist, Mendel also found the original paperwork and immediately forward to the world of science. At the end of the year it can Mendel applause and appreciation for such great works he did during his lifetime.

The evidence is about the descendants who have met Mendel? First, Mendel knew that in all living organisms are "basic unit" which is now called the gene that specifically passed down from parents to their children. In the world of plants that Mendel investigated, by personal characteristics, such as seed color, leaf shape, determined by the partner gene.

A plant inherited one gene of each pair from each "parent" him. Mendel found that when the gene inherited two distinct one particular quality (eg, a gene for green seeds and another gene for yellow seed) will show itself in that particular plant. However, gene, characterized by weak not indestructible and may be passed on to the offspring plants. Mendel realized, each cell activity or gamete (sperm or eggs similar to those in humans) contains only one gene for one pair. She noted, is entirely a coincidence when the gene of a pair occurs in a gamete and passed on to many generations.

Mendel's laws, though it made little changes, remains the starting point of modern genetics. How Mendel as an amateur was able to find principles that are so important to set aside so many famous professional biologists that existed before? Fortunately, he chose to field investigation of plant species traits are determined by a set of distinctive gene.

If only the principal characteristics that investigates each been determined by various devices gene, the investigation will face tremendous difficulties. However, luck is not going to help Mendel if only he did not have the devastating nature of the precision and patience of a tempter, and also will not help him if he does not realize that the need to make a statistical analysis of the observations. Because of the above examples, generally may not be suspected of any kind of quality which offspring will inherit. Only through a large number of experiments (Mendel had record results lebili than 21,000 plants!), And through the analysis of the results, Mendel was able to draw conclusions on its laws.

Clearly, the law of heredity is an important additive for human knowledge, and our knowledge of genetics may be more practicable in the future than ever before. There is also a factor that should not be ignored if we decide where Mendel should be placed in order of the list this book. Since its discovery as underrated in his life, and the conclusions are found by scientists who came later, the investigation Mendel considered independent. If we force this reason, one can conclude that Mendel may be excluded entirely from the list, like Leif Ericson, Aristarchus, Ignaz Semmelweiss has been set aside to provide a place for Columbus, Copernicus, and Joseph Lister.

However, there is a difference between Mendel with other cases. Mendel job only briefly forgotten, and so be retrieved, immediately soar. Furthermore, de Vries, Correns, and Tschermak, although they rediscovered its principles independently, yet he read Mendel's work and cites the results. Finally, one can not say that Mendel's work was influential despite de Vries, Correns and Tschermak had never lived.

The articles Mendel already widespread history-history (by WO Focke) about the problem descent. Posts that sooner or later have can certainly be found also by serious students in the field. Also worth noting, none of the three scientists who claim that they are the inventors of the science of genetics. Also, in general, the world of science is called "Mendel's Law." Mendel's discovery seems to be compared to the discovery of Harvey, in terms of both the original and the importance of the circulation of blood, and he was placed in a reasonable order.