Please Share this article is useful !
Gustav Robert Kirchhoff (March 12, 1824 - October 17, 1887), was a German physicist who contributed to the understanding of the basic concepts of the theory of electrical circuits, spectroscopy, and the emission of black-body radiation generated by heated objects. He coined the term radiation "black body" in 1862. There are three different concepts of physics, later named after him, "Kirchhoff's laws", each in electrical circuit theory, thermodynamics, and spectroscopy.

Gustav Kirchhoff was born in Königsberg, East Prussia (now Kaliningrad, Russia), the son of Friedrich Kirchhoff, a lawyer, and Johanna Henriette Wittke. He graduated from Albertus University of Königsberg (now Kaliningrad) in 1847 and married Clara Richelot, the daughter of his mathematics professor, Friedrich Richelot. In the same year, they moved to Berlin, where he received the title of professor in Breslau (now Wroclaw). 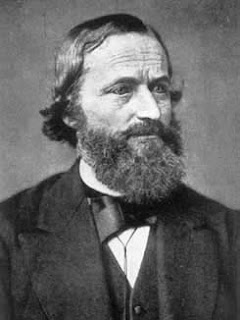 Kirchhoff formulated the law of the circuit, which is now used in electrical engineering, in 1845, when he was still a student. He proposed the law of thermal radiation in 1859, and proved in 1861. In Breslau, he collaborated in spectroscopic studies with Robert Bunsen. He is the co-discoverer of cesium and rubidium in 1861 while studying the chemical composition of the Sun via the spectrum.

In 1862 he was awarded the Rumford Medal for his research on the lines of the solar spectrum, and the reversal of bright lines in the spectrum of artificial light. He played a major role in the field of spectroscopy by formulating three laws that describe the composition of the optical spectrum incandescent objects, based on the discovery of David Alter and Anders Jonas Angstrom (see also: spectrum analysis)