Biography of I Gusti Ngurah Rai


Please Share this article is useful !
Posthumous military Colonel I Gusti Ngurah Rai was born in the village of Carangsari, Evening, Badung regency, Bali, on January 30, 1917, his father named I Gusti Ngurah Trench who is a foreign (district-level positions).

After completing his education at Denpasar and MULO in Malang, in 1936 he continued his education at the School of Military Cadres in Gianyar Bali. Furthermore enrolled in Voor Reserve Corps Opleiding Officieren (CORO), Magelang.

During the Japanese occupation, Ngurah Rai worked as an intelligence allies in Bali and Lombok. After independence the government of Indonesia Indonesia I Gusti Ngurah Rai forming the Sunda TKR Kecildan he became commanding officer with the rank of Colonel Letnal. Ngurah Rai then go to Yogyakarta to consolidate and get directions from the leadership of TKR. 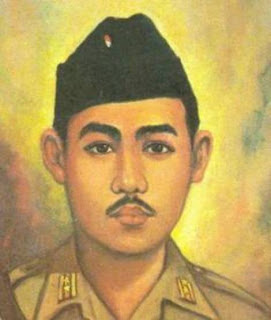 Detailed struggle I Gusti Ngurah Rai and CW regiment can be seen in several books, such as "guerrilla Together Ngurah Rai" (Denpasar: BP, 1994) testimony of one of his staff MBO DPRI SK, I Gusti Bagus Meraku Tirtayasa winning "Grace Harkitnas Journalism 1993", book "People Around Mr. Rai: The story of the Friends of the National Hero Brigadier General (posthumously) I Gusti Ngurah Rai" (Denpasar: Upada Literature, 1995), or the book "Puputan Margarana Date 20 November 1946" compiled by Wayan Djegug A Giri (Denpasar: YKP, 1990).

The Indonesian government confers Mahaputra star and promoted to Brigadier General (posthumously). His name was later immortalized in the name of the airport in Bali, Ngurah Rai.