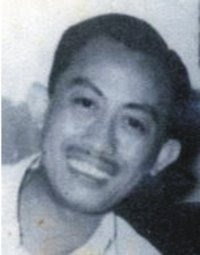 Ismail Marzuki born in Kwitang, Senen, Batavia, May 11, 1914, Ismail Marzuki, better known by the call Maing is one of the legendary music maestro in Indonesia, it has artistic talent is difficult to find peerless. His figure was awesome. He is best known as the young noble personality and quite smart boy. Ismail since young happy look dapper. His clothes are ironed smooth, shiny shoes, and he was happy to tie.

Blood flowed from his father the art of Ismail Marzuki, who was an employee at the company Ford Reparatieer IOP. Pak Marzuki known to love to play the harp and sang expertly poems are breathed Islam. So it is not strange that after Ismail since childhood he was interested in the songs. Parents Ismail Marzuki including community groups Betawa forward-thinking intellect. Ismail Marzuki Ma'ing called by name, since the boy is already showing great interest in the art of music. His father was able to earn enough to buy that record and gramophone are popularly called "talking machine" by the Betawi people past.

Ma'ing schooled him to a Christian school his Idenburg, Menteng. His nickname at school was Benjamin. But then her father will be worried that kebelanda-belandaan, then transferred to the Madrasah Ma'ing Unwanul-Falah in Kwitang. Growing up, he bought his father a simple musical instrument. Even Ma'ing each grade are rewarded harmonica, mandolin, and guitar. After graduation, Ma'ing MULO school and formed the band itself. There he played a musical instrument banjo and likes to play songs Dixieland style and western songs that is loved at the time.

After high MULO, Ma'ing work Socony Service Station as a cashier with a salary of 30 guilders a month, so he could save money to buy a violin. However, a job as a cashier felt less fit for him, so he moved jobs with no fixed salary as Verkoper (seller) LPs Columbia and Polydor production based in Noordwijk Road (now Jalan Ir. H. Juanda) Jakarta. His income depends on the number of records he sold. Apparently, the job is only as a stepping stone to the next career level in the field of music.

While working as a salesman LPs, Ma'ing much acquainted with artist performances, film, music and singers, among them Zahirdin, Yahya, Kartolo, and Roekiah (parents Rachmat Kartolo). In 1936, the orchestra association Ma'ing entered Lief Java as a guitar player, saxophone and harmonium pump.

In 1934, Holland formed Nederlands Indische Radio Omroep Maatshappij (Nirom) and Lief Java orchestra had the opportunity to broadcast music filled event. But Ma'ing began to distance themselves from Western songs, and then create their own songs including "Ali Baba Rumba", "Ohle le in Kotaraja", and "Ya Aini". His songs are then recorded into the record in Singapore. Orchestra music had an opening song that they called Sweet Jaya Islander. The song without notice or further ado made radio broadcasts Nirom opening song, so the band Ma'ing protested, but their protests were ignored by the director Nirom.

In the period 1936-1937, Ma'ing began studying various types of traditional songs and Western songs. It is involved in some of his creations in the period, "My Hula-Hula Girl". Later his songs "Roses from Mayangan" and "Sitting Termenung" used as the theme song for the movie "Light of the Moon". Beginning of World War II (1940) began to influence life in the Dutch East Indies (Indonesia). Nirom Radio began broadcasting music event limit, so some people in Indonesia Betawi began making his own radio as Vereneging Oostersche Radio Omroep (Voro) located at Karamat Kingdom. Transmitter antennae of their own making bamboo rods.

Every night of the week Lief Java orchestra held a special broadcast with singers such as Annie Landouw. Ma'ing even so the music player at the same time filling the comedy under the pseudonym "Uncle resignation" aided by "Empty Bottle" aka Memet. Because Ma'ing very fond of playing different kinds of musical instruments, one time he was rewarded with a saxophone by his friend who was suffering from lung disease. After the doctor explained to Ma'ing and brass are destroyed. But, from that moment of lung disease interfere Ma'ing.

When Ma'ing commitments organization formed Eastern Radio (PRK), the Netherlands asking him to lead the orchestra studio located in eastern Bandung (Tegal-Lega). Orkesnya brought Western songs. In this period he studied many forms of Western songs, which he composed and then translated into Indonesian tones. A Russian song creation R. Karsov Sundanese translated into a "Panon Hideung". A Dutch but his songs have Eastern intonations that song "Als de Orchideen bloeien". The song was later recorded by the record company His Master's Voice (HMV). Later this song again translated into the Indonesian language under the title "When Starting Flowering Orchids".

In 1940, married to singer kroncong Ma'ing Bulis bint EMPI. In March 1942, when the Japanese occupied the whole of Indonesia, Radio Nirom dissolved to be replaced by the name Kanri Hoso Kyoku. CRP also dissolved Japan, and the orchestra Lief Java Kireina renamed Java. When it began to enter the period Ma'ing creating patriotic songs. At first verse the song is still shaped like a gentle poetic "If Melati Blossom sprig", "Flower Rampai of Bali" and forms of light entertainment, even somewhat addresses the seriosa.

In the period 1943-1944, Ma'ing creating songs that start leads to patriotic songs, including "Flirt Coconut Island," "Whisper Motherland", "gallant officer", and "Indonesia Land Heritage". The head of the Japanese propaganda, Sumitsu, suspecting the songs are then reported to the Kenpetai (Japanese military police), so Ma'ing had been threatened by Kenpetai. However, this Betawi son was undaunted. In fact, in 1945 was born the song "Goodbye Young Heroes".

After World War II, the creation Ma'ing continues to flow, such as "Deep in the Heart's Do not" (1947) and "Halo-halo Bandung" (1948). When it Ma'ing and his wife moved to London because the house in Jakarta meraka serempet mortar rounds hit. While in southern Bandung, Jakarta Ma'ing father died. Ma'ing late received the news. When he arrived in Jakarta, his father had been buried a few days. Flowers that adorn the tomb of his father and had withered, inspired to create the song "Autumn Flowers".

Songs about the struggle of creation romantic style without compromising the values ​​of fighting spirit among others "to Medan Jaya", "Pair of Eye Ball", "Silk Scarves", "Jasmine in Bekasi Boundary", "Handkerchiefs from South London , "" Welcome to Young Heroes ". Song popular entertainment (condensed) breath love is to the point that given the atmosphere of the story of the struggle for independence. For example, the song lyric "High Mountain Thousand Promises", and "Juwita Night". Songs that are specifically depicts the lives of the fighters kemerekaan, made light of his verse in a popular form, do not use the Indonesian language high are difficult to digest. Consider just the poem "Oh Cpl Jono" and "Sergeant Mayorku". The songs he created in the form of romantic pure light entertainment, although popular tilled but his verse form weighted seriosa. For example, the song "Aryati", "Oh Say Wind. In 1950 he was still writing songs" Irian Samba "and in 1957 the song" Happiness Is "- a song that many observers fishing tandatanya of music.

Until the creation of the song's 100th, Ma'ing still was not satisfied and not happy. In fact, his songs are all 103 had not given the title and the lyrics, until Ma'ing alias great composer Ismail Marzuki Indonesia was close eye forever on May 25, 1058.