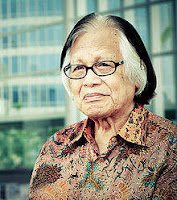 Jakob Oetama born in Borobudur, Magelang, 27 September 1931, he is a journalist and co-founder of the newspaper Kompas. Jakob is the son of a retired teacher in Sleman, Yogyakarta. After graduating high school (seminary) in Yogyakarta, he taught at the junior Mardiyuwana (Cipanas, West Java) and junior Van Lith Jakarta. In 1955, he became editor of the weekly Sower in Jakarta.

To live life as a journalist, Jakob fraternize with journalists like Adinegoro, Parada Harahap Thursday Pari, Mochtar Lubis, and Rosihan Anwar. "In questions of journalism, Ojong was my teacher, in addition to Mochtar Lubis and Rosihan Anwar," he said. In the eyes of Jakob, Ojong strong in the humanities and strong in principle the values ​​of progress. Mochtar Lubis courageous figure and uphold the principles, Rosihan Anwar was strong in humanities issues. Essence Magazine is then reinforced by friends Jakob-Ojong of Yogyakarta as Swantoro and J Adisubrata. Following Indra Gunawan and Kurnia Munaba.

Together PK Ojong, Jacob Oetama in 1963 founded the magazine is oriented intisari.majalah reader'sdigest magazine from America. The next success story continued with the essence of establishing a daily newspaper which was named KOMPAS.hal this happened in 1965, which at that time was in sibukan Indonesia by threats PKI rebellion.

Since the early 1960s, and Jakob Auwjong they both be good stewards of the Association of Indonesian Catholic scholars. Was also equally be a teacher and had a great interest in history. Like the Star Weekly, Essence involving many specialists. Among economists Prof. Widjojo Nitisastro, author of the famous economic problems Drs. Sanjoto Sastromihardjo, or young historian Nugroho Notosusanto. Currently, the association's broad Auwjong. He is good friends with Goenawan, Arief Budiman, Soe Hok Gie, and Machfudi Mangkudilaga. Digest published August 17, 1963. Like the Star Weekly, she was black and white and bare, skinless face. The size is 14 X 17.5 cm, with 128 pages thick. Logo "essence" of his namesake with a raised logo rubric Ojong in the Star Weekly. Printed first edition sold 10,000 copies apparently.

Help each other, the same office, even journalists were concurrently. After some people herald the Foundation board met Bung Karno, he suggested the name "Compass". Board of trustees - I.J. Kasimo (Chairman), Frans Seda (Vice Chairman), F.C. Palaunsuka (I I), Jakob Oetama (Writer II), and Auwjong Peng Koen (treasurer) - agrees. They also agreed on the nature of the independent daily, digging their own news sources, and actively compensate for the influence of communism, by sticking to the truth, accuracy appropriate professional and moral preaching. As per the nature Auwjong always plan everything carefully, prepared Compass mature birth possible.

From the development of this compass, then stood Reuters business group. seaside is the name used to label the members buku.hingga store business is now under the control of the compass seaside Oetama Jacob has spread its wings in the field trending usaha.termasuk them manage the hotel business and could take part in the world of television journalism.

Under the leadership of Jacob Oetama metamorphosis has occurred press release from the sectarian become mass media reflects the inclusive democracy. Work experience in the field of journalism begins Sower magazine editor, Digest monthly magazine Chief Editor, Chief Editor Daily Compass, the publisher / editor Compass and Compass Group President-Scholastic. A number of papers Oetama Jacob, among others, the status and function of the Press in the system of Guided Democracy, which is the thesis in Fisipol UGM 1962, the Business and Business Ethics (Compass Book Publishers, 2001), and Re-Thinking about keindonesiaan (Compass Book Publishers, 2002).

Jakob Oetama is the recipient of honorary doctorate to-18-GMU granted after the same degree conferred UGM the Head of State of Brunei Darussalam Sultan Hassanal Bolkiah. Prof Dr promoter Moeljarto Tjokrowinoto in his judgment stated, services and works in the field of journalism Jakob Oetama essentially reflects the service and extraordinary work in the areas of society and culture. He also has a certain influence to the press in Indonesia. In its discretion, assess UGM Jacob Oetama since 1965 has developed insight and nuanced piece of journalism cool, the "typical journalism culture", which is based on journalistic insight particular political philosophy. The culture of journalism that has become a reference for journalism life in Indonesia.