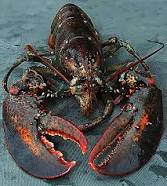 Lobsters are invertebrates, which belong to the Crustacean class of the Phylum Arthropoda. There are two different families of lobsters existing in the United States. They are the American lobster and the spiny lobster. American lobsters are clawed lobsters which are classified under the taxonomic family Nephropidae, or large marine crustaceans. Spiny lobsters are without claws, but with a pair of horns that can be seen above the eyes. You can find five pairs of jointed legs in a lobster. They come in a variety of colors, sizes, and forms. Their sizes range from 1-12 inches.

Abdomen is the tail section of the lobster which is composed of seven segments. Antennae are sensory organs, which functions as a chemoreceptor. Antennules help to perceive distant odors. The external shell of the cephalothorax is called carapace. Cephalothorax, one of the main parts of a lobster, is covered by the carapace. It is made up of the head and the thorax. The larger claws are called as the crusher claws. These are very useful for crushing prey. Ripper or pincher claws are the smaller claws. A lobster has a pair of compound eyes providing sense of sight. The functions of the mandibles and maxillipeds are to grip and shred its food. Pereiopods are two sets of walking legs suitable for burrowing. Central tail fin is called telson and outer pairs of tail fins are known as uropods.

Lobsters live in burrows in the muddy areas at the bottom of the ocean. Smaller ones are called as lobsterettes. Similar to all arthropods, lobsters must molt in order to grow, leaving them vulnerable during this time. Most lobsters are carnivores and feed on clams, carrion, mussels, snails, worms, sea urchin, and other lobsters.

Like the grasshopper, the nervous system of a lobster is very primitive. Approximately 100,000 neurons are present in a lobster. Usually, the color of its blood is grayish. The large blood vessels circulate its blood from the heart which is located behind the stomach. Lobsters take in oxygen from the water through the gills, found in the lobsters' thorax section.