Please Share this article is useful !
Pythagoras was born in the year 570 BC, on the island of Samos, in the Ionia area. Pythagoras (582 BC - 496 BC, Greek: Πυθαγόρας) was a Greek mathematician and philosopher who is best known through teoremanya.Dikenal as the "Father of Numbers", he gave an important contribution to philosophy and religious teaching in the late 6th century BC. The life and teachings are not so clear due to the many legends and stories made about him.

In the Greek tradition, we are told that he traveled widely, including to Egypt. Pythagoras travel to Egypt is one of his attempts to sit, gain knowledge, the priests of Egypt. That said, because of extraordinary intelligence, the priests who visited felt unable to accept Pythagoras as a disciple. However, in the end he was accepted as a pupil by the priests at Thebes. Here he studied a variety of mysteries. In addition, Pythagoras also studied at Caldei priests to study Astronomy, the priests Phoenesia to study Logistics and geometry, to the Magi to learn the mystic rites, and in the encounter with Zarathustra, he studied the theory of resistance.

After wandering in search of knowledge, Pythagoras returned to Samos and continue searching for his philosophy and became a teacher for the children Polycartes, tyrant ruler of Samos. At about the year 530, because it does not agree with the government tyrannos Polycartes, he moved to the city Kroton in southern Italy. In this city, Pythagoras founded a religious congregation which later became known as "The Phytagorean." 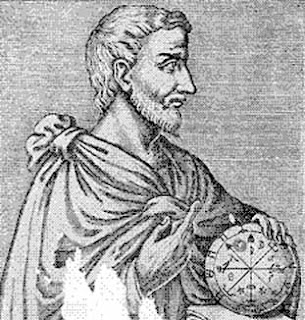 The phytagorean very instrumental in forwarding thinking Pythagoras. Their famous motto is "authos epha, IPSE dixit" (he himself said so) .2 Tribe is organized according to the rules of living together, and each person must stick to it. They consider the philosophy and science as a way of life, means that every person shall be clean, so that the escape of transmigration of souls constantly. Among the followers of Pythagoras later developed two streams. The first is called akusmatikoi (akusma = what you've heard; rules): they heed purification by obeying all the rules carefully. The second is called mathematikoi (mathesis = science): they give priority to science, especially science.

Thought Pythagoras
Pythagoras believed that numbers instead of elements such as air and water are widely believed to be the elements of all things. Figures not elements of nature. Basically the Phytagorean assume that the views Anaximandros about to Apeiron close also with a view Pythagoras. To Apeiron release opposing elements so that they are in balance or fairness (dikhe). Pythagoras expressed the view that harmony occurs due to numbers. When all things are numbers, then this does not mean that everything can be calculated, assessed and measured by numbers in a proportional relationship and regular, but thanks to those numbers everything into a harmonious, balanced. In other words, the order of going through the numbers.

One of the relics of the famous Pythagoras Pythagorean theorem, which states that the square of the hypotenuse of a right triangle is equal to the sum of the squares of the legs (the sides of the elbow). Although the facts in this theorem has been widely known before the birth of Pythagoras, but Pythagoras theorem is credited to because he was the first to mathematically prove this observation.

Pythagoras and his students believed that everything in this world dealing with math, and feels that everything can be predicted and measured in cycles beritme. He believes the beauty of mathematics because all natural phenomena can be expressed in numbers or comparative numbers. When students Hippasus find that \ sqrt {2}, the hypotenuse of a right triangle isosceles right-angled to the side of each one, is irrational, Pythagoras decided to kill him because they could not refute the evidence presented Hippasus