Please Share this article is useful !
Raden Oma popular rhythm with the name Rhoma Irama born in Tasikmalaya, December 11, 1946, Male 'patrician' is the second son of fourteen children, eight boys and six girls (eight siblings, four sisters and two brothers Seibu's default his stepfather). His father, Raden Burdah Anggawirya, White Eagles a guerrilla commander, gave him the name 'rhythm' as sympathetic to New Rhythm theatrical group from Jakarta who had invited to entertain troops in Tasikmalaya. Before moving to Tasikmalaya, his family lived in Jakarta and in the city where his brother, Haji Muharam Benny was born.

Before moving to Tasikmalaya, his family lived in Jakarta and in the city where his brother, Haji Muharam Benny was born. After several years of living in Tasikmalaya, his family including his brother, Haji Benny Muharram, and her sisters, Handi and Ance, moved back to Jakarta and stayed at Jalan Cicarawa, Bukit Duri, then moved to Bukit Duri Rise. This is where they spend their teenage years until 1971 and then moved again to Tevet.

Rhoma been seen since early childhood artistic talent. Stopped crying every time his mother, Tuti Juariah humming the songs. Login zero grade, he was starting to like the song. His interest in the larger track when entering elementary school. Treading class 2 SD, he was able to bring the songs of Western and Indian well. He likes to sing the song No Other Love, beloved mother, and Bilye Buchariajaya Mera song sung by Lata Maagiskar. In addition, he also enjoys Middle Eastern songs sung Umm Kaltsum. 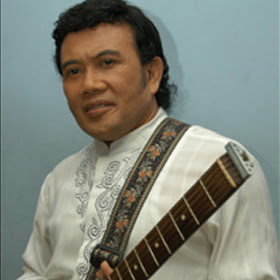 His musical talent may come from his father who played the flute and sang eloquent songs Cianjuran, a typical Sundanese arts. In addition, his uncle called Arifin Ganda like teaching Japanese songs when Rhoma still small. Her experience singing Indian songs when she was elementary school, pop songs and rock the West until the late 1960s and then switched to Malay music, making songs and music that was brought on stage more dynamic, melodic and interesting.

Because of the age of her brother Benny Rhoma not much different, they always go together-compact and be a pair. Unlike the more commonly lazy brother joined the Koran in the mosque or religious scholars, Rhoma always follow study diligently. Whenever his mother asked if her brother's father joined the Koran, Rhoma always answer yes. To sekolahpun they left together. With a tandem bike, and they went back to school in SD Kibono, Manggarai.

In elementary school, singing talent Rhoma increasingly visible. Rhoma is the most diligent student when told to come to the front to sing. And unique, Rhoma not the same as other students who like to be shy in front of the class. Rhoma singing loudly to be heard in the other classes. Attention students greater because Rhoma not sing children's songs or the national anthem, but songs of India.

Her talent as a singer got the attention of senior singers, Bing Slamet Rhoma seeing impressive performances when singing a western song in the party at school. One day when Rhoma still in grade 4, Bing took him perform in a show at the House SBKA (Railway Union) in Manggarai. It is a pride for Rhoma.

Since then, though not thought to be a singer, Rhoma is not separated from the music. With own business, he learned to play the guitar to advanced. Because so crazy about crazy with the guitar, Rhoma often makes her furious. Every time he came home from school, the first one he was looking for was a guitar. Similarly, every time he came home, he brought the guitar almost always.

Once upon a time, his mother told Rhoma keep his brother, but Rhoma prefers to play the guitar. Because of him, his mother robs his guitar and threw it in the direction of the guava tree to break. The incident made Rhoma sad because the guitar is her number one friend.

In the development of the studied music, Rhoma began to realize that even though his father and mother - the couple bled nobility - is a fan of music, they still think the world of music is not something to be proud of or used as a profession. His mother often shout 'noisy' every time he sang and thought that music would impede school. This fact makes it Rhoma musical talent from growing outdoors in the house because he lacks the support.

When Rhoma still 5 th grade in 1958, his father died. The father left eight children, namely, Benny, Rhoma, Handi, Ance, Smith, Eni, Herry, and Yayang. When her brother, Benny was sitting in class one junior high school, his mother married a military officer, Raden Wijaya Soma, which is related patrician family and was bleeding. Her stepfather was carrying two children from a previous wife and after her marriage to Mrs. Rhoma, the mother gave birth to two more children.

When her father was alive, his feudal atmosphere. Day-to-day with his father and mother spoke Dutch. Everything should be completely organized and using certain manners. The helper must call the children as the Den (raden). Children should take a nap and eat together. His father also did not hesitate to punish them with blows if it makes a mistake, such as playing rain or absent.

Rhoma family circumstances at the time Tevet is quite pretty rich when compared with the surrounding community. Her house is flashy and they have some cars like the Impala, luxury cars belonging to that era. Rhoma also always dressed nice and expensive.

However, feudal atmosphere was no longer lumpy after her stepfather was present in the middle of their families. Even from the stepfather is, in addition to his uncle, Rhoma got 'wind' to his musical talents. Gradually stepfather bought musical instruments such as acoustic guitar, bongo, and so on.

World Rhoma in childhood apparently not just the world of music. Rhoma also love fist fights with other children. Their peers when it was quite loud. Children then tend to cluster in the gang, and a gang with other gang against each other, or at least competing. Thus, inter-gang fights are inevitable.

In Bukitduri homes, almost every village in the area there is a gang (youth group). In Bukitduri no BBC (Bukit Duri Boys Club), at no Kenari Kenari Boys, Cobra Boys, and so on. From Bukitduri Puteran, and from Manggarai many young people who join the Gang of Cobra. The gangs against each other so that the commotion is always almost happens every time they met.

One thing is quite prominent in the self Rhoma are his friends almost always make Rhoma as a leader. Of course, when his gang clashed with another gang, Rhomalah are expected to show up at the front, to fight. Despite never winning a few times, Rhoma also often battered, and even had injuries severe enough for 15 children in the area attacked Megaria.

Because of stubbornness that then Rhoma several times had to stay the class, so the embarrassment he frequently changed schools. Three junior class lived in Medan. When he left at his uncle's house. But not long after he had moved back to the XV SMP Negeri Jakarta.

Delinquency Rhoma continued until high school. While in high school Jakarta District VIII, he had fled from the classroom through the window because he wanted to play music with his friends who were waiting for him outside. His love of music and fighting outside and inside the school and out of school often makes high school. In addition to the SMA VIII Jakarta, he has also been noted as high school students in Jakarta PSKD, St Joseph in Solo, and he finally settled on August 17 SMA Tebet, Jakarta, not far from his home.

In the high school was Rhoma could get through a very bitter. He had a musician on the streets of the city of Solo. There he was accommodated at the home of a musician named Mas Gil. In fact, before the 'stranded' in Solo, he intends going to study religion in Pesantren Tebuireng Jombang. However, because it does not buy a ticket, Rhoma, Benny brother, and three others, Daeng, Umar, and Harris had to play cat and mouse with the conductor during the trip. Instead of constantly agitated for fear of getting caught and dropped on a deserted road, they finally pick off at Station Webcam. From Jogja, they take the train again towards Solo.

In Solo, Rhoma continue their education in high school St. Joseph. School fees earned from busking and selling some clothes he brought from Jakarta. However, because the school does not pass in Solo, Rhoma have to go to Jakarta and continuing in high school graduation until August 17 1964. He then continued his studies at the Faculty of Social and Political University August 17, but only lasted a year because interest Rhoma to the world of music was too large.

In the seventies, Rhoma already a famous singer and musician after ups and downs in a band of music, ranging from band Gayhand 1963. Shortly thereafter, he moved in. Orchestra Chandra Leka, until eventually formed his own band called Sonnet that since October 13, 1973 began to waver. Together they lead a group Sonnet, Rhoma recorded ever earn 11 Golden Record of tapes.

In 1972, he married Veronica who later gave him three children, Debby (31), Fikri (27) and Romy (26). But unfortunately, Rhoma Veronica finally divorced in May 1985 after about a year before marrying Ricca Rhoma Rachim - his partner in several films like Love Melody, Storms in Early Happy, Camellia, Love Triangle, Melody of Love, Devotion, Sacrifice, and Satria Bergitar . Until now, Ricca stick with Rhoma as a wife.

His success in the music world and the art world role Rhoma had set up a company making Rhoma Irama Films Productions movie that succeeded in producing films, among them Struggle and Prayer (1980) and Love Twins (1984).

Now, Rhoma commonly called Pak Haji, a lot of his time filling both through music and preaching sermons on television up to the corners of the archipelago. With the spirit and distinctive style, which makes the group Rhoma Sonnet as Sound of Moslem religious symbols continue to actively expand.