Please Share this article is useful !
Joseph John Thomson was born in Creetham Hill, a suburb of Manchester on December 18, 1856. He signed up at Owens College, Manchester in 1870, and in 1876 registered at Trinity College, Cambridge as a regular student. He became a member of Trinity College in 1880, when he became the recipient of the Wrangler and Smith (2nd). He remained a lifelong member of Trinity College. He became a lecturer in 1883, and became a professor in 1918. He is a professor of experimental physics at the Cavendish Laboratory, Cambridge, where he replaced John Strutt, 3rd Baron Rayleigh, from 1884 to 1918 and became a distinguished professor of physics at Cambridge and the Royal Institution, London.

Thomson recently was interested in the structure of the atom which is reflected in his book entitled Treatise on the Motion of Vortex Rings which won him the Adams Prize in 1884. His book, entitled Application of Dynamics to Physics and Chemistry appeared in 1886, and in 1892 he published a book entitled Notes on Recent Researches in Electricity and Magnetism. Work recently wrapped up the results obtained subsequent to the emergence of James Clerk Maxwell's treatise known and often referred to as the third volume of Maxwell. Thomson collaboration with Professor J.H. Poynting to write a physics book in four volumes, entitled Properties of Matter and in 1895, he produced the book Elements of the Mathematical Theory of Electricity and Magnetism, fifth edition, published in 1921. 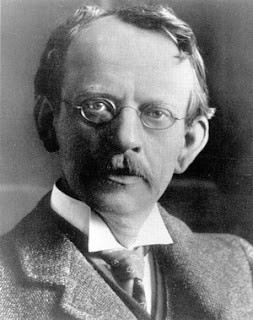 In 1896, Thomson visited the United States to give a course of four lectures, which summarized the new studies at Princeton University. His lecture was published under the title next Discharge of Electricity through Gases (1897). Upon his return from the United States, he obtained the most brilliant job in his life studying cathode rays mounting to the discovery of the electron, which was discussed during the course of the evening lecture to the Royal Instution on Friday, April 30, 1897. His book Conduction of Electricity through Gases published in 1903, described by Lord Rayleigh as a review of the "great days at the Cavendish Laboratory". The next edition, written in collaboration with his son, George, in two volumes (1928 and 1933).

Thomson returned to America in 1904, to deliver six lectures on electricity and matter at Yale University. The lecture contains some important statements about atomic structure. He discovered a method to separate the types of atoms and molecules are different, using a positive light, an idea developed by Francis Aston, Dempster and others, which led to the discovery of many isotopes. And again, for it is only mentioned and he wrote books such as The Structure of Light (1907), The Corpuscular Theory of Matter (1907), Rays of Positive Electricity (1913), The Electron in Chemistry (1923) and his autobiography, and book Recollections and Reflections (1936), among many other publications. Thomson, a recipient of the order for service, inaugurated in 1908.

He was elected to the Royal Society in 1884 and became president during 1916-1920; medal he received the Royal and Hughes in 1894 and 1902, and obtained the Copley Medal in 1914. He was awarded the Hodgkins Medal (Smithsonian Institute, Washington) in 1902; Franklin Medal and Scott Medal (Philadelphia), 1923; Mascart Medal (Paris), 1927; Dalton Medal (Manchester), 1931, and the Faraday Medal (Institute of Civil Engineers) on in 1938. He was President of the British Association in 1909 (and of Section A in 1896 and 1931) and he holds an Honorary Doctorate from the University of Oxford, Dublin, London, Victoria, Columbia, Cambridge, Durham, Birmingham, Göttingen, Leeds, Oslo, Sorbonne, Edinburgh , Reading, Princeton, Glasgow, Johns Hopkins, Aberdeen, Kraków, and Philadelphia.

In 1890, he married Rose Elisabeth, putir Sir George E. Paget, K.C.B. They were awarded a son, now Sir George Paget Thomson, professor emeritus in physics at the University of London, who was also awarded the Nobel Prize in Physics in 1937, and a daughter. J. J. Thomson died on August 30, 1940.

Overview of the Electron 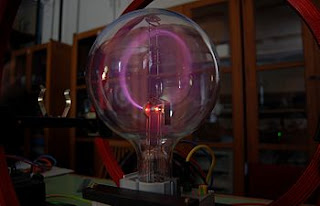 Electrons are negatively charged subatomic particles and are generally written sebaga e-. Electrons do not have the basic components of any known or substructure, so he believed to be an elementary particle. The electron has a mass of about 1/1836 the mass of a proton. angle momentum (spin) of electrons is intrinsically half integer values ​​in units of h, which means that it includes fermions. Antiparticles of electrons called positrons, which are identical to electrons, but positively charged. When an electron collides with a positron, both are likely to be mutually berhambur or totally destroyed, menghasilan a pair (or more) of gamma ray photons. Electrons, which belong to the first generation lepton particle family, betisipasi the gravitational interaction, the interaction of electromagnetic and weak interactions. equally bleak all matter, electrons have properties of both a particle and bath tub wave (wave-particle duality), so that it can collide with other particles and berdifraksi like light. Because electrons including fermions, two different electrons can not occupy the same quantum state in accordance with the Pauli exclusion principle.

The concept of electrical charge that can not be divided again theorized to explain the chemical properties of an atom by a natural philosopher Richard Laming early in 1838; name electron was introduced to label this charge in 1894 by Irish physicist George Johnstone Stoney. Electron been identified as a particle in 1897 by J. J. Thomson.