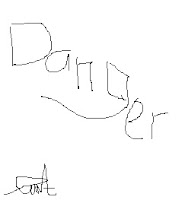 Dr. Syamsi Hassan Pasha in his book Hamasa fi Udzun Syâb (Whispers In Youth) explains that the most dangerous type of drug is a type of drug that causes addiction mental or organic, such as opium and its derivatives derivation. The names and types of drugs and the dangers are:

Opium is the most dangerous type of narcotic. Consumed by directly swallowed or taken with tea, coffee or smoked as a cigarette or syisya (cigarette-style Middle East). Opium is obtained from the fruit of the tree of immature opium slashed by up to secrete a sticky white sap.

At first, consuming opium will feel fit and able to imagine and talk, but this does not last long. Soon will be impaired mental state and ends with a deep sleep even coma.

If a person is addicted, the opium would be part of his life. His body will not be able to again carry out its functions without taking the usual dose of opium. He will feel tremendous pain if you can not get it. His health will decrease drastically. The muscles of the addict will wither, weakened memory and appetite decreased. His eyes had cyanosis and weight continues to shrink.

People who take morphine will feel relief (agility) and fitness that develops into a strong desire to continue taking them. From here, the dosage was continually added to obtain ecstasy (pleasure) are the same.

Addiction to narcotic substance will cause nose bleeding (nosebleeds) and vomited repeatedly. Addicts will also experience weakness throughout the body, disturbance and mouth dryness understand something. The addition of a dose will cause frustration on the respiratory center and decreased blood pressure. This condition can lead to coma resulting in death.

Narcotic ingredient is a white crystalline powder form resulting from the distillation of morphine. Became the most expensive drugs, the most powerful in creating addiction (dependence) and the most dangerous to health in general.

Initial audience will feel fresh, light and cheerful. He will experience cravings along with repeated consumption. If so, then he will always need larger doses to create the same ecstasy. Because of that, she had to gasp for it, until there is no more gaiety and cheerfulness. Only one desire, to obtain more doses to escape the unbearable pain and muscle stiffness due to discontinuation.

Cocaine extracted from the coca plant that grows and develops in the mountains Indies in South America (Latin) since 100 years ago. Consumed cocaine by inhalation, so absorbed into the nasal mucous membranes and then straight to the blood. Therefore, olfactory cocaine many times can cause ulceration in the nasal mucous membrane, and sometimes can lead to the breakdown of the wall between the two nostrils.

Every year, the U.S. spends $ 30 billion budget for cocaine and krak. No less than 10 million Americans consume cocaine on a semi-regular basis. Use of cocaine in the short term bring feelings of joy and merry-fresh-fit. But it later emerged feelings of anxiety and fear, to hallucinations.

The use of cocaine in high doses causes insomnia (sleeplessness), tremors and convulsions (cramps). Here, addicts feel insects crawling under the skin. Digestion was disrupted, dilated pupils, and his blood pressure rise. In fact, sometimes can cause sudden death.

Cannabis has a designation which amounts to more than 350 names, in accordance with the planting and consumption, among others, marijuana, hashish, and hemp. The most important substances are substances contained in trihidrocaniponal marijuana (THC).

Cannabis users experience a state of ecstasy, accompanied by giggles and sniggering without clear justification. She experienced auditory and visual hallucinations. Unlike alcohol drinkers seem brutal and aggressive behavior, the cannabis users often even a coward.

He has trouble recognizing the shape and size of objects seen. Pecandunya also feel the time goes so slow. His recollection of the event some time ago was a mess. Her eyes were red and his heart racing. If you stop taking marijuana, he will feel depressed, anxious, chills and insomnia. But marijuana addiction is usually easily removed. In the long term, marijuana addicts will lose the passion for life. Being lazy, weak memory, stupid, can not concentrate and are driven to commit a crime.