Please Share this article is useful !
Biography of RA Kartini - Maya Raden Kartini or often abbreviated as RA Kartini was born on April 21, 1879 in the city of Jepara, Central Java. He was the son of a nobleman who was very devout in customs. After graduating from elementary school he was not allowed to continue their education to a higher level by the parents. He secluded while waiting to be married.

Kartini small very saddened by this, but he did not dare to oppose for fear of being considered rebellious child. To relieve his grief, he collected textbooks and other science books are then read in the garden house accompanied Simbok (assistants). Finally read into his interest, no day without reading.

All books, including reading the newspaper. If there is difficulty in understanding the books and newspapers he reads, he always asks his Father. Through this book, Kartini interested in the advancement of women think Europe (the Netherlands, who was still colonized Indonesia). Arising desire to promote women in Indonesia. Women are not only the kitchen but also must have knowledge. He began by collecting the girls to teach writing and other sciences. 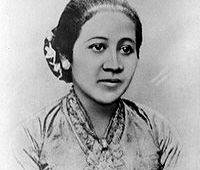 Amid busy he did not stop to read and also write a letter to his friends who are in the Netherlands. Before long he was writing a letter to Mr.JH Abendanon. He pleaded awarded a scholarship to study in the Netherlands. The scholarship had not gotten used Kartini as he married off by her parents to Raden Duke Joyodiningrat. After marriage he took her to the Apex. Her husband understood Kartini and supporting women to establish a school.

Thanks to his perseverance Kartini successfully established the School Women in Semarang, Surabaya, Yogyakarta, Malang, Madison, Cirebon and other areas. The school name is "Kartini School". Fame does not make Kartini be arrogant, he remained polite, respectful family and anyone else, does not distinguish between poor and rich. On 17 September 1904, Kartini died at the age of 25, after she gave birth to her first son. After Kartini died, Mr.JH Abendanon posted the letters RA Kartini had sent to his friends in Europe. The book was entitled "DOOR DUISTERNIS TOT LICHT" which means "Light After Dark".

Currently hopefully in Indonesia will be reborn-Kartini Kartini else will fight for the interests of the people. In the era of Kartini, late 19th to early 20th century, the women of this country have not gained freedom in many ways. They are not allowed to obtain a higher education like the guy has not even been allowed to determine the affinity / her own husband, and so forth. Kartini who are not free to choose even felt they had no choice at all because it was born as a woman, also always treated differently by relatives and friends are male, and envy the freedom Dutch women, eventually growing desire and determination in his heart to change habits that are less good. Recently, the determination of the date of birth as the big day Kartini somewhat moot. With a variety of arguments, each side gave their opinion.

People who do not so agree, there are just not celebrate Kartini Day, but at the same time to celebrate Mother's Day on December 22. The reason they are so no favorites with women heroes of Indonesia. But more extreme to say, there is another heroine is more powerful than RA Kartini. According to them, the region's struggle was in Jepara Kartini and Apex alone, Kartini also never bear arms against the invaders. And various other reasons. While they were pro even said Kartini is not just a figure of female emancipation elevating women Indonesia alone but is meant national figure, with new ideas and the reform he has been fighting for the interests of the nation. The way he thought was in the national scope.

Although the Youth Pledge have not triggered the time, but his thoughts are not confined to the area of land kelahiranya or Java. Kartini has reached national maturity to think that nationalism is like that proposed by the Youth Pledge 1928. Regardless of the pros and cons, in this nation's history we know many of the names we like Cut the heroine of his' Dien, Cut Mutiah, Nyi. Ageng Serang, Dewi Sartika, Nyi Ahmad Dahlan, Ny. Walandouw Maramis, Christina Martha Tiahohu, and more.

They fought in the area, at the time, and in different ways. There was a struggle in Aceh, Java, Maluku, Manado and others. There was a struggle in the Dutch colonial era, the Japanese colonial era, or after independence. Some are struggling with raised arms, there is through education, through the organization and there are other ways. They are all warriors of the nation, nation heroes who deserve our respect and emulate. Raden Kartini Maya itself is the hero who takes special place in our hearts with all ideals, determination, and actions. The ideas of it had been able to mobilize and inspire the struggle of his people from ignorance is not realized in the past. With the courage and sacrifice are sincere, he was able to inspire his people from the shackles of discrimination. For women alone, with initial efforts are now women in this country have been enjoying the so-called equal rights. The struggle is not over, in this era of globalization, there are many perceived oppression and unfair treatment of women.