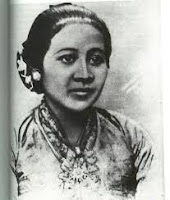 Kartini was born into an aristocratic Javanese family in a time when Java was still part of the Dutch colony, the Dutch East Indies. Kartini's father, Raden Mas Sosroningrat, became head of Jepara district, and his mother was the first wife of Raden Mas', but not the most important. At this time, polygamy was a common practice among nobility.Dia also wrote a letter of a Javanese Princess.

Kartini's father, RMAA Sosroningrat, initially Mayong district chief. His mother Ngasirah MA, daughter of Kyai Haji Madirono, a religion teacher at Teluwakur, Jepara, and Siti Aminah Haji Nyai. At that time, colonial rule determined that the District Chief to marry a member of the aristocracy and nobility as MA Ngasirah is not high enough, his father married a second time to Raden Ajeng Woerjan (Moerjam), a direct descendant of the King of Madura. After a second marriage, Kartini's father was appointed as Head of Jepara, replacing his father of his second wife, RAA Tjitrowikromo.

Kartini was the fifth child and second eldest daughter in a family of eleven, including half siblings. He was born into a family with a strong intellectual tradition. His grandfather, Prince Ario Tjondronegoro IV, became head of the District at the age of 25, while older brother Sosrokartono Kartini is a linguist.

Kartini's family allowed her to attend school until he was 12 years old. Here, among other subjects, she learned fluent Dutch, an unusual accomplishment for Javanese women at the time. After he turned 12 he 'secluded' at home, a common practice among Javanese nobility, to prepare young girls for their wedding. During seclusion girls were not allowed to leave their parents' home until they were married, and where the authority points above them transferred to their husbands. Kartini's father lighter than some during his daughter's seclusion, giving such privileges as embroidery lessons and occasional appearances in public for special events.

During her seclusion, Kartini continued to educate himself. Because Kartini could speak Dutch, she received several Dutch pen friends. One of them, a girl named Rosa Abendanon, a very close friend. Books, newspapers and magazines in Europe given the interest Kartini European feminist thinking, and fostered a desire to improve the conditions of indigenous women, who at that time had a very low social status.

Kartini's omnivorous reading included Semarang newspaper De Locomotief, edited by Pieter Brooshooft and leestrommel, a set of magazines circulated by bookshops to subscribers. She also read cultural and scientific magazines and women's magazines Dutch De Hollandsche Lelie, which he began to send contributions are published. From her letters, it was clear that Kartini read everything with a lot of care and attention. The books he read before he was 20 included Max Havelaar and Love Letters by Multatuli. He also read De Stille Kracht (The Hidden Force) by Louis Couperus, works of Frederik van Eeden, Augusta de Witt, author of Romantic-feminist Mrs. Goekoop de-Jong Van Beek and an anti-war novel by Berta von Suttner, Die Waffen Nieder! (Lay Down Your Arms!). All are in the Netherlands.

Kartini concern not only in the field of women's emancipation, but also the problem of his society. Kartini saw that the struggle for women to obtain their freedom, autonomy and legal equality was just part of a broader movement.

Kartini parents arranged her marriage to the Duke Joyodiningrat Raden, Chief District Apex, who already had three wives. He married on 12 November 1903. This is contrary to the wishes of Kartini, but he agreed to appease his father's illness. Her husband understood Kartini goals and enable them to establish a school for women in the east porch Rembang district office complex. Kartini's only child was born on 13 September 1904. A few days later, on 17 September 1904, Kartini died at the age of 25. He was buried in the village of Fur, Apex.

Inspired by the example of Kartini, Van Deventer family founded the Kartini Foundation which builds schools for girls, 'Kartini Schools' in Semarang in 1912, followed by the other girls schools in Surabaya, Yogyakarta, Malang, Madison, Cirebon and other areas.

In 1964, President Sukarno announced the date of birth Kartini, 21 April, as 'Kartini Day' - a national holiday in Indonesia. This decision has been criticized. It has been proposed that Kartini's Day should be celebrated in conjunction with Indonesian Mothers Day, on December 22, so the choice of Kartini as a national heroine would not overshadow other women who do not like Kartini, took up arms against the invaders.

Conversely, those who recognize the importance of Kartini argue that not only was she a feminist who raised the status of women in Indonesia, he was also a nationalist figure, with new ideas who struggled on behalf of the people, including the national struggle for independence.

After Kartini died, Mr JH Abendanon, Minister of Culture, Religion and Industry in the East Indies, collected and published the letters that Kartini had sent to his friends in Europe. The book is titled Door Duisternis tot Licht (Out of Dark Comes Light) and was published in 1911. He went through five editions, with some additional letters included in the last edition, and translated into English by Agnes L. Symmers and published under the title Letters a Javanese Princess.

Issuance of Kartini's letters, written by a native Javanese woman, attracted great interest in the Netherlands and Kartini's ideas began to change the way the Dutch viewed native women in Java. Her ideas also provided inspiration for prominent figures in the struggle for Independence.

The condition of women in Indonesia

In her letters, Kartini wrote about his views on the social conditions prevailing at that time, particularly the condition of native Indonesian women. Most of her letters protest the tendency Javanese Culture to impose obstacles to the development of women. She wanted women to have the freedom to study and learn. Kartini wrote ideas and ambitions, including Zelf-ontwikkeling, Zelf-onderricht, Zelf-vertrouwen, Zelf-werkzaamheid and Solidariteit. These ideas are all based on Religieusiteit, Wijsheid en Schoonheid, namely, belief in God, wisdom, and beauty, along with humanitarianism (human) and Nationalism (nationalism).

Kartini's letters also expressed hope the support from abroad. In correspondence with Estell "Stella" Zeehandelaar, Kartini expressed her desire to be like a European youth. He described the suffering of Javanese women fettered by tradition, unable to study, secluded, and who must be prepared to participate in polygamous marriages with men they do not know.
Religion

Kartini also expressed criticism of religion. He questioned why the Quran must be memorized and spoken with no obligation to actually understand it. He also expressed the view that the world would be more peaceful if there were no religion to provide reasons for disagreements, discord and offense. She wrote "Religion must guard us against the sins of commission, but more often, sins committed in the name of religion"

Kartini also ask questions in a way in which religion has provided justification for men to pursue polygamy [citation needed]. For Kartini, the suffering of Javanese women reached the summit when the world was reduced to the walls of their homes and they are ready to polygamous marriages.
Vegetarian Lifestyle

It is known from his letters dated October 1902 to Abendanon and her husband, who at the age of 23, Kartini had a mind to live a vegetarian life. "It has been for sometime that we're thinking of doing it (to be vegetarian), I even ate only vegetables for years now, but I still do not have enough moral courage to continue. I was too young." Kartini wrote.

He also stressed the relationship between this kind of lifestyle with religious thoughts. He also quoted, "Living life as a vegetarian is a wordless prayer to the Almighty."
Continuing studies and teaching

Kartini loved her father very clearly that despite a deep affection for him to be another obstacle to the realization of his ambition. He is progressive enough to allow her daughters school until the age of 12 but at that point the door to more schools closed. In his letters, his father also expressed his affection for Kartini. Finally, he gave permission for Kartini to study to become a teacher in Batavia (now Jakarta), although previously he had been prevented from continuing his studies in the Netherlands or to attend medical school in Batavia.

Kartini's desire to continue his studies in Europe also expressed in his letters. Some pen friends worked on her behalf to support Kartini in this endeavor. And when finally Kartini's ambition was thwarted, many of his friends expressed their disappointment. Eventually she plans to study in the Netherlands turned into a plan to travel to Batavia on the advice of Mrs Abendanon that this would be the best for Kartini and her sister, Rukmini.

However, in 1903 at the age of 24, she plans to study to become a teacher in Batavia came nothing. In a letter to Mrs Abendanon, Kartini wrote that the plan had been abandoned because she's getting married ... "In short, I no longer wish to take advantage of this opportunity, because I am getting married ..". This is despite the fact that for the most part, the Dutch Education Ministry finally gave permission for Kartini and Rukmini to study in Batavia.

As the wedding approached, Kartini's attitude towards Javanese traditional customs began to change. She became more tolerant. She began to feel that her marriage would bring good luck to its ambition to develop a school for native women. In her letters, Kartini mentioned that not only honored her husband who supports his desire to develop the woodcarving industry in Jepara and the school for native women, but he also mentioned that he would write a book. Unfortunately, this ambition unrealized as a result of his premature death in 1904 at age 25.