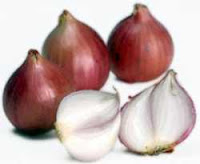 Red Onion is one of the herbs that are always present along with the garlic. Another name for onion is scallions, or in a language called Allium cepa Laitin. The most widely used is the bulb of onion, even though some culinary traditions also use the leaves and flower stalks as food seasonings.

Shallots mengdung compound quercetin, which is an antioxidant polyphenol compounds in the flavonoid family. Quercetin compounds associated with reduced risk of cancer because of its anti-inflammatory properties owned. Quercetin is also a natural remedy to cope with arthritis and other diseases caused by inflammation.

Healthy compounds are also suspected to also be able to improve prostate health in men and may also be an effective weapon against prostate cancer. Shallots also has natural antihistamine properties that can reduce allergic reactions.

In addition, onions also contain vitamin C, copper, calcium, vitamin A, and vitamin E with high levels. As it is known that vitamin A, E and C is an excellent antioxidant. While copper is an essential mineral in the maintenance of healthy bones and joints to prevent osteoporosis.

Shallots are also known to contain sulfur compounds that are beneficial to health. Sulfur in onions are responsible for the spicy taste, aroma onion and release gases that irritate the eyes when the onion is cut.

The content of sulfur in the onions also responsible for the antimicrobial and antibacterial properties and is considered as a powerful nutrient for fighting cancer cells. There is also evidence that the sulfur found in onions can overcome the symptoms of asthma and other respiratory problems associated with inflammation.

The results of the study also shows that onions may help ward off colon and stomach disorders. Eating onion in high amounts has been associated with a lower risk of colon cancer and colorectal cancer.

Organisms in the onions is expected to drive the growth of healthy bacteria in the intestines while inhibiting the growth of bad bacteria.