Danger of Cigarettes For Health 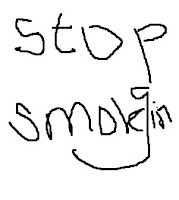 A. Danger of Cigarettes For Health

Maybe it's not unusual anymore when we hear that smoking is harmful to human health, because it actually has a lot of warnings and messages that we often hear from the media about the dangers of smoking is even actually a warning about the dangers of smoking on cigarette packaging itself . But strangely still many people who smoke, some just want the child is considered as slang or may have become a necessity for him. What is clear whatever the reason, we should avoid cigarettes early on, because the effects of cigarette smoke can cause a variety of health problems ranging from mild to severe that can lead us to death. It is not too much,. If I said that, but that's the negative effects of smoking. Maybe we will not feel the effect directly but the effects will be felt in a long time.

And according to research, it turns out that will receive the negative effects of cigarette smokers is not only active, but also passive smokers also will receive the negative effects of tobacco. And it is precisely that effect received by second-hand smoke would be far more dangerous than active smokers. There may be some of you who are still confused with the term passive smokers. So, second-hand smoke is a term for someone who is not a smoker but the people who are at or near the orang2 smoking so he indirectly is often inhaling smoke released by active smokers. And why are more dangers in comparing active smokers because the smoke inhaled by passive smokers in will go directly to the lungs - lungs through your nose. Wah wah wah ... cigarettes has become a disaster for everyone.
Actually why smoking can be so dangerous to health? This is caused from the content contained in these cigarettes. These substances contained in cigarettes:

1. Nicotine
This substance containing opium could cause a person addicted to smoking cigarettes trus
~ The effect on the human body:
lead to addiction / dependence
damage the brain tissue
cause rapid blood clot
harden artery walls

2. Tar
The manufacture of asphalt that can be attached to the lungs and can cause irritation and even cancer
~ The effect on the human body:
kill cells in the bloodstream
Increasing lung mucus production diparu
Cause of lung cancer

3. Carbon monoxide
The gas can cause heart disease because it can bind oxygen gas in the body.
~ The effect on the human body:
binds to hemoglobin, so that the body lacks oxygen
blocking transport in the blood

4. Carcinogenic Substances
~ The effect on the human body:
Trigger the growth of cancer cells in the body

5. Irritant substances
Pollute the airways and air sacs in the lungs
Cause coughing

B. Some of the hazards that caused by smoking

1. Lung Cancer
Given about 90 percent of lung cancer cases caused by smoking. This is because the smoke will be inhaled entry into the lungs. Substances from tobacco smoke will stimulate the cells in the lung to grow abnormally. An estimated 1 out of 10 moderate smokers and 1 of 5 heavy smokers will die from lung cancer.

3. Breast Cancer
Women who smoke are more at risk of developing breast cancer. The study shows women who started smoking at age 20 and 5 years before she got pregnant the first time greater risk of breast cancer.

4. Cervical Cancer
About 30 percent of deaths from cervical cancer are caused by smoking. This is because women who smoke are more susceptible to infection by a sexually transmitted virus.

5. Esophagus Cancer
The study found that cigarette smoke damage the DNA of cells of the esophagus causing esophageal cancer. About 80 percent of esophageal cancer cases has been linked to smoking.

6. Digestive Cancer
Although cigarette smoke into the lungs, but there was some smoke that swallowed thereby increasing the risk of cancers of gastrointestinal (digestive).

7. Kidney Cancer
When a person smokes, the smoke containing nicotine and tobacco will go into the body. Nicotine along with other harmful chemicals such as carbon monoxide and tar cause changes in heart rate, respiration and blood pressure circulation. Carcinogens are filtered out of the body through the kidneys also alter DNA and cell damage kidney cells. These changes affect the function of the kidneys and lead to cancer.

8. Oral Cancer
Tobacco is the leading cause of oral cancer. Given smokers six times more likely to develop oral cancer than people who do not smoke, and people who smoke smokeless tobacco risk 50-fold greater.

9. Throat Cancer
Smoke inhaled before getting into the lungs will pass through the throat, so the cancer will be associated with smoking.

10. Heart Attack
Nicotine in cigarette smoke causes the heart to work more quickly and increase blood pressure. While carbon monoxide take more oxygen in the blood that makes the heart pump more blood. If the heart is working too hard plus high blood pressure, it can cause a heart attack.

11. Coronary Heart Disease (CHD)
The majority of coronary heart disease due to smoking and will deteriorate if you have other illnesses such as diabetes mellitus.

12. Atherosclerosis
Nicotine in cigarette smoke may accelerate arterial blockage can be caused by a buildup of fat. This will cause scarring and thickening of the arteries that lead to atherosclerosis.

13. Chronic Obstructive Pulmonary Disease (COPD)
This condition causes the blood flow is blocked making breathing difficult one, and about 80 percent of cases of COPD are caused by smoking. This condition can lead to emphysema (shortness of breath caused by damage to the air sacs or alveoli) and chronic bronchitis (cough with lots of mucus that occur continuously for 3 months).

14. Impotence
For men in their 30s and 40s, smoking increases the risk of erectile dysfunction about 50 percent. This is because smoking can damage blood vessels, nicotine narrow the arteries thereby reducing blood pressure and blood flow to the penis. If someone is experiencing impotence, it could be an early warning that cigarettes are already damaging other areas of the body.

C. How to Stop Smoking

• a genuine intention to quit smoking.
• Learn hate cigarette
• Bergaulah with people who do not smoke
• More often go to places that are air-conditioned office
• Move all items associated with smoking.
• If you want a cigarette, wait for another 10 minutes.
• Tell your friends and people nearby if we want to stop smoking.
• Reduce smoking little by little.
• Eliminate the habit Bengong or wait.
• Frequently go to the hospital, in order to know the importance of health.
• Find a substitute for cigarettes, such as candy and other - other
• Try and try again if it still fails.