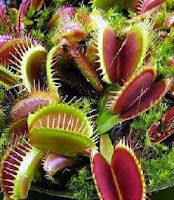 The insect eaters Plants is:

1. This plant is a plant that is plant-eating insect insectivores
2. Venus modified leaf shaped like a hinge and hairy
3. Leaves are open waiting for insects to come, both the leaves will rapidly shut
4. When an insect is trapped it will be digested and absorbed nitrogen

1. Windmill Water Plant is a plant without roots and aquatic plants
2. Windmill Water Plant is a plant eater Animals / insects / carnivore / small vertebrates
3. The plant is mainly composed of free-floating stems, reaching 6 - 11cm in length
4. Trap leaves grow along the 2-3mm grew from 5-9, in a row along the stem near the center of the plant
5. Trap attached to the petioles, which contain air, and assist in flotation,
6. Is a plant that is growing very rapidly and can reach 4-9mm per day, in some cases even generate a new thread every day.
7. As the plant grows from one end to the other end will continue to die
8. The trap is basically composed of two lobes of the same to make a trap shut, Aperture of traps out point, and covered in a layer of hair trigger, which will cause the trap to clap shut as any prey that comes too close.
9. speed trap shut Windmill Water Plant is 10 milli / sec, making it one of the fastest examples of plant movement in the animal kingdom

1. Plants or plant rainbow rainbow is a small genus of carnivorous plants native Australia
2. Rainbow plant name comes from an interesting view their slime covered leaves in the sun
3. Although this plant looks similar to Drosera and Drosophllum, they are not related to the similarity of species and can be distinguished by Zygomorphic flowers with five stamens curve.
4. The special feature of the Rainbow Plant leaves have a round cross section, and they tend to be very long and tapered at the ends.
5. In Plant Leaves Rainbow true leaf surface covered with hair glands that release a sticky mucilaginous substances
6. Plant leaves are covered with hair rainbow gland to trap small insects on the leaves or tentacles as a passive flypaper trap

1. Plant Drosera is a unique plant, which has a sticky tentacles along its leaves to catch insects
2. This plant Drosera tantakelnya can move it over there a sweet liquid as a trap for insects
3. After trapping insects proficiency level, the small sessile glands will digest the insect and absorb nutrients for the growth of meat-eating plants.
4. Characteristic of Plant Drosera tentacles have glands that can be moved, with the sticky, sweet liquid on it.
5. When insects stick to the plant tentacles tentacles move the other so that more trapped insects. Then, the glands will digest the insect and absorb nutrients.
6. Drosera is colorful plants and will trap insects through the open mouth trumpet