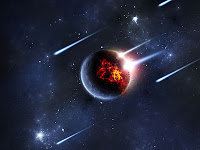 Actually, the fall of the meteor sighting a celestial object called meteoroids into the atmosphere of our planet region. Ordinary people used to call a shooting star because it looks like a bright light moving rapidly towards the earth.

Sometimes, meteors do not penetrate the atmosphere to the surface of the earth due to burn out due to friction with the atmosphere. But sometimes meteor did not burn down, and fell as a meteorite.

At the turn of the years 2010 to 2011 ago, there was an amazing natural event, namely the phenomenon of meteor showers. Meteor showers are falling meteor events across the Earth's atmosphere in large quantities, thus resembling rain. This happens because the Earth passes close to the orbit of a comet. The parts in the form of small flakes comet burn up upon entering the atmosphere, to look like a very beautiful light rain.

Planet Earth is quite often experience a meteor shower as it crossed several comets whose orbits are close to regions on Earth. Among them are, Lyrids meteor, Quadrantids meteors and meteor showers followed by Delta Cancrids.

Some are not passed over the skies of Indonesia, until the news was not heard by the country, except the Lyrids meteor shower happens when the new year. He crossed the northern Indonesia so it can be viewed by the public through the naked eye, or with the aid of a telescope.

Some time ago also there was an event that shook the Indonesian people with the destruction of four houses located in the Jakarta area. Space agency researchers said there were indications that the cause of the destruction of 4 houses was the result of a meteorite fall.

The magnitude of the meteorite that hit four houses in Jakarta and caused the explosion reportedly only of chicken eggs. But the strength and power of destruction is very powerful. That happens because the force generated due to the speed of the stone is the time of entry into the atmosphere is huge.

In fact, in ancient times, dinosaurs and other ancient creatures to extinction because of the enormity of the effect of falling meteorite that size is quite large, causing a giant tidal wave. Really powerful force of nature that can destroy life on this planet.