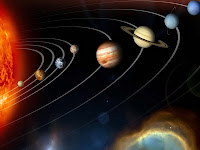 In this case the Sun as the center of gravity. Celestial bodies are found in the solar system consists of planets, satellites, asteroids, meteors, and comets.

In the solar system there are eight planets, namely Mercury, Venus, Earth, Mars, Jupiter, Saturn, Uranus, and Neptune. All the planets around the sun periodically (revolution), in addition to any planet also surround each axis (rotation).

Revolution and rotation of each planet has a different time. Depending distance of each planet to Matahari.Selain Mercury and Venus, the six other planets have satellites. That is the sixth planet is a celestial body that regularly have surrounded him with a certain period.

Pluto, once considered one of the cluster of planets in this solar system. However, the development of science declared that Pluto was no longer considered a planet, but a dwarf planet.

Five planets closest to the Sun than the Earth, namely Mercury, Venus, Mars, Jupiter and Saturn, has been known since the past because of all the planets can be seen with the naked eye. Aristotle introduces the names of the gods in mythology for these planets in the 4th century BC.

Hermes used to name Mercury, Ares to Mars, the planet Jupiter for Zeus, Kronos for the planet Saturn, and Aphrodite for the planet Venus. Along with the rapid advancement of science, the term "planet" changed your understanding of something moving across the sky became yanbg moving objects surround the Earth.

When the heliocentric models have dominated (19th century), when it also began to be regarded as planets that orbit the Sun and the Earth is a planet only.

Until the mid-19th century, all the objects are visible around the sun is called a planet. The number of planets to grow rapidly, and many at the end of this century. Throughout the period of the 1800s, astronomers began to realize that many of the recent discovery that is not the same as the traditional planets. Objects such as Ceres, Pallas and Vesta, which has been classified as planets for almost half a century, finally classified with a new name, the asteroid.

In this context, the absence of a formal definition of planet defined as causing large objects orbiting the Sun. There is no interest to determine the boundaries of sense because of the size between the asteroids and the planets are very different. Furthermore, in the 20th century, Pluto was discovered. Initial observations of the Pluto mention that Pluto has a size larger than the Earth.

IAU (Union internationale Astronomique) finally receives the object as a planet. A closer in finding that the object is actually much smaller than first thought. However, because it is larger than all known asteroids and looks do not exist in large populations, Union internationale Astronomique not change the status for more than 70 years. In the 1990s and early 2000s, there are many objects like Pluto's discovery in a relatively equal. Pluto was found only a small object in a population numbering in the thousands, just like the asteroids Ceres and the days before.

Increasing number of astronomers who want to be re-given understanding Pluto from a planet because the triggered increase in the discovery of similar objects. The discovery of Eris, an object more massive than Pluto, which further demonstrated extensively as the tenth planet, resulting in it becoming increasingly popular.

On August 24, 2006, based on voting, IAU akhiranya make sense of the new planet. As a result, the number of planets in the Solar System was reduced to eight items that successfully clean up the environment (Mercury, Venus, Earth, Mars, Jupiter, Saturn, Uranus and Neptune). Meanwhile, a new class is established, the dwarf planets (Ceres, Pluto and Eris).