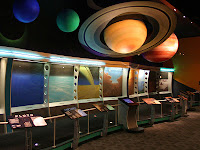 Visit to the planetarium for students especially those who are sitting in elementary school, in addition to add insight about celestial objects such as stars and galaxies traveled the planet as well as cheap and mengasikkan. Planetarium can be visited in Jakarta which is located in the Taman Ismail Marzuki.

Planetarium at the Cikini Kingdom offers full amenities with the sophistication of a great and awesome display. Once inside the building we will see a variety of performances in it. Planetarium serves as a building which shows the performance of education, especially in the introduction of the heavenly bodies.

The uniqueness of this planetarium is invited audience together enjoying the natural beauty and expanse of the solar system in the constellation on the ceiling dome that forms a circle. You will be invited as if looking straight and close to the heavenly bodies.

The facilities offered by the planetarium in Jakarta, among others, shows how much space is quite large, which can accommodate up to three hundred visitors in a single show. Of visitor chairs made in the collapsed position, you can see from the screenshot above shows the sky dome semicircular large.

Big screen planetarium comes from an instrument known as the projector universarium. Tool or projector that function as a driver of the heavenly bodies show it. Each session has a picture show or demonstration of celestial objects of different shapes background too, whether day or night.

In addition, other facilities that you can enjoy while visiting the Planetarium is a three telescopes that had been prepared for the binoculars and see the sky directly. Visitors can make use of this facility during limited hours already made schedule.

c. Shows in the Planetarium

In contrast to the observatory are also located in this area as well, have the planetarium dome is static or can not be opened. So this is just planetarium offers a show with a simulation of the tool projector.

Types of shows that can be watched on different Planetarium at any time in accordance with the rotation schedule. Shows include: The formation of the solar system, the blue Planet Earth, our galaxy the Milky magic and more.

Simulation shows an interesting addition, in the planetarium also provides a library that you can visit any time of the day. Books and journal Astronomy can be found in this library. In addition, many research results of knowledge about the field of Astronomy and collected by perpustakaaan at this planetarium.