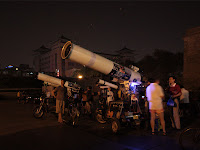 The telescope is a thing that serves to see objects that are very far away, using a tool that we can see clearly and look close. For example, stars in the sky, from the earth we only see white dots that glow but with the help of a telescope we could see even observe the stars and gugusannya with clearer and sharper.

The telescope is a very important tool for astronomical observations. The first time with the aim of astronomical telescope is Galileo. Early preparation telescope made in the visible wavelength range only, but after 1945 the telescope developed into the long-wave radio, and now by the advancement and sophistication of manufacture, the telescope can capture the electromagnetic spectrum, it is after the exploration of outer space.

There are many kinds of telescopes that we can meet, but in principle the telescope can be divided into three types namely telescopes: refractors, reflectors, and a combination of both, namely catadioptric telescope. In Indonesia, there is a space telescope of the oldest, ie Bosscha Observatory, precisely in Lembang, West Java. Bosscha Observatory. Equipped with binoculars the facility, make this place as a place to study astronomy program and a research institute in the field of modern astronomy first in Indonesia

Bosscha Observatory has a very big role, not only in Indonesia but also in Southeast Asia. Education programs, dedication to the community with a facility barengi binoculars that anyone who comes to see objects in the sky. Bosscha name taken from the name of the author Karel Albert Rudolf Boscca in the year 1865 - 1928, the building was constructed by NISV (Nederlandsch Indische Sterrenkundige Vereeninging), in 1951 been managed by the UI Faculty, now part of the Institute of Technology Bandung ITB.

Bosscha As historic function is still well preserved, passed into objects of cultural heritage protected by the government under Law No. 2 of 1992, and in 2008 Bosscha established as one of the objects of national importance that must be protected and secured existence.

The working principle of the telescope is not much different from the microscope objective lens There will be a shadow of real and scaled down, and there eyepiece that works like a loop that serves to enlarge the object or objects. But the bigger objective lens binoculars compared to okulet lens, reversed with what is on the microscope.

Telescopes like what is on Bosscha, until I can see the celestial bodies,? Is it like regular binoculars or a telescope instrument that we usually find in stores? To be clear, the following will be explained about the telescope is in Bosscha, totaling five telescopes, namely:

Telescope is used to view and observe double stars and to measure photometric fisual happened to eclipse stars, and planetary observing. The biggest telescope on the observation that there Bosscha. Refractor is cebng lens that serves to collect light. Given a double naming because there are two telescopes, namely:

The telescope optics producing factory made famous in the city of Jena, Germany Carl Zeiss Jena, began dioprasikan in 1928. The telescope was stored in a building with a roof like a dome shape that can spin as much as 360 degrees. The dome can be opened and closed, opened at the telescope can be rotated in any direction according to the direction of the object to be observed.

To perform astronomical observations or astronomy, the telescope is equipped with the tools to observe the planet, namely: planetary camera, in front of a camera mounted grille right in front of the objective lens in the telescope, also equipped with a ST6 CCD camera that allows observe objects that will not be caught by ordinary photography.

The telescope was made in 1960, is a gift or donation of UNESCO to Bosscha Observatory. Schmidt telescope has a diameter optical correction lenses as wide as 51 cm, 71 cm diameter mirror long and 125 cm focal length. Schmidt telescope with a size of the Milky Way was smaller among other telescopes, much like a regular camera f-ratio.

These binoculars fit and suitable for the survey because it can capture wide angle, 5x approximately 5 square degrees. In Bosccha own binoculars was used to observe objects in the sky from blue to infrared wavelength, and has a sensitivity to light interference.

For the study, the telescope was used to observe the structure of the Milky Way, can determine the supernova, observed sky objects such as comets, asteroids and investigating stellar.

Telescope with a 37 cm diameter objective lens with a focal 7 m is in Bosccha with a roof that can be opened and closed, and includes a telescope with a kind reflaktor or convex lens. The telescope can be used for research on the bright star in the workplace can also be used to measure the distance scale.

The telescope was completed in 1929 driven by the pendulum system which is equipped with a photoelectric fotoeter can only be used at night time only binoculars were used by the public to come.

This telescope is the youngest or new telescope that has a modern use of the other existing telescopes in Bosccha. With a primary mirror diameter 45 cm long and 20 cm secondary mirror. Sepang 540 cm focal point is a combination of the two mirror cassegrain is the kind that has been modified in the reflektornya.

Telescope movement is controlled by the computerized, and the data can be saved in a file. It would help if the same object observed. The telescope is equipped with sophisticated tools, such as:

• Tool spectrograph to obtain spectra in stars or other objects.
• photoelectric photometer is a tool that can be used for light power mengur star or other celestial object.
• Equipped with a CCD camera ST 6B, the same as the Zeiss telescope.
• Telescopes Unitron Reflaktor

Because of the small telescope can be removed and mounted, so that it can carry-where. Objective lens diameter, 10.2 cm long with a 150 cm focal point is a device used to photograph sunspots or sunspots.

In 2007, the building next to a building constructed Bosscha binoculars, made by ITB students majoring in engineering and assisted by students majoring in physics is used to observe the sun, or commonly known as sun glasses. Used to look at the sun's surface, it is useful to global warming. Everything that happens on the surface of the sun can be shown the results through the digital display,

Seeing stars that shine at night has become a sensation, in addition to learning about the science or the science of astronomy, can be a wonderful recreation. Thus, if you want to enjoy the millions of stars in the sky just visit the Observatory Bosscha to try the five existing telescope.