Gundala is a comic character created by Hasmi that first appeared in the comic Gundala Son of Lightning in 1969. Clearly visible influence on American superhero comics character design and the type of power, even though the plot style Indonesia. What story is often portrayed in the city of Yogyakarta, although the film is told in 1982 in Jakarta.

Starting from a researcher genius named Sancaka find serum anti-lightning. Steeped in its ambition as a scientist, he forget birthdays Minarti, lover, resulting breakup. Sancaka a broken heart raced with great hubbub in the pouring rain. Suddenly a lightning struck her. In a coma he was pulled by a force from another planet and adopted by the title of King of Lightning Emperor Kronz, once blessed superhuman abilities, that can emit lightning from his palm.

King Typhoons of royal power gave Bayu run like the wind. Since then, at certain times, he appeared as a crime buster hero with a tight black dress shoes and a red loincloth. His face mask, just looking eyes and mouth, on the side of the mask are ornaments like bird wings.

Sledgehammer is a comic character created by Wid NS. First appear in the title hunt Doctor Satan in 1969. Godam from another dimension that are country named Hammer. Because of its resistance to cruelty Queen Candalani, Godam the infant son of a nobleman's country Godam a fugitive parents rebellious against authority Candalani.

Aquanus is a comic character created by Wid NS. First appear in the title Aquanus at Planet Vibhy in 1968. When a nation attacks Burbur to Zyba planet, the adoptive son of the king sving the infant was rushed to a rocket into space. The rocket fell into the ocean on the planet. Family whalers boy named Dhanus maintain it.

Zyba nation is a nation that can live on land and in water, so Dhanus can easily play around the bottom of the ocean. Once when diving in the ocean floor, a person claiming to be from Zyba help of a giant octopus attacks. The man was shot dead by divers. Earlier he gave the belt to Dhanus rainbow rays. This belt is a weapon Aquanus. Aquanus name comes from Aqua meaning water, and Nus of Dhanus. 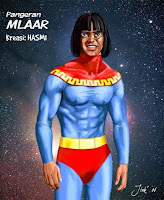 Prince Mlaar is Hasmi comic creation. Crown Mlaar is a kingdom on the planet Covox. After the killing of the father by the plotters Mlaar Telern Minister and Head of the Silver Princess, Mlaar taken by his uncle who was a genius scientist. Thanks a fabrication by his uncle, Mlaar have the ability that could make him stretchy elastic within certain limits.

Caroq Indonesia is a superhero character Thoriq Ahmad works. Caroq was created in 1992. His real name is Ongko who works as a taxi driver. He has the magical power to transform himself into a superhero. Caroq have 2 long powerful blade sickles. Nemesis is The Hand of Four and The Shark. 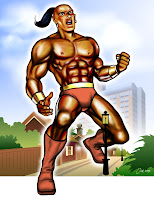 Jin Kartubi is Hasmi comic creation in 1968. Kartubi is a giant genie servant Maza. If Maza need it, he lived rubbing dagger. Kartubi will soon come up with a guffaw.

Kartubi country is actually a prince in the royal jinn called Mbegadud. His father is the king Mansuk Lezus. His brothers are evil put it into a bottle and throw it away. He entered the dreams sunflower (Maza alter ego) that he would serve him and into the dagger. Being a giant Kartubi often used Maza in the face of threats such as giant Xephros-stealth and stealth giant ghost island. His ability to fly extremely exploited the superhero who can not fly for air transport.

Bat or Calong is Hasmi comic creation. First appeared in 1972 in Calong Son Bats. Agus Supriyadi hiding in a crate so he could join the group an archaeological expedition to the mountains Dieng led by his father. Agus, who really should not be joined by his parents forced to stay around the tent with an employee of his father. A Isman other men involved in the plot to extort him. Realizing the danger of people who then chased, Agus ran and plunged into a ravine and blacked out.

Agus, who woke up from fainting lost up to a cave. In the cave filled with bats, Agus met with the human race from the kingdom of Laksa Bantala bat at the end of the cave. Xamfereet king named him a magical object which, when placed on the forehead would turn it into a little superhero called Kalong. Bat then frustrate blackmail his father's men. Bats can fly like a bat, invulnerable weapons. Fingertip can emit light of understanding. If the beam was applied to the animal, then the animal can understand and speak to has been truthful. 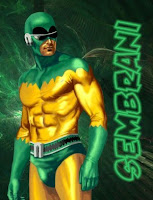 Pegasus is a comic book character created by Hasmi. First appeared in serial Gundala 1000 Swordsman 1974. Tough was at the edge of the crater at Dieng toxic gases, when there was something that attracted him down into the crater. A spacecraft has apparently fallen into the crater. The presence of the object seems to neutralize the poison gas.

Through 3-D projection, Otohrb, a warlord who has long been dead in fighting in the star system Ristuty talk to him. He gave Tangguh a necklace that can turn it into a superhero named Sembrani. Pegasus has the ability to neutralize the magnetic field and electric field, neutralizes toxins and can fly.

Zantoro come from families that are less harmonious, his sister called Mantoro lived with her mother, while Zantoro live with his father. The father was a merchant and an expert in the manufacture of sharp weapons. Zantoro also inherited his father's ability to make sharp weapons and also an expert in playing it. Zantoro very hate crime, he would be furious if they see a crime in front of him, and not a few petty criminals and high profile successfully arrested by Zantoro.

Sedhah is a journalist who was helping his father who abducted fell into a ravine and was helped by a swarm of pigeons who then took him to the Queen Merpati. Queen Pigeons sedhah enter into a magic potion that makes sedhah has super strength and is known as the "Pigeons."