7 Biggest Whales in the World 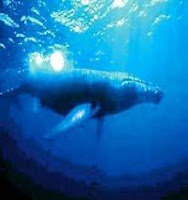 marine mammals that enter into the suborder of baleen whales. Length is more than 33 meters and has a mass of 181 metric tons or more. The animal was believed to be the largest animal ever.

Long and slender, the Blue Whale's body can be various shades of gray kebiruannya. There are at least three distinct subspecies: B. m. musculus North Atlantic and North Pacific, B. m. intermedia, the Southern Ocean and B. m. brevicauda (also known as the Pygmy Blue Whale) found in the Indian Ocean and South Pacific Ocean. B. m. indica was found in the Indian Ocean, may be another subspecies. As with other baleen whales, the staple diet contains small crustaceans known as krill, which is as good as small fish and squid.

Blue Whales were abundant in nearly all oceans until well into the 20th century. For over 40 years the whales were hunted almost to extinction by whaling until protected by the international community in 1966. A 2002 report estimated there were 5,000 to 12,000 Blue Whales worldwide located in at least five groups.

Most of the current research draws attention to the subspecies of the Pygmy Blue Whale possible under perkiraan.Sebelum whaling, the largest population was in the Antarctic, numbering approximately 239,000 (202,000 to 311,000). [8] The rest is only a small portion (approximately 2,000) concentrate in each group northeastern Pacific, Antarctic, and Indian Ocean. There are two more groups in the North Atlantic Ocean and at least two in the Southern Hemisphere.

Bowhead whales are the second largest whale after the blue whale (although most experts mengangggap fin whale is the second largest). These whales have baleen, amounting to 350 pairs with silver feathers hanging from the jaw. Whale habitat can only be found in the Arctic and Arctic oceans because the whale's body adaptation of this type of fat has a protective shell of thick up to 30 cm thick at the bottom of the skin.

Having a big head up 1/3 of total body length. This whale has a mouth with a length of 4.9 m, 3.7 m high and 2.4 m wide with a tongue weight of nearly 1 ton. Triangular head shape and has a bulge on the nose which is called the stack which serves as adaptations to break the ice when they want to the surface to breathe. Stack can crush ice 30-60 cm thick. Bluish color black & white on the lower jaw. White color will multiply as you age. Tail width of about 7.6 m and 1.8 m pjg fins.

Long adult whale can reach 20 m for females and males about 16-18 m with a maximum weight can reach 120 tonnes (some experts estimate that only 60-70 tons, is that a sequence difference heaviest whales). The food is different types of plankton and small udang2 with daily consumption of about 1800 kg. KEC cruising around 3-12 km / h. Sexual maturity at the age of 15-20 years old with a birth interval of 3-4 years old once. Gestational age 12-14 bl. Newborn child length is about 4.5 m dg weighing 1 ton and the first to reach 1 yr 9 m pjg her. Her life span can reach 60-70 years. Species surviving estimated about 25000 head again on earth. Hunting is done for oil and bone taken gills. Bowhead an adult could produce 100 barrels of oil and 750 kg of baleen.

Including baleen whales have such Bowhead whales and whale Abu. Pisiknya shape almost like Bowhead whales. Her skin color was black except for a white belly. His body was plastered by many similar cyamids whale lice. This whale has no dorsal (dorsal fin).

These whales can reach a length of 18 m with a weight of between 60-80 tonnes. Greatest species ever known to reach 18.3 m and weighs 106 tons. The food is the same as other whales krill are shrimp and copepods. Sexual maturity is when the whales reach lengths of between 10-12 m and 12-13 m females at the age of 5 years old and females 6-10 years old. New-born child's weight about 1 ton dg dg 4-6 m long gestation 12 bl. Minimum life can reach 70 years old.

The most interesting part of this type of whale is his testicles because these whales likely testes greatest among all creatures that weigh each 500 kg (0.5 tons). Total population is currently estimated to be around 7000 head (1998) of 3 different types. Her death affected a lot due to ship propellers as pelabuhan2 in America and also often bound by ropes fishing nets that trap jaw when opening mouth for absorbing plankton in addition for deliberately hunted. Pope this type is the most rare among his other major types of whales.

Pope physical characteristics of this type of long and slender shape (like a blue whale) with abu2 brownish color. There are two subspecies, namely the Northern fin whale habitat in the North Atlantic and that larger Antarctic fin whales in the Southern Ocean. Pope food is small fish, krill, and other plankton cumi2. In a day can eat up to 2000 kg of food. Later estimated 3000 remaining tail. 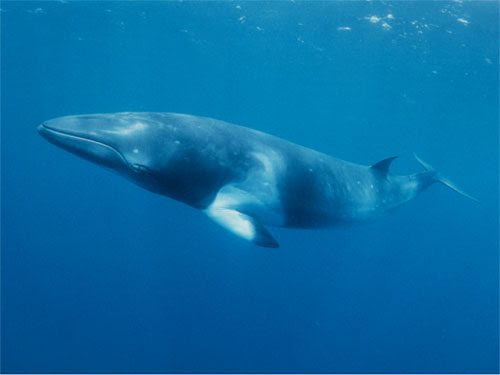 Size This fin whale can reach 27 m in length weighing an estimated 70 tons. But rata2 length adult fin whales around 24-25 m. Lifespan could reach the age between 25-30 years old but it could be more. Her newborn weighs about 1.8 tons dg length of 6.5 m. Mother gave birth after pregnancy and breast feeding for 8-12 months until the age of 7-8 months her when her son reaches 11-12 m long. Parent Fin Whale is about 2-3 years old can get pregnant once and her sexual maturity begins at age 3-12 years old. Diving capability can be up to a depth of 500 m, and the time between dives 10-15 minutes. Swim speed can reach 37 km / h.