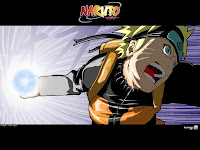 Rasengan (Indonesian: "lap spiral") is one of ninjutsu elite level A. Created by the Fourth Hokage / Minato Namikaze after three years of the manufacturing process. This technique does not require hand seals but good chakra control of the user. Rasengan destroying anything about it and make the injury worse.

Level of chakra control required is very high because the teaching of these techniques is made in three stages. The first stage is Phase Rotation, trained by turning the water in a water balloon until the balloon burst. The second stage is Phase Power, trained by solving a rubber ball. The third stage is the Phase Control, trained by combining the first and second phase so as to form a perfectly round and solid.

The fourth Hokage taught Rasengan Jiraiya Jiraiya and later taught it to Naruto Uzumaki. Rasengan is an example of a high level of chakra manipulation. In addition, the Fourth Hokage died before refine the type of chakra itself while Kakashi failed perfecting this stance with its own chakra manipulation. In the PS2 game console, "Naruto Narutimate Accel", Jiraiya can refine Rasengan with the chakra type of fire. In Naruto Naruto managed menyempurnakanya Shippudeen be a berlemen Rasen Shuriken wind. 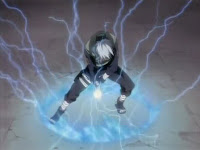 Raikiri or lightning blade is the step that concentrates chakra at the tip of the hand. This stance in high speed can cut anything because it can be an effective killer stance.

Raikiri is S rank ninjutsu because it is so extreme and capable of splitting kakashi lightning with this jutsu, Sasuke Uchiha, the only other people can do this jutsu, is still only at the rank of A, so he still called it Chidori.

Chidori or "bird chirp 1000" is a fictional moment in the series Naruto created by Kakashi when he was promoted to Jonin but her teacher is Konoha no Senkou kiiroi father is none other than Naruto Yondaime forbidden to use these tactics because it was considered too dangerous for yourself and then he taught This jutsu on Sasuke and is now used by Hatake Kakashi and Sasuke Uchiha.

This jutsu requires a lot of chakra on the user's arm. This stance changing user base chakra into electricity. This stance raises a noise like birds (such as the origin of his name), because the process of changing chakra, the user velocity and amount of chakra the band is used. Once the technique is completed, the user ran straight ahead and stab the opponent with chidori. The amount of thrust and resulting disc users can pierce almost any object until translucent. Therefore, this stance also called killer jutsu because of its speed and virulence.

Kage Mane no Jutsu is a Ninjutsu technique developed by the Nara clan. Kick It uses shadows as a weapon to knock the opponent. This stance affected opponent can not move and can only follow the movements that use these tactics. but the moment it has the disadvantage that the opponent is trapped stance duration is how long the user has chakra to continue to lock the opponent so if the user moves run out of chakra then this moment will be menggilang. 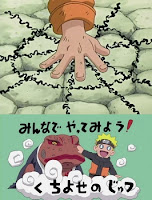 powerful jutsu, which is where a person or a group of ninja may allow to summon animals, objects and the dead to fight on their opponents after making a contract with a species of animals or objects, even people who have died. greater chakra and jutsu is owned, the bigger and stronger it is the animal is raised. when contracting with an animal, it is also able to call binatng users.

To call a creature that is needed is bleeding from the hand and then do the necessary hand seals and then put their hands to the ground or other objects. but There are also variations to the summoning steps, some ninja like Temari will affix his blood to his fans, then swung it. was also subordinate to Orochimaru's ninjas to call by putting their blood at delivery orochimaru snake tattoo and then put his hand to the ground. 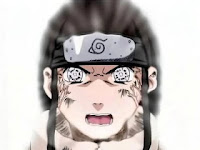 Owner Byakugan is the Hyuuga family anggotan. They have white eyes and black pupils are only visible when they use the Byakugan. aat using Byakugan, pupils and they look around their eye muscles tighten. Their owners can see a 360 degree radius, except at the nape. 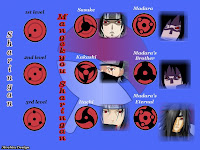 Owner Sharingan is Uchiha family members, except Hatake Kakashi, who owned kakashi sharingan obtained from the owner of the first sharingan friend who was killed in battle manghadapu ninja from the village of Iwagakure, Sharingan can mimic moves correctly, as far as stance is in line with the ability of the owner of the Sharingan . Sharingan owners can also make or deflect Genjutsu dimension.