✖
Home 7Top Ranking 7 Scorpions Most Dangerous in the World

7 Scorpions Most Dangerous in the World 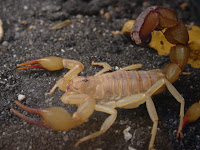 Be careful after the rain ended, the rain is not dangerous, but the animals that used to appear after the rain after it is dangerous. It could even lead to death, we are grateful for the kind of country that caused the death was not found although it is still considered dangerous. Here he scorpion, scorpion, known to people in Britain and the United States. EsCampur88, frequently meet one type of animal that has a pair of clamps around and in the house, after the rain ended. Here are the most dangerous type of scorpion in the world. 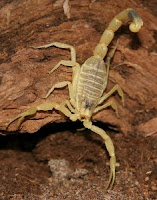 deathstalker known as a species that has the most deadly poison venom is a mixture of various powerful neurotoxin venom (a neurotoxin dah hell do not know but it seems hazards) that can cause severe pain is unbearable, then fever, followed by coma, convulsions, paralysis and death. Fortunately, for healthy adult humans, although painful, but it can not kill. Young children, the elderly and infirm individuals (eg weak heart) are at high-risk group of death if stung by this scorpion.

fat-tailed scorpion or Androctonus is one of the most poisonous species of scorpions in the world. name aj "Androctonus" which means man-killer. Among all species Androctonus perhaps the most dangerous is the Arabian Fat-tailed Scorpion, the poison she had to compete with poison deathstalker. toxic species have also consists of neurotoxin. This species is responsible for the deaths of several people Ans each year. There is still a debate who the most deadly scorpions, whether deathstalker or Arabian Fat-tailed

according to the type species "Androctonus", yellow fat-tailed is a kind of a very deadly, although it is not as strong poison deathstalker or Arabian fat-tailed, fat-tailed yellow poison could kill someone in 2 hours, if not immediately given serum (not thdp affect a healthy adult). serum is also not easy to obtain, even in the U.S. it is very difficult to obtain serum 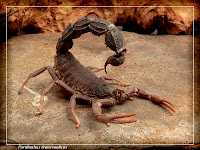 skipper ad yg tau knp monotype is dubbed Black Spitting Thicktail Scorpion?? This is because they can shoot their venom like a cobra. semburkan poison they can get within 1 meter, and when exposed to the eye can cause a very painful feeling and temporary blindness, but it can be permanent blindness if not promptly cleaned of toxins, ability is what makes the species which he regarded as harmless enough, but the levels toxicity is not considered lethal. so even though this type of poison owned anak2 and dangerous for people who are allergic to this poison.

Unlike many other scorpions, types are also easily found around the habitat. but due to its proximity with humans, this type (although not aggressive) quite often detrimental to humans. sting is very painful. for a couple of people can occur for 15-20 minutes and rarely up to 2-3 days. but this type rarely causing death, some reports suggest that this type responsible for the deaths of several people Ans but it's all still being debated.

He is very similar to the emperor scorpion, but it is totally different. Asian forest is a kind of a very aggressive and are quite defensive and often feel threatened so often seen to be in a position to strike. Different with scorpions jenis2 above, when threatened Asian forest rarely uses its tail sting, they are more often attacked by using the claws large enough to make us bleed poison Asian forest owned by non-lethal (said to be only as strong as the sting of a wasp) probably because he was more rely on a powerful claws