Please Share this article is useful !
Prabowo was born with a full name Prabowo Djojohadikusumo, he has a wealth of experience in areas such as Military, Entrepreneurs and World Politics that he struggled lately. In the upcoming 2014 election he carried by Gerindra (Great Indonesia Movement) to advance to the Republic of Indonesia Presidential Candidate in 2014 after failing in the 2009 election and 2004. much controversy in addressed to Prabowo during his military career. Prabowo was born on October 17, 1951, Prabowo was the daughter of Indonesia's Economic experts at the time of Sukarno and Suharto, Prof. Soemitro Djojohadikusumo, Prabowo is also the grandson of the founder of Bank Indonesia as well as to the independence of Indonesia BPUPKI members are Raden Mas Margono Djojohadikusumo.

Judging from family Prabowo has two older sisters named Bintianingsih and Mayrani Ekowati, and one younger brother who is now a powerful businessman named Hashim Djojohadikusumo. In 1970, Prabowo began his career when he enlisted in Magelang Military Academy, he later graduated in 1974 from the Military Academy, and in 1976 was assigned as a Platoon Commander Prabowo The Command Group I Yudha Sandhi Forces (Special Forces) and was assigned as part of the operations team in East Timor Nanggala.

Prabowo Titiek who later married the son of President Suharto. Marriage Prabowo with Titiek ended shortly after Suharto resigned as the President of the Republic of Indonesia. From marriage to Titiek, Prabowo had a child, Didiet Prabowo. Didiet grew up in Boston and now lives in Paris, France as a designer. After returning from East Timor, Prabowo continued his military career skyrocketed. In 1983, Prabowo trusted as Deputy Commander Detachment 81 Counter Terrorist (Gultor) Army Special Forces Command (Kopassus). Upon completion of the training "Special Forces Officer Course" in Fort Benning, USA, Prabowo was given responsibility as Commander of the Airborne Infantry Battalion. 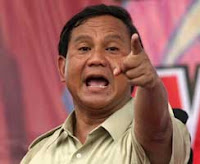 Much controversy and allegations of human rights violations committed by Prabowo when he pursue a career in the Military, in 1983, at that time still rank Captain, Prabowo allegedly tried to kidnap a high-ranking military efforts, including General LB Moerdani, but the effort was reportedly thwarted by Major Luhut Panjaitan, Commander Den 81/Antiteror. Prabowo himself is representative Luhut time. In the 1990s, Prabowo allegedly linked to several cases of human rights violations in East Timor. In 1995, he allegedly illegal move troops staged terror to civilians. This event makes Prabowo almost scuffled with Military Commander of East Timor at the time, Col. Inf Sjahnakrie Kiki, in the office of Commander IX. A number of international organizations demanding that the case is resolved. According to Adnan quoted legal experts, the case is not finished yet because it has not been legally held by criminal law examination.

In 1997, Prabowo was accused of masterminding the abduction and disappearance of a number of pro-reform activists. At least 13 people, including the artists 'People's Theatre' Widji Thukul, activist Herman Hendrawan, and Peter Bima lost and undiscovered until now. They are believed to have died. Prabowo ordered Tim Rose admits to kidnapping the nine activists, including Haryanto Taslam, Desmond J Mahesa and Pius Lustrilanang.

However, Prabowo has not been tried for the case even though some members of Team Rose was sent to prison. Some kidnapping victims and their families have not forgiven Prabowo 1998 and is still continuing legal efforts. Some seek for justice by holding action 'silent black kamisan' silent demonstration in front of the Presidential Palace every Thursday. Some premises have joined the management of the Great Indonesia Movement Party, even sitting in the House of Representatives. Haryanto Taslam who has been a member of the Board of Trustees Gerindra says "Prabowo had apologized to me. He also invited me to join to build this country. Prabowo and I am a victim is a victim of political Prabowo time. He also victims. Prabowo only an army who obey his superiors. idea abduction instead of Prabowo. then New Order regime was repressive. If Prabowo not sure anyone else who will be asked to kidnap. "

Prabowo was also suspected of masterminding the riots in May 1998 based on the findings of the Joint Fact Finding Team. Alleged motive was to discredit his rival Commander Wiranto, to attack ethnic minorities, and to get sympathy and authority over Soeharto when later he was able to quell the unrest. Also in May 1998, according to the testimony of President Habibie and retired Sintong, Prabowo did insubordinasi and trying to move troops to Habibie in Jakarta and around the residence for a coup. Because these insubordinasi he was dismissed from his position as Commander of the Army Strategic Reserve Command by Habibie, Wiranto above instructions. The main problem is that the actual testimony Habibie, the troops guarding his house is on the order of Wiranto, Prabowo not. At the command briefing on May 14, 1998, directing the Armed Forces Kopassus commander guarding houses the president and vice president. These commands are confirmed in writing on May 17, 1998 to senior commanders, including Sjafrie, Commander Jaya at that time. Prabowo was sure he could have staged a coup in the days of rioting in the month of May. But it's important to him he did not.

"The decision to fire me was legitimate," he said. "I know, many of the soldiers I will do what I command. But I do not want them to die fighting for my position. I would like to point out that I put the good of my country and the people above my own position. I was a loyal soldier. Faithful to country, loyal to the republic "

After stopping a career of military World, Prabowo then started his luck being an entrepreneur is to follow his brother Hashim Djojohadikusumo. Prabowo career as an entrepreneur began by purchasing the Kiani Paper Paper Company, a paper mill management company located in Mangkajang, East Kalimantan, Kiani Paper previously owned by Bob Hasan, a businessman close to President Suharto. Prabowo buy Kiani Paper using loans worth Rp. 1.8 trillion from Bank Mandiri. In addition to managing paper Kiani, whose name was changed by Prabowo a Paper Archipelago, a group of companies owned by the Nusantara Group Prabowo also controls 27 companies at home and abroad. Businesses owned by Prabowo engaged in plantation, mining, palm oil, and coal.

Many people judge, Prabowo was quite successful in the attempt. In the 2009 Presidential election, vice presidential candidate Prabowo is the richest, with total assets of Rp 1.579 trillion and U.S. $ 7.57 million, including 84 special horses are most worth about 3 billion per fish and a number of luxury cars such as the BMW 750Li and Mercedes Benz E300. His wealth is multiplied 160 times the amount of wealth he reported in 2003. At that time he only reported fortune of 10.153 billion