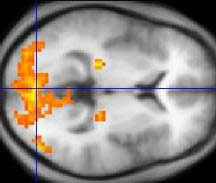 Intel scientists were mapping the brain activity when people think of certain words, by measuring the activity at about 20,000 locations in the brain. The tools used to do the mapping now is Magnetic Resonance Imaging scanner is expensive, the same as used in hospitals, but the senior researcher in Intel's Dean Pomerlau said that smaller equipment to be worn on the head is being developed. Having mapped the brain activity of a computer will be able to determine what word you are thinking by identifying brain patterns are the same and the differences between them.

A prototype was able to function, it can detect words like house, screwdrivers and barns, but with the development of more sophisticated brain scanning, the ability of computers to understand the mind will increase.

If the plan is successful, users can surf the Internet, write e-mail and conduct its activities in a computer just by thinking about it. Justin Ratner, director of Intel Laboratories said that it is clear that humans are no longer limited by the use of a keyboard / mouse and a keyboard / mouse, and a mind-reading is the best user interface. He said that he believes the problems can be overcome privacy concerns.

People normal computer users may be reluctant to adopt technologies that operate a computer by reading their minds, but on the other hand, those who can not use a keyboard or a mouse because of disability should have known that this new technology gives them more freedom and opportunity to communicate .