✖
Home Reference and Education The Secret Behind Fingerprint

The Secret Behind Fingerprint 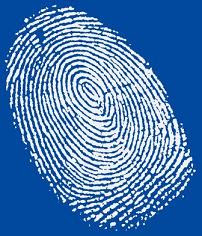 Fingerprints are personal identity can not exist like it. If you live in this world 6 billion people, there are 6 billion of existing fingerprint pattern and have not found someone who has the same fingerprint with others. Because of its uniqueness, the fingerprints used by police in the investigation of a crime (forensic). So in the event of a crime, the scene will be cleared up and is prohibited for anyone to get in because it was feared would damage the criminal fingerprint that may be left on the evidence at the crime scene.

Uniquely, fingerprints can also be used as a guide to identify how the potential of a person, so we can know the actual or potential talent so that we can accommodate our potential for what kind of job is best suited to our talents are. Identification method can be done by naked eye with the experts in the field, or there is also the use of a special tool fingerprint reader (finger print reader) connected to a computer which then analyzes bersoftware special based on the points of reference. As for who can be identified are the one's control logic, reflexes and brain development. About the shape and the fingerprint pattern consists of three types above have the typical characteristics are:

Whorl (circle) is the principal form of fingerprints, has two deltas and at least one circular line in the pattern area, walked in front of the two delta. Type whorl consists of Plain whorl, Central pocket loop whorl, double loop whorl and Accidental whorl.

Loop is the principal form of fingerprints in which one or more lines coming from one side of the painting, ramp, touching or crossing an imaginary line drawn between the delta and the core, to stop or tend to stop in the direction of the original. 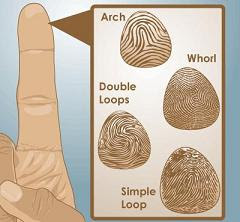 
FT (fingerprint test) aka fingerprint reading test is a method based on dermatoglyphic, science hundreds of years old. FT is the genetic blueprint.


Dermatoglyphic from the Greek, meaning charity skins and carved glyphs that science is based on the theory of epidermal or ridge skill (lines on the surface of the skin, fingers, palms, feet up). Dermatoglyphic have a strong science base as supported research since 300 years ago.


The researchers found the epidermal ridge had a scientific relationship with the genetic code of the brain cells and the potential of a person's intelligence. The study started by Govard Bidloo in 1685. Then, successively conducted by Marcello Malpighi (1686), JCA Mayer (1788), John E. Purkinje (1823), Dr. Henry Faulds (1880), Francis Galton (1892), Harris Hawthorne Wilder (1897) and Noel Jaquin (1958).


Beryl B. Hutchinson in 1967 wrote the book Your Life in Your Hands, a book about hand analysis. Finally, the results of studies Beverly C. Jaegers (1974), fingerprint characteristics and reflected in a person's psychology. Their results have been demonstrated in the field of anthropology and health.


To check your intelligence through fingerprints, palms originally photographed with a camera connected to the screen. Furthermore, the ten fingers scanned on a device resembling a computer mouse. The way is to put each finger in turn. At that moment, you have ten fingerprints recorded in a computer. Later, a FT analyst will analyze it. The results of a detailed analysis can only be given 5 days later, pending the results of laboratory analysis in Singapore. In Indonesia there is not a special laboratory for this FT.


When the full results of the fingerprint records given to patients, a team of psychologists ready to explain its meaning. For more information, describe the vision pinkie finger. Ring finger symbolizes the hearing. The middle finger touch by touch, balance, movement and coordination of the hands and feet. Index finger as the process information (left hand for logic, right hand to mind). Thumb to think and make decisions.