Please Share this article is useful !
1.Mike, the Headless Chicken: (Life 18 months without a head) 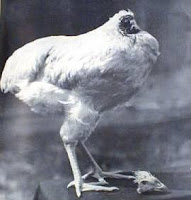 Mike (April 1945 - March 1947) the headless chicken is a Wyandotte rooster that can live for 18 months after his head was cut. After many people who assumed as mere HOAX, the chicken was taken by its owner to the University of Utah in Salt Lake City to establish its authenticity.

On the day Monday, September 10, 1945, farmer Lloyd Olsen origin of Fruita, Colorado, about to prepare dinner and ordered by his wife find a chicken. That's when Olsen decapitated chickens aged 5 and a half month old named Mike. Olsen escaped the ax in use dr neck veins, so that most of the vessels of the brain intact. Mike had entered in dozens of newspapers and magazines, including Time and Life Magazines. Olsen drew criticism from some quarters for keeping the headless chicken alive. In March 1947, at a motel in Phoenix, Mike tiba2 choked and died in the middle of the night.

2.Oscar, the cat: (Able Guessing that Patient Deaths to Come)

Oscar is a kitten 3 storey rehabilitation center in Providence, Rhode Island.Tempat care for people with Alzheimer's, Parkinson's, and other diseases in which the patient can see him dying anytime in the bs that is not specified.

After about 6 months, the staff began to realize there are irregularities in the oscar. Oscar walked into the room that he would then begin to sniff and observe patients-ngendus and then sleep near the patient. The surprise of the nurses there are patients who in toward Oscars definitely die within 2-4 hours after his arrival.

One of the first incident involved a patient who had some sort of blood clots in the legs nya.Oscar came and put his body on the patient's leg and remained there until the patient died a few hours later. There was another incident in which a doctor has determined the time of death of a patient based on the patient's condition. Oscar predictions prove that the doctor is 10 hours too early. Because so Oscar visited his patient died 2 hours later and be amazed doctors cm.

Oscar's accuracy that has been proven in 25 of his final events in trust by the chief of staff to create an unusual protocol and may be hard to believe. Every Oscar was found sleeping with a patient, staff will contact the patient's family members to tell about the impending death.

The ability to predict the Oscar last jam2 human life is confusing many people and described by Dr.David Doza that Oscar is a cat who does not want to hang on the living. One example that was written in the NEJM article. When there was an elderly female patient who was accompanied by Oscar, Oscar doctor told to get out and Oscar hissing sound like a rattlesnake that seemed to say "Leave I Alone".

3.Tillamook Cheddar, the dog: (Animals Painter Most Successful in the World)

Tillamook Cheddar is a dog Terrier from Brooklyn, New York. He is known worldwide as the most excellent artists from the world of fauna, he had 17 solo exhibitions in the U.S. and this Eropa.Saat Tillie was 8 years old.

In July 2005 the artist gave birth to six healthy puppies. One of his sons, Doc Chinook Strongheart Cheddar looks to continue his mother's footsteps. But until now have not paint Doc, he's only in use for a model photo shoot by various magazines.

4.Alex, the parrot: (smartest Bird In The World)

Alex is a parrot gray who became the subject of an experiment by animal psychologist Irene Pepperberg observers. Pepperberg bought Alex in a pet store when alex 1 year old. Alex own name actually stands for Avian Learning Experiment.

Before Pepperberg's work with Alex, the world believed that the bird is not intelligent creature. But Alex managed to show the world that the birds can understand human communication and understand the basic message stating that the level of intelligence nya.Pepperberg Alex par with the dolphins or apes. He also stated that Alex has the equivalent of human intelligence that was 5 years old, although not able to reach his full potential because he died in the age that young. He can count, distinguish colors, and showed his worth ekspresi2 frustrated people.

Alex's death comes as a surprise, because the long life of rata2 African parrot is 50 years old. She looks healthy the day before he died, and suddenly found dead the next morning. Based on Alex Foundation in a press statement, "Alex in good health without any physical abnormalities during the last 2 weeks before his death. Become mysterious death because after the autopsy the cause of death remains unknown bird. Labs are then tested other birds, but their ability no one approached Alex even now.

5.Oliver, the "Humanzee": a human-chimp hybrid

Oliver found by Frank and Janet Berger in early 1970 at the age of about 2 years. Some observers behavioral and physical beast then convince Berger that Oliver is another animal dr chimp, perhaps the human-chimp hybrid (a combination of human and ape) Oliver has a face that is more flat than the other chimpanzees friends.

Her front teeth were dug up when he was young and never grow fangs in his gear collection. Oliver never walked with his fist up and running but its decent human being.

The most surprising after her is that Oliver prefers human females dibaningkan females. During the special coverage by Discovery Chanel, Janet Berger stated that Oliver had fallen in love with her when she turned 16. Oliver Berger climb and try to mate with her.

Because of his behavior that Oliver is considered a threat to Janet, so it was decided to move the Oliver. Some people admit he did not have a common characteristic odor such as chimpanzees and that's what made other chimps away from him.

6. Owen and Mzee: The uniqueness of the Friendship Association of Two Species

A day after the devastating Indian Ocean tsunami tragedy that hit Asia and Africa, dozens of villagers shore of Malindi in Kenya perform rescue duties with local authorities. It was then that Owen Saubion odd sight on the waterfront. He saw the baby hippos (1-year-old) was curled limply on the rocks. His condition is very alarming. He was caught between the waves and the swift water of the Sabaki River estuary.

Once treated, hippos was finally taken to the Haller Park near Mombasa, a wildlife park owned by Lafarge Eco Systems' East African firm, on December 27, 2006. In Haller Park wildlife sanctuary is a unique story of friendship that dimulai.Bayi hippos were later named Owen, suitably named savior.

Asylum officers put him in an area for small animals. This step is done because Owen is still quite a baby. Meanwhile, if placed in a location to herd hippos, veterinary nurses officers feared he would diserangan herd of other hippos do not know him. Since hippos are very aggressive and "fanatical" in his flock, when their foreign hippos could have killed him.

When Owen is released, he was still confused. Probably because they have to occupy a new environment. But after she felt a little uncomfortable, Owen directly at and interested in a tortoise named Mzee. Mzee, is a species of turtle Aldabran 130 years old weighing 700 pounds (320 kg). Mzee which in Swahili (African) meaning "wise old man" (wise old man), an old inhabitant area is equipped with a beautiful pool and artificial forests.

7. Anjing Suicide After Being hit Employer

BEIJING-A Dog "Mastiff" Tibet in Hangzhou, capital of Zhejiang Province, biting her tongue and had died after being beaten by her employer. The owner, who was surnamed Pan, beat the dogs for fighting with other dogs, with the aim of giving the dog a lesson.

"I feel very sorry," Pan said after the incident. "My friend who has kept the Tibetan mastiff dogs for 20 years tells me that the animal is the king of all dogs and have a sense of pride is very strong." "If you beat a dog mastiff in the presence of other dogs, the animal was embarrassed and would be suicide to maintain his dignity," jg katanya.Kasian animals really have pride.