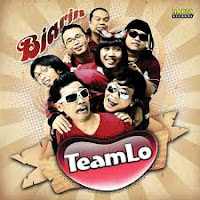 Teamlo or Team-lo (short for Team Solo Humor) is a band from Solo that combines music and comedy. This name is a play on timlo, typical food of Solo.

Along with the development time, is no longer teamlo of 6 people, leaving two personnel teamlo now been replaced with 3 new personnel, so teamlo now consists of 7 people.

Here are 7 face Teamlo in History

The band was formed in 1997, with the initial name of this tribe (pleseten from Apache tribe) that combined personnel of March students of the University and the University of Muhammadiyah Solo. Starting from the stage in small stages such as circumcision, 17's, birthdays, etc., they began appearing on television in 2000.

In the middle of the era of the rise of Indonesia buffoonery, the group is indeed a breath of fresh Teamlo. With a face that according to their own potluck, guaranteed audience laughing from beginning to end the show.

According to Henry From the beginning, Teamlo want to be a comedy group that is not just a joke but want to be known as a musical humor. They claimed and realized that they had the look mediocre. can not be determined to be a band that serious. Incidentally in their daily life sense of humor, so it was the music combined with the joke.

As a result, young people are basically looking funny, parodying the songs that are famous, and legendary songs. To be more distinctive in the eyes of the audience again, Teamlo deliberately made their appearance to be unusual. They are also very happy when Benjovi, typical faces of their friends, join them. Benjo Teamlo it's a mascot, because of her caricature.

Not only that. They also deliberately change their original name, with a funny pseudonym. like Henry Bakwan, Bobby Meshach, Benjovi, Dumplings Anjasmara, Avis Sukaesih, and Ndondot bloating. Because all unique and kelucuannya, they often get calls from the stage. Starting from performing at campus events, and then increased to outside events, including the invitation of the government agencies. Even starting in 2000, they got an offer to appear on a television station in Jakarta.

Appearing before a handful of spectators were, they had suffered. When in a seminar, Teamlo gets performed at the end of the show. The purpose of the committee, their appearance to entertain the audience. But it turns out strategy is not appropriate committee. The participants of the seminar was kelelalan, and lazy watching comedy. Finally Teamlo look-out in front of the remaining five participants.

Jokes Teamlo also vary, as backgrounds of students, they are able to present an intellectual joke ala Bagito, to slap-stick jokes ala Srimulat. They still wear the old pattern, one that sacrificed their personnel. The audience delighted when people are persecuted ugly on stage. With frequent appearances on television, they are also venturing into parody soap operas, movies, commercials or TV shows. One of the events that had parodied is the Other.

As a group of music, including works Teamlo type parody or pun. Previously there were some groups who popularized this genre like Warkop, Arc of Light torches (PSP), OM Introduction Drinking Poison, and Project Pop. Their expertise in playing musical instruments also received a lot of praise, they often perform solo bass, drums and guitar.

Even one of their lead singer, Henry Bakwan, had listed his name on the MURI for its ability to mimic the style of 23 different singer. Their names are getting bounced in 2003, when they guest starred on the show at the television station TPI API. But in 2009, Ade, Kudil, Jimmy joined Argo Teamlo to fill the void left by vocalist Teamlo after dumplings and Benjo.