Loetoeng Kasaroeng Indonesia is a film in 1926. Although it is produced and directed by Dutch filmmaker, this film was the first movie released commercially that involve Indonesian actor.

The company that produced the movie South Sea Film and made a month
June 1928. Tells the story of a girl who was engaged parents when
he already had his own choices. First created by Len H. Roos,
an American who was in Indonesia for Java on the film.
When she returned, followed by Nelson Wong in collaboration
by David Wong, a key employee of General Motors in enterprise IT
Batavia with an interest in art, film forming Hatimoen. On
Ultimately, the film Lily van Java taken over by Halimoen. By
Leopold reporters Gan, the film remained popular for many years
until the film is broken. Lily van Java is the first Chinese movie
made in Indonesia. 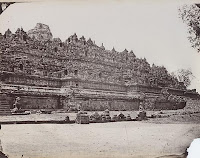 The film is produced by Nancing Film Co., starring Olive
Young, a silent film that tells the story of a young pei fen
find a book Resia (secret) tells his father's
about a famous temple (Borobudur). Narrated also in
the temple there is a treasure of inestimable value, ie
urn containing the ashes of the Buddha Gautama.

This film comes from an essay G. Francis in 1896 that
taken from a true story, the story of a mistress, Nyai (housekeeper)
Dasima happened in Tangerang and Batavia / Batavia happens
circa 1813-1820's. Nyai Dasima, a girl who came
of Kuripan, Bogor, West Java. He became the mistress of a man
Englishman named Edward William. Therefore,
eventually he moved to Batavia / Batavia. Because of the beauty and
wealth, Dasima became famous. one fan weighs
Samiun so excited having Nyai Dasima persuade Mak
Nyai Dasima pitcher to persuade to accept his love. Mother
Dasima pitcher persuaded though Samiun married. To
finally Nyai Dasima wasted Samiun after successfully made the young wife.

This film disutradaria by Lie and A. Tek Swie LOEPIAS (Director of
Photography), and starring Bachtiar Efendy & Momo. The film is
tells the story of a hero who fights to contain
elements of Chinese culture.

Indonesia's first silent movie, the film tells the story of
relations between ethnic Chinese and indigenous. In the film, The Teng Chun
acting as a director and the camera. This story was fabricated by Kwee
Tek Hoay and Dalia Union had staged Opera in 1927, although
only a summary of the story, that is about the Indo-Tiongha. And this movie
reported by the authors made Java the Chinese film is the work of
Indo-Tiongha.

Blood and Indonesia Prayer is a film that works Usmar Ismail
produced in 1950 and starring Faridah. The film is
Indonesia is the first movie entirely made by residents
natives. This film is the first production of the National Film Company
Indonesia (Perfini), and the film's first shooting date March 30
1950, which was then celebrated as the Day of National Film. The story of the film
This scenario comes from the poet Sitor Situmorang, telling
an Indonesian revolutionaries who fell in love with the wrong
a Dutchman who became his prisoner.