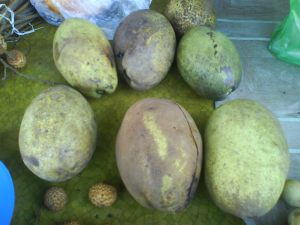 Wanyi fruit is sweet white flesh colored acidic and smelled very sharp. oval fruit such as mango, it was bigger than mangoes. There is a danger of darai wanyi, the tree sap, if we are exposed to the sap effect itching.

Fruit wanyi living in Kalimantan forests, and most are in East Kalimantan, unfortunately the fruit is hard to come across anything else in the area in the city,. Palingan only if any one tree are still alive.

but if in the woods may still encounter many, sangking scarcity of seeds Alhamdulillah I nanama already 1 year old. 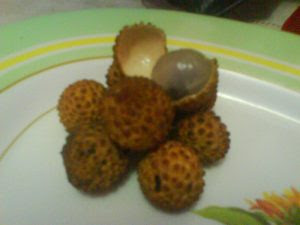 One fruit is known by several names called. Some call Ihau, the Tanjungselor Kabupaen Bulungan called Cat's Eye because of the content of the fruit and seeds like cat eyes shining, while the Dayak Kenyah in West Kutai regency tering called Duku. 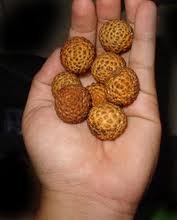 Ihau fruit is a fruit native to East Kalimantan (and perhaps also in the forests of Borneo region include forest Malaysa and Brunei Darussalam). Round shape of a marble with similar Klengkeng flesh with sweet fruit flavors that also resembles Klengkeng. No wonder some people call this city as a fruit native Klengkeng Borneo. Like the trees that grow Borneo jungle, trees ihau have a big trunk and sturdy and tall. Having two kinds of color, the brownish yellow and some are green, making ihau or the cat's eye as the fine cuisine of the monkeys, hornbills and other wildlife. 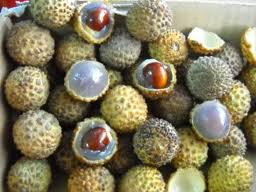 At this time the fruit season (December-February) Ihau pieces can still be found in the market-traditional markets in the interior of the Mahakam. But this time Ihau fruit can also be found at a roadside fruit seller in Samarinda. When asked the origin of the fruit, the seller no longer answer the origin of interior Mahakam memikili dense forests, but the fruit has been dikebunkan ihau by farmers on the outskirts of the city of Samarinda, exactly in the Village District Lempake North Samarinda. If the first person to sell fruit ihau doses of milk cans small size, the fruit is now sold by the dose kilogram ihau like other fruits. The price of a kilo of fruit merchant offered ranges from Rp 15,000 to Rp. 20,000. This price is good enough to compete with imported fruit Klengkeng especially considering the already scarce fruit. 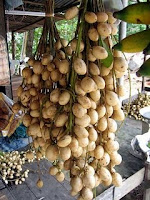 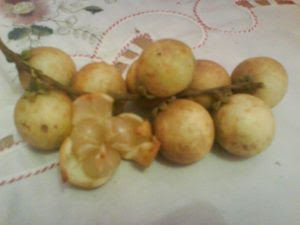 RAMBAI fruit this season once a year. RAMBAI fruit taste sour and sweet, with fruit pie containing 2-4. The fruit is similar to olive / Duku, who membedakanyaRambai spread from Indomalesia to the Western Pacific. Usually the fruit RAMBAI emergence is a sign that the fruit season coming to an end. 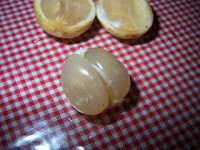 some fruits have kucicipi fruit this time of the season. Actually there are many fruits that have not had a typical inland because it does not feel too much is produced and sold only in certain areas, such as the red durian fruit, and fruit lahong tarap. 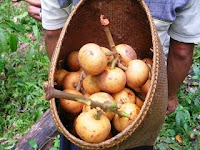 Fruit Kapul it is very similar to the fruit mangis. Only the skin just like bark. Unlike the other is at the end of the piece there is no form of stars, while at the base of the stem there is no crown. The fruit is fleshy Kapul there are two types of white and yellow fleshy kapul.

If any fruit mangosteen consists of five seeds, kapul only consists of four pieces. Flesh color of white. There is also a yellow flesh kapul that. It was? Just taste mangosteen. 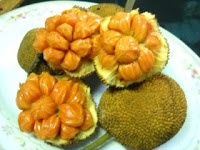 Keledang fruit including fruit rare earth Borneo. The exact shape jackfruit. Demikianpun meat-bu. Just a mini size. keledang is a fruit from forgotten along with the exhaustion of natural forests. The tree can reach 30 feet tall and wide and slightly hairy leaves. Keledang tree can bear fruit since 5 years after planting. Growing up in different types of soil and is generally tropical jungle filled with humus.

Thankfully, when the fruit season this December in Samarinda, many roadside fruit vendors who sell them. Fruit at the hands of adults sold for Rp. 2500 per piece. It's a low price for the fruit that is rarely found this. Tree Preservation Keledang has not received attention, as well as with fruit forests of Kalimantan other exotic fruits. The potential for growth is very easy with propagation through seed sowing.

If jackfruit must be opened with a knife, fruit keledang played enough alone. After playing, the fruit will open. Furthermore, ripe seeds are separated from the orange rind immediately apparent and challenge us to enjoy. It was very delicious. If jackfruit and Cempedak smell, keledang at all. So that those who do not like fruit flavored keledang will surely love.

Tarap fruit similar to breadfruit. Her skin is like rubber, arranged neatly. If we touch, the skin will stick to the palm of the hand, like a lizard legs. Tarap fruit is the source of energy. Because it's very sweet. Soon after we eat, the energy we will soon recover.

How open is to splitting longitudinally tarap fruit. Then the fruit skin will easily peel us. What was left was ripe grains of white ready to enjoy. Unfortunately, the fruit smells like Cempedak tarap spread. So for those who do not like fruit flavored, probably not going to like the fruit tarap.

Fruit bemotong gather at the base of the stem, just above the ground. Fresh red color. But soon turns brown as soon as we have quoted from the tree. Fruit the size of the tip of balpoin being arranged in bunches.

The color purple or white flesh. It was sweet. There is a small seed in the middle. While enjoying, we could just swallow small seeds, such as when we eat mangosteen.