Please Share this article is useful !
Larry Page was Google's co-founder and current President of Google Inc. products. Lawrence E. Page was born in 1973 in Lansing, Michigan from parents Carl Vincent Page, is a professor of computer science at the University of Michigan and Gloria Page, a computer programming teacher at the University of Michigan.

After graduating from East Lansing High School he studied and obtained a Bachelor of Science degree in computer engineering from the University of Michigan and went on to study the Master's program at Stanford University.

While studying at Stanford University, Page introduced to Sergey Brin. The two did not start as a friend, does not seem to agree on most topics of conversation, but finally found a subject that has become very attractive to them. Topics Retrieving information from large data sets. The couple then wrote what is widely regarded as their contribution, a working paper called "The Anatomy of a Large-Scale Hypertextual Web Search Engine".  since they became one of the top ten most accessed scientific paper at Stanford University. 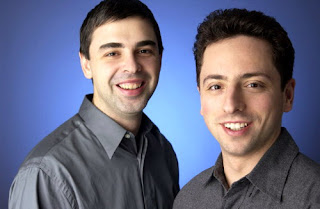 After they began working on a project that became Google's search engine. After unsuccessfully trying to sell the idea, they write business plan and bring the total initial investment of almost $ 1 million to start their own company. September 1998 Google Inc. opened in Menlo Park, California. The company is growing so fast and getting so many employees multiple offices in relocation due to lack of space, Google Inc. finally settled in what is now called the Mountain View, California. Over the next few years google led by Larry and Sergey Google made a lot of innovations and added to the list of products and employees (nearly 5,000 in 2006). October 2004 Google announced their first quarter results as a public company has to offer, with record revenues of $ 805.9 million. In 2005 Page was estimated to have a net worth of U.S. $ 12 billion and be the order of the sixteenth in the list of Forbes magazine and make to the 27th richest person in the world.

In 2002, Larry was named the World Economic Forum Global Leader for Tomorrow. He is a member of the National Advisory Committee (NAC) for the University of Michigan College of Engineering, and together with Co-Founder Sergey Brin, Larry was awarded the Marconi Prize in 2004. He is a trustee director of the X PRIZE, and was elected to the National Academy of Engineering in 2004.