Please Share this article is useful !
Stan Shih or Shi Zhenrong was born on December 8, 1944 in Taiwan. Known as the founder Stan Shih of Acer computer company, he is also the head of the Acer group of companies whose products are well known among the people of Indonesia, ranging from laptops, netbooks, computers, LCDs and others.

He was born in the last days of the Japanese occupation of Taiwan. He was born of a poor family as a result of the population suffers from Japan. Stan Shih is a classic model for the figures in Taiwan. Stan has helped young widowed mother to sell the eggs. The nature independent and entrepreneurial instincts began to take shape from the activities of helping his mother. 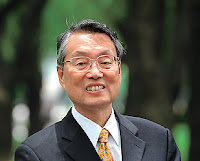 Gradually, she established the company growing rapidly as a leading computer company in Taiwan and will be one of the biggest companies in the world komoputer, then in the mid 1990s, Stan successfully made Acer as one of the top brands in the world in terms of product PC (Personal Computer), which began to compete with the Japanese giants such as NEC and Toshiba, and competitors from Europe and America such as Dell and Hewlett-Packard.

That mencenangkan when his company began to grow rapidly as one of the leading computer companies in the world, Stan chose to retire in 2004. For Part of people, Stan is considered too early retirement at the age of 60 years because in the Chinese culture, a Tionghua will try to continue to work until the condition is no longer able to. Stan did not agree with it and instead wanted to make himself as a role model. A company must be driven by the blood fresh new and powerful

and to keep abreast of the times. Acer company still adheres to the old style that is less aggressive on the ranks of middle-to upper-level managers. Succession of leadership needs to be done to the younger generation.

In the course of his career as a businessman tycoon, famous Stan very concerned about their employees like family own and include them into the distribution of profits. Stanley and his wife own life, including simple, in contrast to the family conglomerates in general. Style and attitude considered as a classical style typical of Taiwan: a relaxed, straight, strong and humorous.

Acer Group that he founded employs 39,000 people in more than 100 countries. His income in 2002 was U.S. $ 12.9 billion. Its headquarters is located in Sijhih City, Taipei County, Taiwan. Acer's North American market has declined in recent years while the European market continues to rise. His success in Europe partly because of the sponsorship of the Ferrari Formula 1 team and former F1 team, Prost Grand Prix.

After that, Acer has now also become the world's most in calculated in PC, Notebook, Laptop and Acer now also been merabah to Articles that focus on smart phones. This is someone who used to perjuanggan ordinary companies now have entered the number 1 company in dunia.Barangkali founder acer passing up and down sales, working hard for acer how it can be calculated in the computer world, and they have enjoyed the results as they are now.