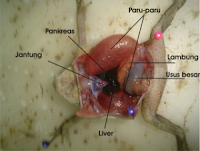 As a member of the class Amphibia, frogs may live some of their adult lives on land, but they must return to water to reproduce. Eggs are laid and fertilized in the water. On the outside of the frog's head are two external nares, or nostrils, two tympani, or ear drum, and two eyes, each of which has three lids. The third lid, called the nictitating membrane, is transparent. In the mouth of two internal nares, or openings into the nose, two vomerine teeth in the roof of the mouth, jaw and two teeth on the side of the mouth. Also in the mouth behind the tongue is the pharynx, or throat.

In the pharynx, there are several openings: one into the esophagus, the tube into which food is swallowed, one into the glottis, where the air enters the larynx, or voice box, and two into the

Eustachian tube, which connects the pharynx to the ear. The digestive system consists of the organs of the digestive tract, or food tube, and digestive glands. Of the esophagus, move food down into the stomach and then into the small intestine. Bile is a digestive juice made by the liver and stored in the gallbladder. Bile flows into a tube called the bile duct, in which the pancreatic juice, digestive juices from the pancreas, also flows. The contents of the general flow of bile duct into the small intestine, where most of the digestion and absorption of food into the bloodstream takes place.

Digested material through the large intestine and then into the cloaca, a common exit of the digestive system, excretory, and reproductive. The respiratory system consists of the nostrils and the larynx, which opens into two lungs, hollow sacs with thin walls. Wall lungs filled with capillaries, which are microscopic blood vessels through which materials go in and out of the blood.

The circulatory system consists of the heart, blood vessels, and blood. The heart has two receiving rooms, or atria, and one sending chamber, or ventricle. Blood was taken into the heart of the so-called veins. Veins from different parts of the body enters the right atrium and left. Blood from both atria into the ventricles and then pumped into the arteries, which are blood vessels that carry blood from the heart.