✖
Home History 7 Historic sites in the city of Medan

7 Historic sites in the city of Medan

Not only as it has been in the culinary Discuss in 7 Food Typical of Medan, Medan also has many historical destinations.

Palace, post office, even the water tower also has historical value here. Not to legitimate your holiday if you have not visited 7 this historic place.

A building would look fine if do not know the history behind it. So you do not fall behind Forging Historical Information Medan, then through detikTravel, has compiled historic destinations in the city of Medan.

Here are 7 Historic sites in the city of Medan

Old City Hall was established since 1900 and has witnessed the development of the city of Medan from time to time. At least, there are 12 mayors who have never had an office there. This beautiful building was going through a dark period. In 1990, the new City Hall was built and began at that moment, the Old City Hall Building abandoned and neglected. However, after the construction of hotels in tow, this building began again maintained. Location of Old City Hall in Jalan Medan City Hall and can be visited at any time. Either night or day, this building still exudes charm. The impression most remembered when visiting this building is reminiscent of the Dutch era.

Not long standing Old City Hall, the Post Office was built in Medan. The building that was established in 1909 it has a shape that is quite unique because it has a domed roof. Post Office located at Jalan Medan Merdeka Square is a mandatory destination for almost all the tourists who travel to Medan.

Despite its function is still the same, that is, as the post office, the building is almost always crowded visited by tourists. Moreover, the location is not too far from the Merdeka Walk is in the heart of Medan city makes this building strategic enough to attend. 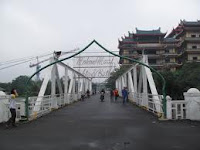 The bridge was built to facilitate the public to reach one place to another. There's the pretty old bridge, stretching over a railway line, located near the Railway Station Medan. His name is Titi Hanging. The shape is winding and has a beautiful oranamen around her body.

Buildings built in 1885 has a function early for pedestrians who want to cross without passing the railway line, and for rail passengers. Not only that, the bridge can also be used for travelers or tourists who want to enjoy the surrounding scenery from the heights. This bridge overlooks the gorgeous night lights, especially when she was there the night market at Merdeka Square. 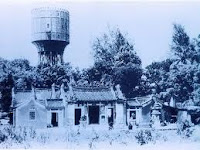 This icon Medan: Water Tower Tirtanadi. The tower is very important for the survival of the field especially those living in the Dutch colonial period. That is, not everyone can enjoy usefulness of the water tower. It is only those who can take advantage of the nobility of the water tower.

Towering buildings and striking because it has an ancient form is in Jl Sisingamangaraja I and can be seen from many places. Though it was built from 1908, but the tower is still actively working today. 42-meter-high building is now owned by PDAM Tirtanadi. Not only the nobility could enjoy the water from here, but everyone. Do not forget to capture the tower while visiting there ya! 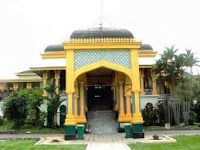 Maimun Maimoon Palace or Palace is a heritage trail Deli Sultanate rule. 2772 square meter building has 30 rooms pesegi. The palace is a major destination in the field because of its historical value and beauty of the building. In 1888, the palace was built in the architectural style of a mixture of Malay, Islamic, Spain, India and Italy.

If you wish, you can come to Talbot Village, District Medan Maimun and see for yourself how magnificent this building. The palace that dominated the color green and yellow got abandoned, but has returned after a beautiful renovation in August 2012 ago. 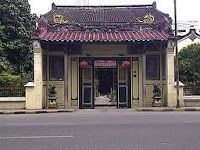 Is a Chinese origin who migrated to Medan and succeed. He was a noble and has a wealth of treasures. Increasingly, more and more large and successful business. The man who named Tjong A Fie was also a legendary person in Medan.

Now, there is a house Tjong A Fie can be visited for a bit of know and feel aristocratic life style Tjong A Fie. The house, built in 1895 is full of the pretty ornaments and carvings. The house is a mix of Chinese architecture, Malays and Europeans. You will feel attracted to the 19th century when entering and exploring the house. If you wish, you can come to Jl Ahmad Yani. The building houses like China, with a statue of a lion on the left and right as well as the green color that dominates the building. 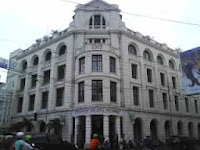 His name is unique, Building London Sumatra. Presumably so named because its shape is like building in London, where he is currently on the island of Sumatra. This stately white building stood since 1906, coinciding with the birth of the Dutch queen of the day, Queen Juliana.

Not only magnificent, five-story building so the building is also the first to have an elevator. At that time, the building functioned as a trading office and plantations. Until now, the building has another name Lonsum building remains active serves as the office. Having a central office, the building was renamed slightly so PT PP London Sumatra. Strategic location which is located on Jl Ahmad Yani General. The building is so attraction has entered so government cultural heritage field.