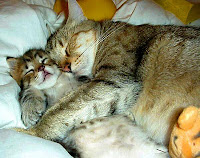 1. Cats typically weigh between 2.5 to 7 kg and rarely exceeding 10 kg, except for being fed in excess.

2. In captivity, cats can live for 15 to 20 years, with the oldest cat ever known 36 year old! Feral cats living in the modern urban environment can only live for 2 years or even less than that.

3. Cats are very clean animals included. They often take care of themselves by licking their hair. Saliva or saliva they have a strong cleaning power, but can trigger allergies in humans.

5. Believe it or not, in the middle ages cats are considered associated with witches and often killed by being burned and thrown from a high place. Some historians believe that the outbreak of the Black Death or bubonic plague spread rapidly in Europe in the 14th century was due to superstition. That is because the number of murders committed cat thereby increasing the population of mice carrying the bubonic plague.

6. In the eyes of a cat no reflective layer called the tapetum lucidum, which causes cats' eyes glow in the night. This reflective layer can absorb light 6 times more powerful than the human eye, allowing the cat to be able to see in the dark.