Please Share this article is useful !
Who does not know Fatmawati Soekarno, he was the First Lady of the First President of Indonesia, President Soekarno, and also known as heirloom sewing the flag was hoisted at the time of the proclamation of independence of the Republic of Indonesia on August 17, 1945. Fatmawati Sukarno was born on Monday, 5 February 1923 At 12.00 Lunch in the city of Bengkulu, the only daughter of the family H. Hassan Din and Siti Chadidjah.

Fatmawati childhood full of challenges and difficulties, due to the colonial system that is run by the Government of the Dutch East Indies. His father, Hassan Din was originally a Dutch company employee, Bersomij in Bengkulu. But because they do not want to abandon his activities as a member of Muhammadiyah, he then left the company. After that, Hassan Din frequently changing business and moved to a town in Southern Sumatra. 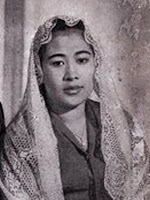 The love relationship between the Bung Karno and Fatmawti initially require a very heavy fight. In order to obtain such a beloved Fatmawati Bung Karno with a very heavy feeling forced to give up the departure of Mrs. Inggit, the woman who was so strong and sincere assist Bung Karno in the struggle for Indonesian independence. Bitter as outcasts (Dutch prisoners) are often passed along Bung Karno Bu Inggit. But history says otherwise. Travel time other wills, Fatmawati presence among Bung Karno and Mrs. Inggit has changed everything.

In 1943 marrying Bung Karno Fatmawati, and therefore Fatmawati still in Bengkulu, while Bung Karno in Jakarta busy with activities as a leader of the People Power Center (the Son), the marriage was performed by representatives of a relative's Bung Karno, overseer Sardjono. On June 1, 1943, ushered Fatmawati with her parents leaving for Jakarta, melalaui road, since it Fatmawati Bung Karno assist in the struggle for Indonesian independence. Trip this loving pair of doves, finally blessed with five sons and daughters: Guntur, Mega, Rachma, Sukma, and thunder. Not even their ship sailed home, Sukarno was unable to withstand the turmoil of his love for another woman named Hartini. This is one of the base causes of the dramatic separation between Sukarno and Fatmawati.

On Friday in the month of Ramadan, at 05.00 am, August 17, 1945 radiating dawn on the eastern horizon at the time, morning dew still hung on the edge of the leaf, the nation's leaders and youth leaders out of the house of Admiral Maeda, overwhelmed with pride after formulating the text of the Proclamation until dawn . They, have agreed to proclaim the independence of Indonesia Sukarno home that day, East Road No. Pegangsaan. 56 Jakarta, at 10.00 am. Exactly at 10.00, with a steady and clear voice, read a proclamation Sukarno, cried Merdeka was resounding everywhere and are finally able to proclaim the Independence of Indonesia to the world.

If anyone asks, what is the role of women before the seconds declaration of independence? Certainly we will remember the figure Fatmawati, wife of Bung Karno. It was he who sewed the flag of the Saka Merah Putih. After that, there was a young woman carrying a tray Trimurti and handed the flag to Latif Hendraningrat heritage and Soehoed to be displayed. And, all attendees echoed the song Indonesia Raya in Pegangsaan Road 56 East Jakarta. On that day, my mother Fatmawati participate in the ceremony and be doers of the history of Indonesian Independence.

One point the decision of the Preparatory Committee for Indonesian Independence (PPKI) its meeting dated August 19, 1945 is the pick Bung Karno and Moh. Hatta as President and First Vice President of the Republic of Indonesia. On January 4, 1946 the seat of government was moved to Indonesia Jakarta Yogyakarta because of the situation felt increasingly insecure, following the presence of a bum NICA troops allied forces arrived.

Mrs. Bung Karno Fatmawai and never celebrated anniversaries, or silver wedding Forget gold wedding, wedding anniversary 1st, 2nd or 3rd just never. The reason is not because they do not ever remember getting married. This could be because the time of the marriage, the age was bandaged war. At that time, World War II was raging and Japan came to colonize Indonesia.

"We never celebrate silver or golden wedding. Because we consider it a matter for granted, while we are always faced with major issues great and terrible," recalls Mrs. Bung Karno Fatmawati in the book The Young, published by Inter-City Library, 1978 .

Bung Karno and married life was filled with turmoil Fatmawati struggle. Two years after they married, Indonesia achieved independence. But this is not finished, just when it reached a peak of physical struggle. Bung Karno must be involved in every important moments of national struggle. The couple gave birth to her first son is Guntur Soekarnoputra. Guntur born at Bung Karno was aged 42 years. Next birth Megawati, Rachmawati, Sukmawati, and thunder. Sons and daughters of Bung Karno known to have high artistic talent. It's not surprising considering the Bung Karno was an admirer of the works of art figure, while the mother Fatmawati very good at dancing.

In the city gudeg, Mother Fatmawati get much sympathy, because of his friendly and easy to get along with all walks of life. As a First Lady, Mrs. Bung Karno Fatmawati often accompany a visit to different areas of the Republic of Indonesia to arouse people's resistance against the Netherlands and followed the visit of President Soekarno to various countries friendly. The participation of women in development has been shown Fatmawati mother, he was often a social activity, such as active in literacy, encourage activities of women, both in education and the economy. In May 14, 1980 he died of a heart attack while on his way home from the pilgrimage in Mecca, and was buried in Rubber bivouac, Jakarta. The last words before he died that time:

"Come to Mecca has become pendaman my goal. Every day I'm doing dhikr and saying confession and pleaded that given the power closer to God. Also pleaded that given by God, courage and continue the fight fi sabilillah. I pray for its original ideals are the ideals of independent Indonesia. Do not fly Indonesia Merdeka. "

Fatmawati Hospital was originally named Mrs. Sukarno's Hospital, located in the Village of West Cilandak, District Cilandak, South Jakarta area, established in 1954 by Mrs. Fatmawati Soekarno. Originally planned to be a Lung Disease Sanatorium for children. 15 April 1961 on the organization and financing of the hospital submitted to the Department of Health so that the date is set as the anniversary of RS Fatmawati. In the course of Fatmawati Hospital, established in 1984 as a referral center in South Jakarta and established in 1994 as a Class B General Hospital Education.