Please Share this article is useful !
"Million Dollar Dream" was an inspirational and motivational book titles written by Merry Riana a successful woman entrepreneur at a young age he also A Speaker, Trainer and Motivator Women become # 1 in Asia. Merry Riana who became one of her most successful Entrepreneur and motivators come from Indonesia, he was born on May 29, 1980 in Jakarta, Merry Riana was born and grew up in Jakarta in a simple family. Parents Merry is a businessman and a homemaker.

He was the eldest of three brothers. Merry journey begins in Singapore during riots in Jakarta in 1998. Ideals to lecture in the Department of Electrical Engineering from Trisakti University were dashed because of the incident. He then chose the college in Singapore to avoid things that are not desirable. Merry's father decided to send their children to study abroad. And Singapore when it is an option that makes the most sense because it is relatively close, safe environment and a good education system.

Merry began studying in college with a major in Electrical and Electronics Engineering (EEE), Nanyang Technological University (NTU) in 1998. Merry admitted majors become majors most sense to him at the time. Merry dreams of becoming an engineer. 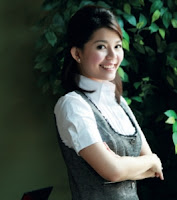 Her goal was probably because he wanted to help his father in running the business. Without adequate preparation for study abroad, Merry had failed the English test at the Nanyang Technological University. Without adequate preparation of stock funds anyway, Merry borrow funds from the Government of Singapore. He borrowed money from the Bank of Singapore Government scholarships of $ 40,000 and must be repaid after he graduated from college and work.

The funding has been minimal, because after he calculated only mangantungi $ 10 for seminggu.Untuk frugality, Merry around this by just eating instant noodles in the morning, lunch with 2 pieces of bread without butter, join seminars and gatherings in the evening after a free meal , even for minumpun he took from the water faucet / tap water on campus. It was gradually almost every day in his first year in college. Life is very alarming is encouraged to seek outside income. From start distributing pamphlets / flyers on the street, a flower shop keepers, and a waitress in the hotel Banquet.

When he realized his life did not change even after entering the second year of college, Merry began building a dream.

"I made a resolution when the 20th anniversary. I have to have the financial freedom before the age of 30. In other words, it should be a successful person. The Lowest point in my life makes me want to fulfill that dream, "said Merry.

Because no educational background and business experience, Merry gather information by attending various seminars and engage in student organizations related to the business world.

Without the experience and business knowledge sufficient, Merry plunge into the world of business. That he did because he knew that having a regular job is not enough to fulfill his dream of success at 30 years of age. He tried a variety of business opportunities. He too tried their luck with the thesis-making business, MLM business, try to play the stock, which all ended in failure. Merry also try to practice with a plunge into multi level marketing but ultimately lost 200 dollars. Merry even once lost $ 10,000 when play money in the stock business. Mentally had fallen even in these conditions can still finish college sweetheart, Merry lose all of their investment and sunk. Even so, the Merry back up and trying hard to become an entrepreneur. Merry started trying from the beginning to seriously study the ins and outs of the market. When you feel ready, he decided to pursue the financial planning industry. Merry think that's the thing that will enable him to realize his dream in a relatively short time.

Graduate from college, then Merry prepare carefully. Learning from the experience of successful entrepreneurs, he started selling sector in financial services. When Merry began his career as a financial adviser, he must grapple with a number of challenges and obstacles. His parents, faculty and friends disagree with the decision Merry. Merry time did not have the ability to speak Mandarin when more than half of Singapore's population is ethnic Chinese. As a foreign migrants there, experience and relationships Merry extremely limited. However, one reason that makes Merry unyielding was his young age and still single so he felt freer and more willing to take risks. Without feeling too overwhelmed by the possibility of failure or the need to succeed, Merry prefers to focus on the experiences and lessons that he could get during the early phases of his career. But Merry was determined. He worked 14 HOURS IN A DAY, standing near the MRT station and the bus stop to offer insurance, even he worked till midnight and come home at 2 in the morning, not to mention an uncertain income forced him back downsize to manage day-to-day needs .

Until finally he was successful as a Financial Consultant who sell financial products such as insurance and banking, kredit.deposito cards, savings, etc.. In the first six months of his career at Prudential, Merry managed to pay off his debts amounted to 40 thousand dollars in Singapore. Until 2003, Merry was awarded Top New Advisor Award coveted many people who pursue professional financial advisor. In 2004, Merry brilliant achievements promoted him as a manager. Merry and start her own business after being appointed manager. He set up MRO (Merry Riana Organization). Together with his team at the MRO, Merry has a program to empower women and young children. A team at the institute even relatively young, aged 20-30 years. "I want to accommodate young people who have ambition and passion as me," he said.

Her desire to share not only done in Singapore. On 30th birthday, Merry create new resolution, namely a positive impact on one million people in Asia, particularly in his homeland, Indonesia. In 2005, Merry received the award in recognition of Top Agency of the Year and Top Rookie award Agency. Until now, Merry has motivated and trained thousands of professionals and executives in the areas of sales, marketing and motivation. In his company, Merry overshadow 40 financial advisors, which uniquely has a young age (between 21-30 years).

Media-mediapun droves proclaiming success story and quickly Merry Riana is known as a successful female entrepreneur and a motivator to share knowledge and tips for everyone to be successful individuals who sukses.Kini, Merry Riana has a dream to provide positive impact of 1 million people in Asia, particularly in Indonesia. One of them by launching the book "Million Dollar Dream" is very inspiring and will be appointed to the big screen.

The book "Million Dollar Dream" itself has become a National Bestseller in just one month after its release. This book attracted public attention as Singapore and Southeast Asia to write about accomplishments Merry Riana generate S $ 1,000,000 at age 26 years Initially, Merry Riana is a student at Nanyang Technological University are owed as much as S $ 40,000. Profile of success Merry Riana became known after appearing on the article in The Straits Times on January 26, 2007, titled "She's made her first million at just age 26" ("He was the first to reach one million dollars at the age of 26 years"). Merry Riana is active as a speaker at various seminars, companies, schools and the media in Singapore and several countries in Southeast Asia. He is known to actively use social networking in Twitter through his twitter account at @ MerryRiana