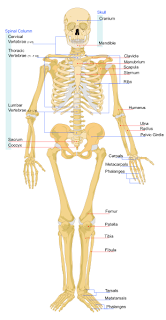 Skeletal system is an organ system that provides physical support in living organisms. Skeletal system is generally divided into three types: external, internal, and base fluid (hydrostatic framework), although hydrostatic skeletal system can also be grouped separately from the other two types in the absence of the supporting structure. Skeleton is formed from a single bone or joint (such as the skull), supported by other structures such as ligaments, tendons, muscles, and other organs. The average human adult has 206 bones, although this can vary between individuals.

Framework of the human body are grouped into two parts: A. Axial Skeleton
Consisting of a group of bones that make up the shaft body and provide support and protection to the organs in the head, neck and body.

1. Skull bones of the head consists of:

2 the skull bones of the face consists of:

mandible -attached to the temporal part of the skull. it is the only connection between the bones with a freer movement

Mandible -make up part of the nose, and the palate
palatinum (palatine) -> make up a portion of the nasal cavity and the upper part of the roof of the oral cavity

Including bone sternum flat, situated in the center of the chest. on either side of the breastbone are sticky spot of ribs. together with the ribs, sternum protect the heart, lungs and major blood vessels from damage
Sternum is composed of three bones, namely:

Bone upstream / manubrium. located at the top of the sternum, ribs melekatknya where the first and second

Bone loss / Gladiolus, situated in the middle, where the ribs attach to the three to the seventh, eighth rib joint to ten.

Taju bone sword / xiphoid process, located at the bottom of the breast bone. This bone is formed from cartilage.

The ribs form a thin, flat and curved. together with the sternum to form the chest cavity to protect the heart and lungs. The ribs were divided into three parts: True rib of seven pairs. Ribs at the back in touch with the joints of the spine while the front end connected to the sternum by cartilage mediation

False rib consists of 3 pairs. The rib has a size shorter than the true ribs. On the back in touch with the joints of the spine, while the three front ends of the bones are united by cartilage that attach at one point in the sternum

Amounted to 2 pairs of floating ribs. The ribs at the back end associated with the joints of the spine, while the front end of the free.
The ribs have several functions including:

The first segment is called seven neck bones. The first vertebra of the neck bone called the atlas bone, and the second node in the form of bone or pivot player. form of bone atlas allows the head to make a move.

Twelve forms the backbone of the next segment. Backbone segments on the left and the right is where the ribs attach.

Five next segment is the pubic bone. Pelvis size larger than the backbone. Lumbar spine segments hold most of the weight attached to the body and many muscles.

Humerus / upper arm bone. Including the long bones / pipes, top end big, smooth, and surrounded by the scapula. at the bottom has two grooves is where the radius and ulna bones attach

Radius and ulna / lever and cubits. Ulna bone is larger than the radius, and attached firmly on the humerus. Radius bone has a great contribution to the movement of the forearm over the ulna.

carpal / wrist. composed of 8 pieces of bone which are interconnected by ligaments

metacarpal / palm. Composed of five hands. At the top of dealing with a wrist fracture, while the bottom associated with the bones of the fingers (palanges)

Femur / thigh bone. Including the long bones, pelvic girdle is starting up to my knees.
Bone bracelets shoulder (clavicle and scapula / shoulder blade and collarbone)

Collarbone shaped like the letter "S", associated with the upper arm bone (humerus) to form joints that generate more free movement, one end connected to the sternum and the other end connected to the scapula. The shoulder blade (scapula) are large, triangular shape and flat, located on the back of the rib cage. The main function of the bracelet is attach a shoulder muscle that allows the movement of the joints.

Bone girdle consists of two bones PINGGUNG. In young children are separated pelvis consists of three bones in the Illium (top), bone ischiun (bottom) and the pubic bone (the middle). The back of the pelvic girdle bones are the sacrum, which is part of the spinal segments. At the front there is a pubic symphysis connective tissue that connects the two pubic bones. Function bands onstage primarily to support the weight along with the vertebrae. protect and support the organs, like the bladder, reproductive organs, and as the growth of the fetus.

In general, the function of the skeletal system is to form a rigid framework with tissues and organs attached to it. System to protect vital organs such as the brain is protected by the skull, lungs and heart are protected by the sternum and rib cage. Movement of the body is formed of a collaboration between the muscular skeletal system, and therefore they are often grouped into a single name is musculo-skeletal system. order is place through the intermediary of the tendons attach muscle. Between one bone to another bone ligaments associated with the mediation