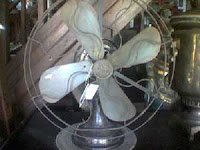 Apparently the fan goes back thousands of years ago loh. The fan is used by several countries in the world such as Egypt, Greece, Rome and China. Fans first discovered 4000 years ago in the tomb of King Tutankhamen the king of Egypt that were excavated in 1922. The function of the fan at the time was as a religious ceremony and is something very sacred and holy.

At that time only the king and queen who could have it. Fans are found in the tomb of the king of Egypt, there are two pieces. One fan was coated with gold and the handle is made of ostrich feathers, while the other was coated with gold ebony and precious stones. Well, fancy huh my friends? 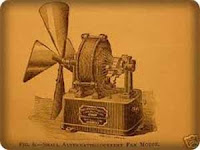 Developments fan began in the 15th century in Europe, specifically in Italy. At that time, the use of the fan is a trading product that has high artistic value. Fans symbolized prosperity and one's social class. Maybe because luxury is yes. In the 16th century until the 18th century, the fan changing fashion and function of a product is very popular at that time. Later in the 20th century is no longer a fan as a fashion product but a means of advertising. While in Spain, the fan became a tool to cool the air because Spain has a hot climate.

In the 1860's people began to recognize the fan is a fan-shaped roof. New electric fan known by the public in the 1880s. Then the electric fan was first introduced by Skaats Schuyler Wheeler in 1882. Wheeler made the first electric fan with two propellers driven by an electric powered motor.

Furthermore, developed and patented fan copyrighted by scientist named Philip H. Diehl in 1887. Diehl introduced the fan is attached to the ceiling. This idea later became the basis of the discovery of a fan that can move back and forth. The development of the fan continues to be a model that many of us encounter today.