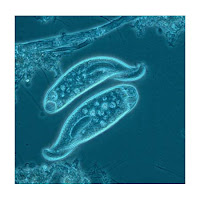 Protozoa comes from the word meaning protos meaning first and zoo animals so called as the first animal.

freshwater sea water, soil, or ektro or endoparasites, and nutrition is holozoik, bacteria, algae, and others - others. If conditions are not favorable environment in the protozoan life will form a thick and strong membrane called a cyst. Cyst, is a form of cell protozoa dehydrated and thick-walled similar to the bacterial endospores occurring. Scientist who first studied the protozoa is Anthony van Leeuwenhoek.

2. Structure and Function of the Body

The body is made up of one cell animal, so the size of micro-protozoa are up to several millimeters. Generally can not make their own food (heterotrophic). Protozoa have locomotor there is a form that is false legs, fur shakes (cillia) or feather whip (flagellum). Eukaryotic or have nuclear membrane / true core. Protozoa have no cell wall.

3. Way of Life: Living a solitary (alone) or colonized (group), Live free, saprophyte or parasite. Protozoa are able to survive in dry and wet environments.

Breeding sexually Protozoa by: a) conjugation, fusion cell nuclei in organisms unclear genitalia. In Paramaecium micronucleus that has been exchanged with makronukleus will melt, this process is called singami. b) fusion of gametes Sporozoa (Apicomplexa) have been able to produce the male gametes and female gametes. Consolidation of gametes takes place in the mosquito's body.

5. Classification: protozoa divided into four classes based on the tool motion, namely:

Moving with false feet (pseudopodia) which is penjuluran cell protoplasm. Live in fresh water, sea water, wet places, and some have lived in animals or manusia.Jenis most easily observed is the Amoeba. Ektoamoeba Amoeba is the kind that live outside the body of another organism (free-living), for example Ameoba proteus, Foraminifera, Arcella, radiolarians. Entamoeba Amoeba is the kind that live in the body of an organism, for example histolityca Entamoeba, Entamoeba coli.

Usually about 10-50 µm, but can grow up to 1 mm, and easily seen under a microscope. They move around with whip-like tails called flagella, which are used as well as sensing devices and tools to catch food. They had previously fallen under Protista family. Divided into 2 (two), namely:

Members ciliate characterized by the presence of cilia (hairs vibrate) at a phase of his life, which is used as a means of moving and looking for food. Size cilia shorter than flagellum. Had 2 cell nucleus (nucleus), which makronukleus (the core) that controls the functions of daily life in a way mensisntesis RNA, is also essential for asexual reproduction, and the micronucleus (small nuclei) that are exchanged during conjugation to the process of sexual reproduction. Found contractile vacuoles that function to maintain the water balance in the body. Many found alive at sea and in freshwater. Example: Paramaecium caudatum, Stentor, Didinium, Vorticella, Balantidium coli.

Do not have a special tool motion, produces spores (sporozoid) as a way DEVELOPMENT biakannya. Sporozoid have complex organelles at one end (apex) cells that are specific to penetrate host cells and tissues. Her life parasites in humans and animals. Example: Plasmodium falciparum, Plasmodium malariae, Plasmodium vivax, Gregarina.