The Origin of name Indonesia 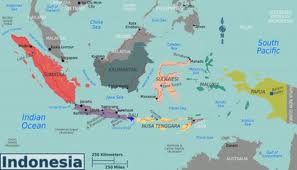 In the Dutch colonial India-Indonesia's emerging name. It was first used by two Englishmen, George Samuel Windsor Earl, a London-born lawyer, who along with James Richardson Logan, a Scottish-born lawyer, wrote an article as much as 96 pages in the Journal of the Indian Archipelago and Eastern Asia No.. 4, 1850 with the title "The Ethnology of the Indian Archipelago: Embracing Enquiries into the Continental Relations of the Indo-Pacific Islanders." They named the Dutch-western India from Proto-Malay (Melayu old) and Deutero-Malay (Melayu young), as Indunesians (Indu, Latin, meaning: India; Nesia, he is nesos origin, Greek language, means: islands).

Meanwhile, residents in the eastern India-Netherlands into the category of Melanesians (Mela = black. Melanesian islands = black people). Therefore, the Earl himself then tend to use the term Malay-nesians, to call India-Dutch residents of the west. Then Logan Indunesia change into Indonesia (Indos and Nesos, both derived from the Greek) in his writings in the Journal.

Adolf Bastian, a German physician and also ethnologist, who popularized the name of Indonesia when it publishes travel and study in Berlin, which was published in the work of five volumes (1864-1894) entitled "Rodel, oder die Inseln des malaysischen Archipels" (German , meaning: "Indonesia, or the islands of the Malay islands"). Volume I called the Moluccas, vol II East and Surrounding Islands, Volume III and Surrounding Regions Sumatra, Kalimantan and Sulawesi vol IV, Volume V Java and Closing.

Since the first until now, scientists prefer to use the term European / Latin or Greek word for naming things with respect to scientific, as well as to call the race populations in Malaya and the Dutch parts of western India.

Eduard Douwes Dekker, in his book "Max Havelaar" calling India and the Netherlands with the name Insulinde Dutch variation for Indian Archipelago. When Indische Partij (Party of India) which was founded by his nephew was banned by the Dutch Government of India in 1913, its members founded the Party Insulinde.

Both Indunesian, Rodel or Insulinde all means Indian islands, to indicate the identity of the indigenous who live in the western part of India and the Netherlands, while those living in the east-Flores, Timor, Maluku and Papua-fact is people Melanesia (Islands people black ones).

That included the first use of the word Indonesia in the early 20s was the Indonesian Association in Holland, Sam Queen Langie and the Communist Party of Indonesia. So said Indonesia, which until now used by the Republic of Indonesia means none other: India Islands.

Besides Indonesia, which uses the name "created" by the British and later popularized by the Germans, also Phillipina (Philippines), which still uses the name of the colonial legacy. When the Spaniards overran the area, as a tribute to the king of Spain, Phillip, colony was named Philippina.

Many countries after independence rename the "created" or given by the colonial masters, such as Ceylon became Sri Lanka, Burma became Myanmar, Indo-China into Vietnam, Rhodesia became Zimbabwe, the Gold Coast became Ghana, South-West Africa to Namibia, etc..

So if these people agreed to leave the name coined by Europeans, then Indonesia is not the first country to change the name of the relics of the colonial period.

History of Origin - Indonesia's proposal Name Found to be taken into consideration, to re-use a name that has more than 1000 years of use by our ancestors, that NUSANTARA.